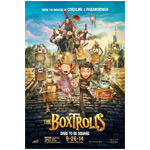 All right, stop-motion fans — The Boxtrolls is here at last!

LAIKA’s third feature-length movie boasts the widest opening of any film this week, with more than 3,400 cinemas set to show the Focus Features release. Right behind is Sony’s live-action reboot of The Equalizer, playing in some 3,200 cinemas.

The release will be the most recent test of the appeal of stop-motion. While CG-animated features from the majors expect headline-making openings, only one stop-motion feature has cracked $100 million domestic: 2000’s Chicken Run.

Most prognosticators expect The Boxtrolls to finish the weekend in the same range as Coraline and ParaNorman; time will tell.

Critics on the other hand have been pleased with the results. Rotten Tomatoes has the Boxtrolls at 71 percent “fresh,” while Metacritic gives it a solid 63.

Like the company’s previous features, including the sublime “Coraline” and the nutty “ParaNorman,” this one, directed by Anthony Stacchi and Graham Annable from a script by Irena Brignull and Adam Pava, plays down sentimentality and didacticism in favor of clever verbiage and loving attention to visual detail. The expected lessons about self-reliance, open-mindedness and friendship are delivered without too much fuss or ceremony.

Like much of the best animation, “The Boxtrolls” is above all a marvel of craft. Just before the final credits, we catch a glimpse of the labor involved — a fast, funny riff on just how painstaking the work of creating a kinetic stop-motion universe can be. And yet it looks like child’s play.

Even so, the latest film from Laika, the Oregon-animated force behind Oscar animation nominees “Coraline” and “ParaNorman,” has many charms. That signature off-center orientation and the devotion to outsiders is always welcome in the animation house. And in the current conversation over what makes a family these days, boxtrolls make a good case for embracing different.

Surely, it’s only to the good that an animated film can include a devilish little girl like Winnie lamenting that the Boxtrolls aren’t as fearsome as foretold: “I was promised rivers of blood!”

The trades were less taken with the movie, with both The Hollywood Reporter and Variety coming down more on the con side than the pro. Variety’s Peter DeBruge writes:

They’re not cute, they’re not funny. They’re neither scary nor special nor even all that original. Ladies and gentlemen, they’re “The Boxtrolls,” and as animated kid-movie characters go, these drab, cardboard-clad critters are about as compelling as a bunch of pet rocks. 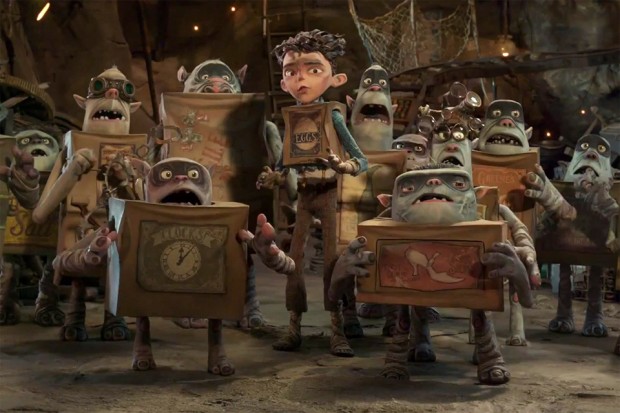