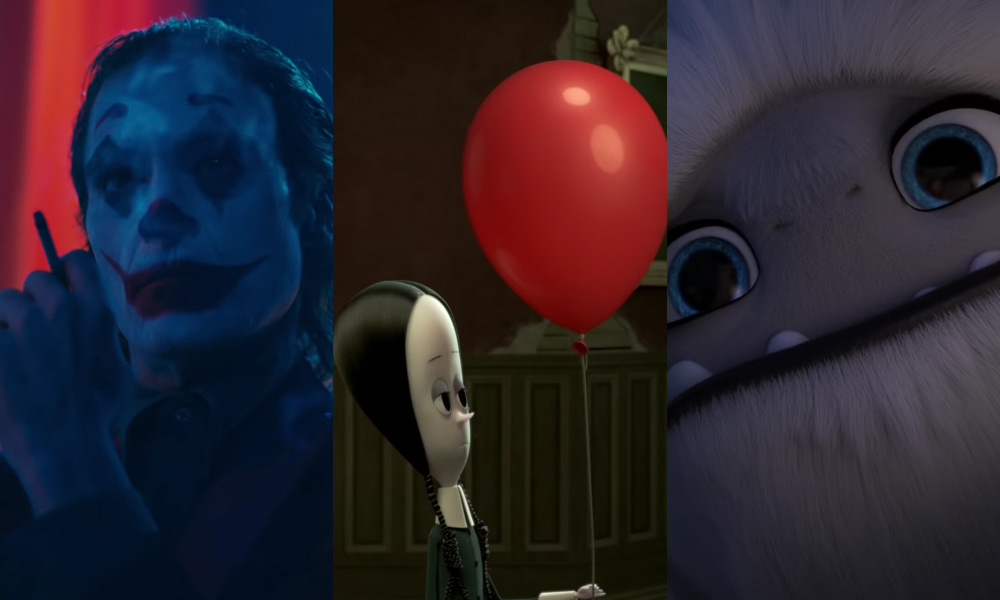 Joker, The Addams Family, and Abominable

Early box office numbers are coming in for this weekend’s offerings and things are looking good for Warner Bros. with Joker on track to earn $45.8 million, according to industry predictions. Topping last weekend’s box office, Joaquin Phoenix’s turn as the titular Joker debuted as the fifth-largest domestic opening of 2019 with a whopping $96.2 million, and is expected to dominate this weekend as well. If current estimates for Joker hold, the film will pass $185 million on Sunday night to become the eighth-biggest title of 2019 in North America.

Meanwhile, MGM and United Artists Releasing’s animated feature The Addams Family has already made $9 million, including $1.25 million in previews, and is projected to earn up to $30 million for its debut weekend. With an all-star voice cast including Oscar Isaac, Charlize Theron, Chloe Grace Moretz, Finn Wolfhard, Nick Kroll, Bette Midler, Allison Janney, Elsie Fisher and Snoop Dogg, the PG-rated film is aimed at family audiences, and follows Morticia, Gomez, Wednesday and Pugsley as the Addams family brings its special brand of ghoulish delight to 21st century life in New Jersey. Reviews of The Addams Family have been critical, however, earning the CG-animated feature a 32% score on Rotten Tomatoes.

Also opening this weekend is Paramount and Skydance Media’s Gemini Man, which is directed by Ang Lee and stars Will Smith. The sci-fi thriller made $7.3 million on Friday, including $1.6 million in previews, and is projected to earn somewhere between $19-20 million from 3,642 theaters for a third place debut.

Now in its third week in theaters, DreamWorks Animation and Pearl Studio’s Yeti adventure Abominable is in fourth place, bringing in $1.8 million from 3,496 theaters. Directed by Jill Culton, and set in modern-day China, the CG-animated feature is expected to earn $7.7 million from the weekend for parent company Universal for a total of $49.5 million.