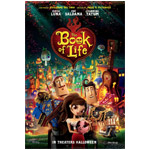 The Book of Life brings animation back to America’s multi-plexes this weekend, pitted against some relatively heavy competition.

The animated feature from Reel FX is directed by Jorge R. Gutierrez and distributed by Fox, which is opening the stereoscopic 3D movie wide at about 3,000 cinemas.

With competition including the Brad Pitt World War II action film Fury — opening wide at more than 3,000 theaters — and the romance The Best of Me at some 2,600 theaters, Book of Life is not widely expected to top the weekend. Entering its third weekend of release, Gone Girl also will pose some competition.

But the response so far to The Book of Life — read our cover story on the making of the movie here — has been positive. Metacritic had it at a 64 rating based on only 12 reviews; Rotten Tomatoes had it at 67 percent fresh on 22 reviews.

Entertainment Weekly gives the film an A- rating, with critic Marc Snetiker writing:

“Overflowing with hyperactive charm and a spectacular sea of colors, it showcases some of the most breathtaking animation we’ve seen this decade.”

Trade publications The Hollywood Reporter and Variety were overall positive, with a few quibbles.

“Proves to be perfectly charming in relaying the tale of a lopsided love triangle set against the backdrop of Mexico’s Day of the Dead holiday. And yet it hardly matters what the characters are saying (or occasionally singing) when their warmly handcrafted appearance keeps stealing the spotlight.”

Frank Scheck writes for the Reporter:

“Steeped in Mexican folk art and inspired by that country’s holiday the Day of the Dead, The Book of Life is a visually stunning effort that makes up for its formulaic storyline with an enchanting atmosphere that sweeps you into its fantastical world, or in this case, three worlds.”

Of course, we’re interested in your reaction to the film, so share them in the comments below — after you’ve seen the movie, of course! 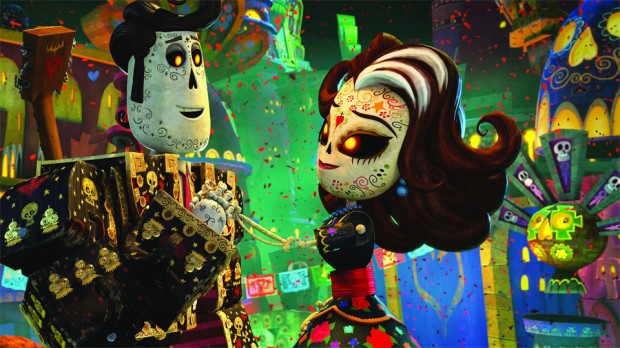 You may also like...
Related Topics:Day of the Dead, Fox, Frank Scheck, Fury, Geoff Berkshire, Gone Girl, Jorge R. Gutierrez, Marc Snetiker, Reel FX, The Best of Me, The Book of Life