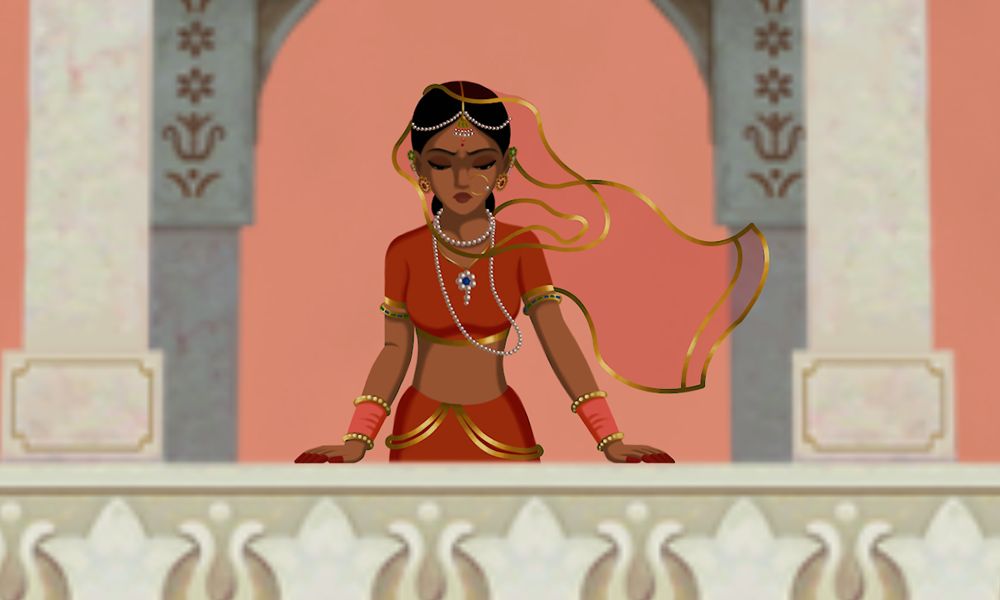 Gitanjali Rao’s poetic animated feature offers a complex view of the world through a complex and insightful feminist lens.

There is an idea posited by many philosophers that women think through their bodies. Filmmaker Gitanjali Rao explores this idea and others in her debut animated feature Bombay Rose, which tells a story of forbidden love between young dancer Kamala and Salim, a Kashmiri orphan on the streets of Bombay.

The power of the female gaze is evident throughout the film, and it is this that enables Rao to represent the mechanics of the world from a sensual, feminist perspective. For example, when Salim is bathing or dancing, we are aware that we are seeing him through Kamala’s watching eyes. Rao plays constantly with point of view, notably when she tells her story from the perspective of a rose – which itself represents Kamala, thematically.

Bombay Rose offers not only multiple viewpoints, but also a complex vision of reality itself through the hybrid use of different visual styles. Further, it fragments time, taking us from the linear reality of the everyday world into a space of dreams – into a stream of consciousness, you could say. Anything can happen in this realm of myth. Most critically, it is the one place where Kamala and Salim are able to express their love.

Through its rich visuals, the film reminds us that reality is vibrant and complex – in particular the city of Bombay, with its busy markets filled with intense colors. Bombay Rosefurther explores the plurality of India. On the surface, the film shows how women have been traditionally considered as commercial transactions between men – Kamala was sold in marriage, for example. When we dig deeper, however, we realize that Kamala, Tara and Miss D’Souza – three generations of resourceful, powerful, imaginative women – are the characters who actually advance the story of Bombay Rose. These are Indian women who have agency, and who have a voice.

Rao adds yet another layer of richness through her careful and effective use of music, most memorably when the story culminates in a tragic and sacrificial death, accompanied by the heart-wrenching Mexican song “Cucurrucucú paloma” – a song guaranteed to reduce me to tears at the best of times!

Above all, Bombay Rose deals with people in poverty. However, when tackling this subject, Gitanjali Rao refuses to adopt a nihilistic stance, unlike many other filmmakers. In Luis Buñuel’s Los Olvidados, for example, or in a lot of neorealist cinema, there is no redemption, only tragedy. Poverty brings fragility – it is part of being poor, a tragic dimension that you cannot escape from. But, even though Bombay Rose presents have-not characters from the poorest parts of the city, the film ultimately delivers a wonderful catharsis – a moment of rebirth, really. The final images are of an emancipated Kamala striding towards the camera, powerful and beautiful and assertive.

The Brazilian author Jorge Amado wrote: “Sadness is a plant which is omnipresent in the garden of the poor.” There is sadness in Bombay Rose, but the film’s greatest strength is that, even in the face of death, it exists in celebration of life.

Bombay Rose will be released on Netflix on March 8, International Women’s Day.