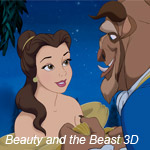 How Disney Feature Animation blended artistry and technology to bring Beauty and the Beast into 3-D.

In the midst of the stereoscopic Renaissance, with technology evolving ever more rapidly as audience demand for bigger and better 3-D features grows, it is not surprising that top studios want to give their past hits a dimensional update. Arguably, the greatest success in this venture to date was the 3-D re-release of Disney’s The Lion King last year (grossing $492 million worldwide). Now, the studio is prepping another toon classic for modern theater-goers with Beauty and the Beast 3D.

First released in 1991, Gary Trousdale and Kirk Wise’s take on the classic French fairy tale delighted audience with its magical, musical tale of an inquisitive provincial lass who grows to love the enchanted beast who takes her captive. It was critically as well as financially successful (as the first animated film to hit the $100 million mark in North America) and was the first toon to earn a Best Picture Oscar nomination.

Beauty has remained a popular, seminal film from the Disney catalog and has already enjoyed a successful restored re-release in IMAX 10 years ago. Thus, it was a no brainer for the studio to add this charming story to its 3-D slate—even if the way to achieve this was not. 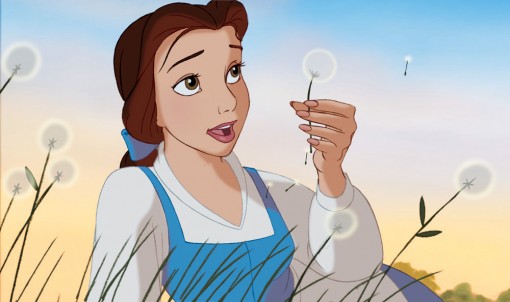 Leading the conversion effort was stereoscopic supervisor Robert Neuman, who started at the studio as a background/layout artist on Dinosaur. He later shifted to roles in the stereo departments of films like Meet the Robinsons, Bolt and Tangled. For Neuman, the research challenges involved in converting a “monoscopic” film were all part of the excitement of tackling Beauty. “The key question was,” he says, “how can we use 3-D as a storytelling tool—or, how can we build a tool to tell a better story?”

Because Beauty was one of the earliest Disney films created in its in-house, all-digital ink and paint system CAPS (Computer Animation Production System), the team had access to digital archives of all the artwork levels in each frame, allowing the conversion process to run much more efficiently. (That is, after the film data from the now-defunct 20-year-old system was reconstructed.) The film was also ideal for 3-D from a cinematic stand point, Neuman points out, due to the sense of three-dimensionality achieved by the sweeping camera work—especially in the expansive musical numbers like “Be Our Guest.”

As the second traditionally animated film to be converted to 3-D, Beauty’s conversion was an experimental process. 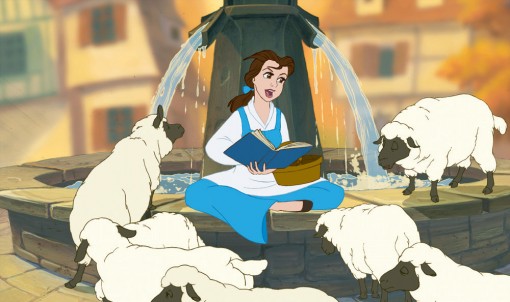 “It is inherently more complicated than converting a live-action film—taking a live-action title, you divide the image into different planes and place them in space, but you don’t have to do much to sculpt out volume and shape on characters because there are inherent dimensional cues in the lighting and shading in live-action. With flat, cartoon shading, there’s not as much built-in.”

It fell to the Disney Feature Animation technical team and CTO Andy Hendrickson to develop the tools necessary to inject the required volume into Belle, Beast and the rest of the film’s inhabitants. For Hendrickson, the goal was to build a technique and tool set that would allow the team to impart as much artistry as possible into the new dimension.

As Hendrickson recalls: “Most said it couldn’t be done, or that it would look flat and ugly, so we took that as a challenge and said, well, how can we make this look like we added a new story-telling dimension and increase the artistry of the film?” Which was easier said than done. “This is a classic example of the original idea was sketched out on a napkin on a plane trip. From there it went into about a year of research in how to do it effectively. There’s a lot of trial and error, and for each movie we refine it and further try to create new and faster ways to do it.” 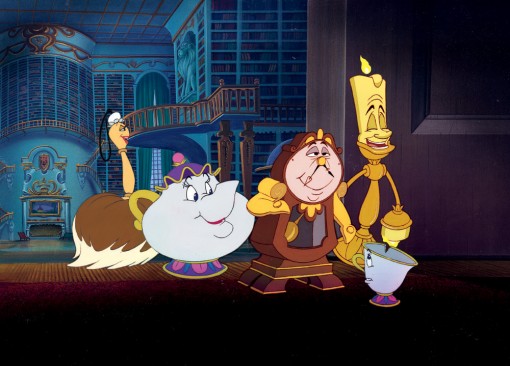 As Neuman explains, conversion was typically done by projecting 2D images onto 3-D geometry, but this created an unsatisfactory result for animation. Instead, Disney developed a system whereby artists (about 35 were involved during the peak of production) create grayscale depth maps with pixels representing depth within the screen, “sculpting” the scene nearly by hand.

The conversion of each scene began with Neuman making depth and volumetric annotations on key frames and creating a template for the artist who would tackle the shot from beginning to completion. Even this was more complicated than it sounds. Though stationary backgrounds were relatively simple, the moving characters needed special attention.

“For characters, we developed a system for grayscale models using gradient primitives—cylinders, spheres, etc.” Neuman elaborates, noting that they were also able to create segmented joints so that limbs and faces (or even teapot spouts!) could have unique depths. While a general “character inflation” attributed each character a separate shape on its own alpha channel—“Like you’d cut out a Mylar balloon and inflate it,” Neuman explains—the gradient tool system was required to sculpt out these refined details. 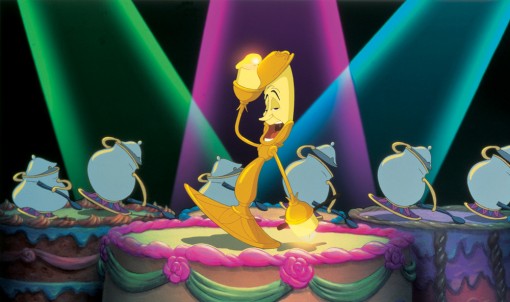 Hendrickson elaborates: “We can articulate the depth, put depth on an arm as it moves forward and backward and change its depth automatically … As an artist you set all of these parameters, creating what the depths should be, and then you let the computer help follow it through from frame to frame—it’s almost like key-framing.”

Despite the partial automation, Hendrickson asserts that the artist’s input is crucial because the animated world does not follow the same rules as the real world.

“Although these worlds look dimensional in the original, they don’t obey depth in a real way, so you end up with these M.C. Escher-like artifacts where things are working in depth but they don’t collate with the size of characters and other visual cues … it creates these bizarre scenes.” 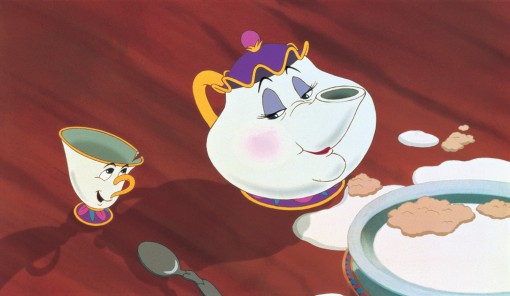 Neuman knows from hands-on experience the problems created by those ever delightful 2D animation cheats, and says they proved to be some of the most difficult shots to re-work.

“You have to re-imagine what the artist intended. Sometimes you look at it and go, ‘That doesn’t look right, she’s taking two steps and shrinking by three-quarters!’”

Further aiding the artists was a system developed to automatically assign pixels to the correct position for the left and right eye placements necessary for the stereoscopic effect, semi-automating the entire process. The new system termed “voluplane”—a nod to Disney’s multiplane camera—is the latest achievement in the studio’s long history of technological groundbreaking, as Hendrickson elucidates. 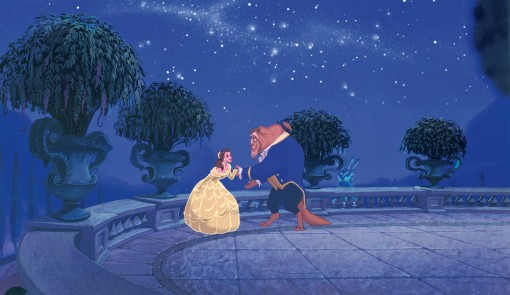 “We took the multiplane camera and almost 20 years ago turned it into CAPS—an Academy Award-winning system. What we built here is a multiplane system, but instead of a discrete number of planes you have infinite planes, and every element can be inflated in depth. Instead of Belle’s face being on a plane that represents a foreground character, her face can be rounded in depth. The voluplane allows us to breathe new life into the movie by creating volumes of characters and volumes of scenes instead of flat planes.”

While the 3-D revamp of Beauty was a learning project, and quite a bit of cycling was required to determine whether enough dimensional detail was achieved in each shot, by the time the team hit stride and they were able to achieve an average of two completed shots per artist per week, according to Neuman. And in the experienced stereo supe’s eyes, the trial and error have really paid off with the blend of story-telling magic and artistic integrity they set out to achieve.

“There are so many good shots,” Neuman says after a contemplative pause when asked about the most impressive result in the completed film. “It’s fun to see because the 3-D can really add a lot to an action scene, like when the wolves are attacking Beast, or it works in the quiet kind of romantic moments. One of the scenes where I think you can really see the potential of it was the scene when Belle encounters Beast in the castle. It’s very dramatic, there’s a kind of volumetric light in the air—the 3-D really enhances the drama of that.” 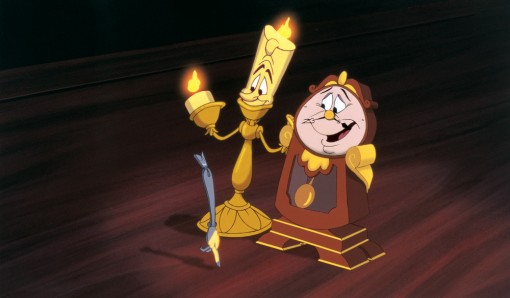 Since Beauty has wrapped up, Neuman, Hendrickson and their collective force of artists and techies have moved on to their next challenge: bringing The Little Mermaid into the stereoscopic realm. This project will be doubly difficult without the advantage of digital CAPS archives. But Hendrickson is confident it can be worked out—after all, his crew has filed six patents for various technologies developed during the Beauty conversion. Together with research partners across the globe (such as Carnegie Mellon and ETH Zürich) Disney Animation will continue to blend the latest breakthroughs with its longstanding creative traditions.

“Disney has always been this balance of art and science, and it takes both,” Hendrickson summarizes. “You can’t just to the science and you can’t just do the art, it takes a combination—and it’s been that way since Disney Animation began, 50-plus movie ago.” 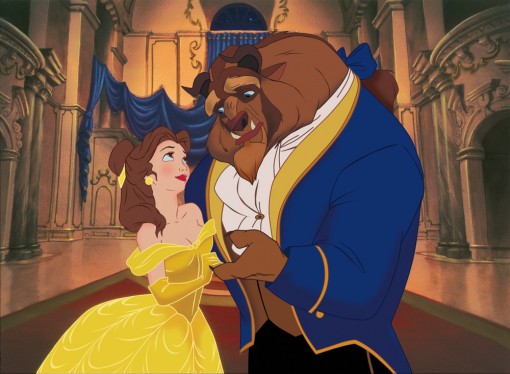 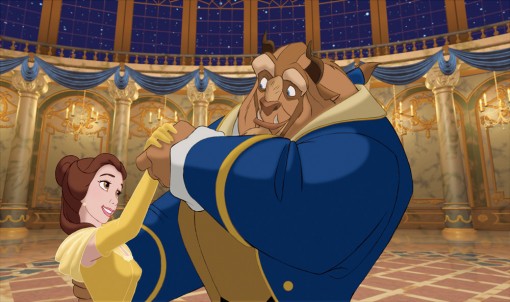 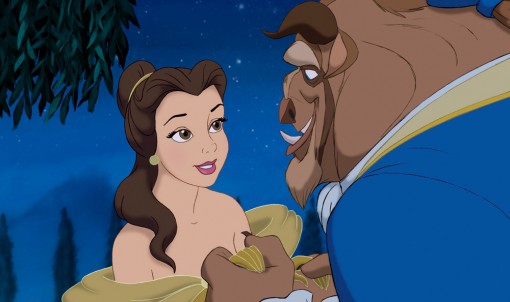