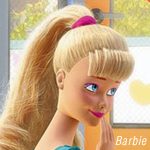 That perfect couple of toydom — the always-fabulous Barbie and her beau Ken — are coming back to the big screen in a new Toy Story short Pixar is producing for next summer.

According to a series of tweets from Pixar’s Floyd Norman, the short will see the animated plastic decide to take a vacation in Hawaii. The short could be attached to Cars 2, which Pixar is slated to release June 24, but nothing has been decided for sure.

In the meantime, we’ll have to tide ourselves over with clips like this of the classic duo meeting for the first time in Toy Story 3. Barbie is voiced by Jodi Benson; Ken by Michael Keaton.