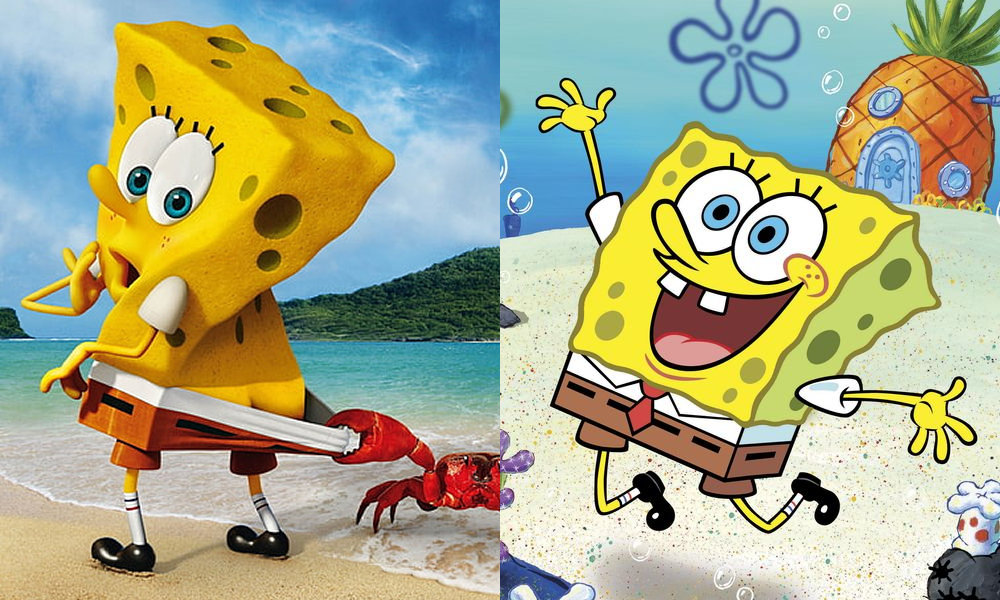 Porous and Versatile: SpongeBob SquarePants is one of many popular cartoon characters to be animated both in 2D and in 3D.

When producing a movie, music video, commercial or personal project, and the decision to use animation within said production is made, how do you know which type of animation to choose? To oversimplify, animation can be split into two worlds: 2D and 3D, each designation referring to the number of dimensions used to produce the animation.

What Is 2D Animation?

Any hand-drawn, hand-painted Disney classic, from their 1937 debut masterpiece Snow White and the Seven Dwarfs to their final, traditionally cel-painted 1989 animated hit The Little Mermaid, are great examples of 2D animation. The wonderful and timeless movies of Hayao Miyazaki such as My Neighbor Totoro and Spirited Away are other perfect examples of brilliant 2D artistry.

What makes these works of art 2D is the fact that they are hand-drawn and hand-painted on paper and cels which exist in two dimensions only – X and Y. Therefore, all of the animation is done on a completely flat surface. There is no actual height or depth to the process, other than what may be implied by illustrating such qualities (or sometimes by laying foreground cels on top of background cels).

However, 2D animation reaches far beyond traditionally hand-drawn works. For example, computers have greatly expedited the 2D animation process and made it exponentially more efficient so artists are not required to painstakingly re-draw each character in totality for each frame. Rather, they can break down animated characters into pieces, akin to a digital puppet, and animate each body part individually. Characters, backgrounds and pieces of each can be reused from frame to frame without needing to re-draw each and every line, shape and color, over and over again, x-number of times for a single second of finished animation.

Some examples of 2D computer-aided animation would be The Simpsons, Family Guy, South Park and just about anything on Nickelodeon.

What Is 3D Animation?

If you take 2D animation and add another dimension to the process, you come up with 3D animation.  Like the aforementioned 2D animation, 3D animation exists in X and Y — however, the new dimension of Z is added, providing depth. This allows the animator to visualize, move and warp objects or characters from any angle at any distance.

The term “3D animation” is most commonly used to describe the process of an animator using 3D software (such as Maya, 3ds Max, Blender, Cinema 4D, etc.) to model and animate objects and characters in a virtual 3D environment.

Of course, 3D animation has essentially taken over the worldwide box office since Pixar’s 1995 ground-breaking release Toy Story, and earned countless multi-billions of dollars across a dizzying array of debuts and sequels from multiple studios.

If you were to one-up 3D animation software, there is actual 3D animation where animators use real-world objects in real-world settings with real-world lighting. This is often referred to as “stop-motion” or “stop-frame,”  where animators move objects and pose characters incrementally, quickly move off screen, and take a single snapshot of the scene. This process is repeated tens of thousands of times to make a feature-length stop-motion movie. Examples of this style of animation are The Nightmare Before Christmas, Coraline and The Wrong Trousers.

While stop-motion does not typically fall under the 3D animation umbrella, I propose a paradigm change or at minimum a new category: Real 3D — as you can’t get more 3D than actual, real-world objects.

Which Path to Take?

If you are looking for a hand-drawn, sketchy style of animation (think Disney’s The Rescuers or most anything by Chuck Jones), you’ll need to go the traditional, hand-drawn 2D route. Try as they may, the world’s greatest software developers have yet to create the perfect filter, app or plug-in to make 3D animation feel like organic, natural-looking, hand-drawn sketchy goodness.  Some have come close, but there really is no substitute for the real thing.

If you are looking for more of a flat style with solid shapes, harkening back to the classic Sunday morning newspaper comics of yesteryear, (think Aqua Teen Hunger Force or The Casagrandes), 2D is still the way to go, but in this case it will be software-driven 2D animation as opposed to hand-drawn.

If you want the sparkle, shine and incredible detail of animated blockbuster movies such as Despicable Me and Frozen, 3D animation is the only way to go. It is literally impossible to add anywhere near this level of detail and fluidity of motion without a skilled team of animators using high-end 3D animation software.

With all of the options available, visual style should be the primary consideration. The number of dimensions you use to produce your animation doesn’t really matter because, once finished, it will ultimately be viewed as a two-dimensional work of art on a flat screen.

Martin Grebing is the president of Funnybone Animation Studios. He can be reached via funnyboneanimation.com.