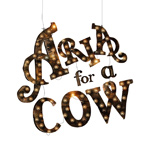 A new animated short, titled Aria for a Cow and based on a song of the same name by the award-winning duo Howard Ashman and Alan Menken (Little Shop of Horrors, The Little Mermaid, Beauty and the Beast) has entered the first stages of real production, following an inventive new crowd funded, “guerrilla” filmmaking strategy.

“We’re a small group of passionate people from all over the globe, working in new way, finding new solutions with limited resources and using technology to leverage talent from across the globe,” says producer Connie Thompson, who heads the project with veteran Disney animator Dan Lund and filmmakers Nikitha Mannam and Amos Sussigan, who utilized the same strategy for their previous shorts Broken Wing and Swan Cake.

In keeping with the way they worked on their first two shorts, Sussigan and Mannam have opened up the animation work on this project to a virtual world of creators. Eager animators – set designers, model makers and background artists from Burbank to Bombay are now on the Aria team.

“Crowd sourcing can be challenging in terms of getting your point across over the Internet,” Mannam says. “However, when we told people we were putting on this show, they immediately grabbed their toolboxes and marched into our global barn.”

Recent joiners include Linda Bel and the San Francisco Academy of Art University. Production has just begun, with recordings set to begin in early December. The filmmakers and their “global barn” of talent–encompassing artists, modelers and animators everywhere from Burbank to Bombay–are aiming for completion by spring 2014.

Aria for a Cow