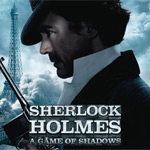 It was a no-brainer for Chas Jarrett to return to the world of the world’s greatest detective as visual-effects supervisor on Sherlock Holmes: A Game of Shadows.

“It was a perfect opportunity to really try to up the quality of the work because you’re not scrubbing around any more trying to figure out what you want it to look like,” says Jarrett, who also supervised the effects on 2009’s Sherlock Holmes. “You already know all of that, so we could make decisions about how things would look more quickly and more efficiently because of that.”

As with most sequels, A Game of Shadows ups the ante in almost every respect. For Jarrett, a former CG animator, technical director and member of the board of directors of London’s Moving Picture Company, the world of Sherlock Holmes is full of challenges suited to his talents and esthetics. 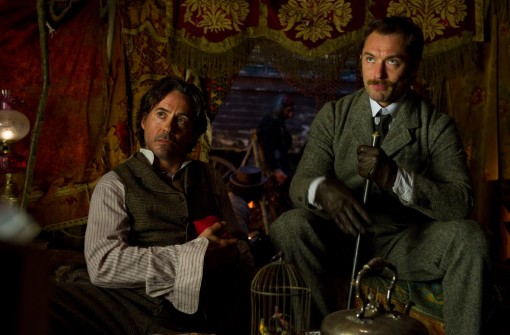 “I still very much like working with live-action elements and real stuff,” he says. “I’d rather send someone out to photograph a building that has incredible texture and history to it rather than have them paint it from scratch from their own mind.”

This modern take on Arthur Conan Doyle’s famous detective involves creating stylized environments, with the story breaking beyond the confines of London proper to Paris, Germany and the Swiss Alps, even though the filmmakers stayed at home in England.

“The trick was just how many different environments there were,” says Jarrett. “And it’s a world that we’ve all kind of seen before, so getting it to be really truly invisible was really truly the tricky bit.”

Maintaining the strong visual vocabulary of the first film and deepening it for the sequel required a lot of cross-department collaboration. Jarrett says he and his crew worked closely with production designer Sarah Greenwood and director of photography Philipe Rousselot to improve upon the look of the first film. 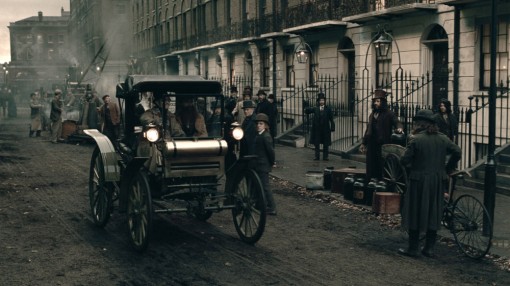 Around 1,400 effects shots were completed for the movie, though a few sequences were cut in editing and the final count is around 1,200—with only about five shots having no effects in them at all, says Jarrett. That’s a significant bump from the 800 shots in the first film and required a disciplined and streamlined approach to complete on time.

On this movie, Jarrett says it was an advantage to have the story set in real places but a different time, because he has tons of reference but also flexibility to change things. One key example is the Paris Opera House, which — along with every shot of Paris in the movie — was a pure digital creation.

“It’s not a perfect recreation of the real place,” he says. “It has changed, and we changed the proportions, the scale, and moved some things around a little bit.”

The film made extensive use of pre-viz, though in a way that Jarrett describes as more of a “tech-viz.” “The visual effects department hired art directors to work with [Greenwood], to help design those environments so everyone understood the environment we were going to create and the actors knew where to look to their eye lines,” he says. 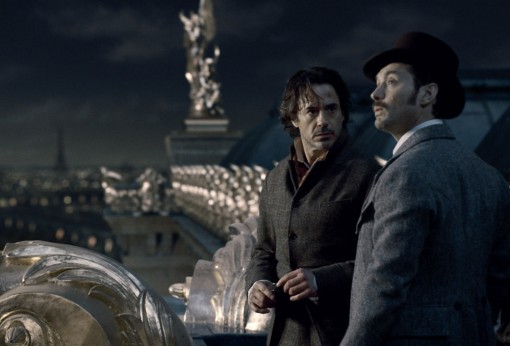 But there also was a need to keep things flexible, so Ritchie, Downey and the rest of the cast could improvise.

“Guy and Robert and everybody love to be able to show up on set and make stuff up and very rarely did I want to have to tell them we couldn’t do something.”

The climactic scene in the movie also was one of the most technically difficult, with a 45-second shot of Holmes and Moriarty falling about 800 feet from a balcony past a waterfall as they fight in mid-air—all in slow-motion. The environment is all digital, and the camera falls with them, zooming in to about two feet away from their faces and out again.

With Ritchie wanting to get the scene in a single take, the shot was meticulously pre-vized and made innovative use of a robotic arm made by the German company KUKA for the purpose of manufacturing things like automobiles. Downey and Harris were mounted to the KUKA arm with special carbon fiber harnesses made from scans of the actors’ bodies and the arm was programmed to move the actors through space against a green-screen, Jarrett says. The result was a shot that moved the actors and the camera precisely enough to get the shot at full speed and in real time with no danger to the actors.

The biggest challenge in programming the arms was in finding a common language, as KUKA made the arm for a completely different purpose than it was being used for on this movie.

“Their notion of animation controls is completely different from ours,” says Jarrett. “If you wanted the actor to be three feet higher a second earlier, you could say that, but there was no interface that would allow you to do that the way an animator would.”

Framestore in London was the lead effects house on the project, with MPC Vancouver and BlueBolt also contributing the project. MPC did more effects-heavy shots, such as one in which Watson fires a cannon and hits a tower that topples onto a building inhabited by Holmes.

But in the end, on a movie like Sherlock Holmes: A Game of Shadows, it’s better not to be noticed, says Jarrett. 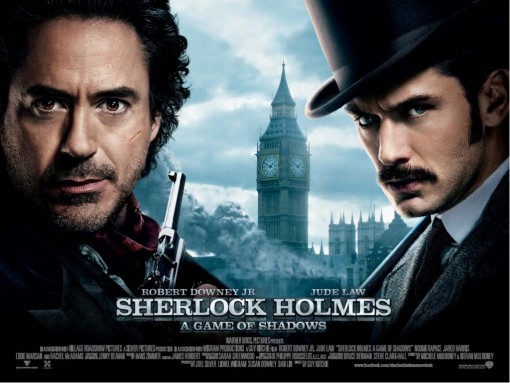 “I think a movie like this relies on the work being invisible as much as possible,” he says. “I feel like we’ve done our job if nobody notices what we’ve done.”

Warner Bros.’ Sherlock Holmes: A Game of Shadows is currently playing in theaters around the world.

The Animated Life Aquatic
Eye on the Oscars: Animated Shorts