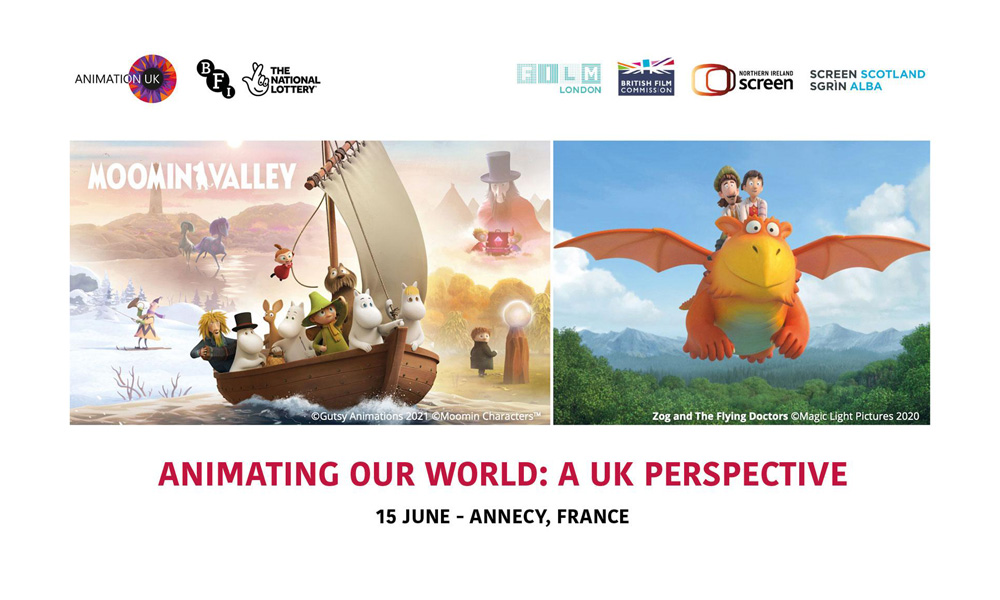 Animating Our World: A U.K. Perspective

An online panel of leading figures from the U.K. animation industry shined a light on insights, trends and opportunities in the sector in the wake of the coronavirus pandemic during Animating Our World: A U.K. Perspective, presented as part of the hybrid Annecy Festival.

As part of their commitment to the animation industry during the pandemic, a collection of national and regional agencies including Animation UK, the British Film Commission, BFI, Film London, Screen Scotland and NI Screen have joined forces to create a strong U.K. presence at Annecy this year. As well as demonstrating the U.K.’s vibrant animation sector on the panel, they have also established the online U.K. Pavilion (accessible to registered Annecy attendees).

The BFI’s Director of Industry and International Affairs Neil Peplow outlined details of their recently launched UK Global Screen Fund, which aims to increase international opportunities across the screen sector; and Julian Scott from Film London used the forum to announce a new animation strategy aimed at increasing international investment and working on sustainability and diversity.

Panel chair Kate O’Connor from Animation UK opened the session by emphasising that the U.K. animation industry was very much open for business, despite the pandemic: “Our animation sector in the U.K. shares with the global sector a huge reliance on partnership. This is something we see as so important whether that’s around sharing skills and talent, co-production or whether it’s simply about creating new worlds, new characters and new stories for a global audience.

“Animation is our passion and we are a really strong and growing sector in the U.K. We have a brilliant group of companies known for their storytelling and their technical excellence. In the U.K., we’re known for producing enduring titles, for bringing humor and pathos to the screen. We’re perhaps overly-known for preschool storytelling and characters, because actually we’re also producing animation for adults and families. We do 2D, 3D, stop-frame; we’re at the heart of innovation in terms of immersive content, XR and virtual production, providing facilities and services to companies from around the world, and this year has been no exception. We’re such a resilient sector.

“So, production levels are high, development is continuing, titles are being released all the time, awards are being won and we are really beginning to look at ways of attracting more service contracts to support our business model and the development of new IP here in the U.K.”

Looking internationally, Peplow outlined details of their recently launched UK Global Screen Fund, set up with and financed by the DCMS to support the screen sector across international distribution, international business development and international co-production to boost collaboration and help reach global audiences. He also revealed that through the fund, the BFI is looking to throw increasing weight behind data research.

“If we had the ability to give production companies and distributors access to a wider data set so that they can explore the territories which they might not currently know are opportunities, or look at ratings or eyeballs in a way which then helps them in terms of financial decisions or future international strategy, that’s something which we’ve got a research project on at the moment,” said Peplow. “We’re also looking at the international market’s perception of U.K. content to see whether or not we need to push and promote a wider message, which obviously would include animation because it’s an incredibly important part and focus of the fund, so that there’s a joined-up approach to the way that we market screen content.”

Julian Scott, Consultant for Animation and Kids’ Television at Film London, echoed the message that animation in the U.K., and particularly in London, was much in demand: “There’s been quite an uplift of work during the pandemic with live action pretty much closing down overnight. And it’s not just in features and in television. Commercials, adverts, creative agencies turned to animation studios to try and deliver commercials which couldn’t be done through the live-action process in London during the initial lockdown restrictions.”

Scott also announced Film London’s new animation strategy, identifying the areas which need addressing. These include: increasing the inward investment into London’s animation sector; continuing to work with the BFC and Animation UK to promote the benefits of the tax credit for the U.K., gathering more data and further measures to ensure the animation tax credit remains competitive in coming years; working with studios on sustainability and the environmental impact of their work; and working on diversity and inclusion in animation.

“The pandemic was a bit of a catalyst to look at what we’ve been doing, what the studios need from us, and how we can better use our resources, such as they are, to help support the studios and increase investment into them,” said Scott. “Primarily it’s all down to elevating London’s animation studios and perception around the world so we can compete creatively and financially with other key cities around the globe.”

With London producing more than 50% of the U.K.’s animation output, employing over 2,500 people, since 2012 the investment into London’s animation sector has increased from £35m to over £450m a year. Film London’s strategy aims to bolster this by working with the region’s studios and producers to help the sector grow commercially and creatively over the coming years. The new strategy draws on a study of all London-based animation studios and producers in the third quarter of 2020, which sought to understand the shape of the sector in London ahead of and during the global pandemic. The research identified six consistent areas of concern from the industry:

Film London’s animation strategy sets out key themes and actions to support the industry, from training and inclusion to funding of productions and IP development.

The org has further debuted a specially-commissioned Animation Showreel to help promote the Animation Strategy launch.

The panel also heard from producers from successful animation companies across the country who threw a light on what life has been like in the sector across the past year.

Camilla Deakin from London-based Lupus Films (The Snowman and the Snowdog, The Tiger Who Came to Tea) described how the industry has been diversifying and adapting to new trends and identified an increase in demand for adult animation: “I think one of the really interesting things that’s come out during the pandemic is the proliferation of documentary features that are using animation. I’ve noticed that directors of documentary features, when they can’t go out and shoot because of the pandemic, they’re being more creative about how they create footage. And animation has been one of those areas they’re really exploring. So, I think the audiences are very much more understanding of and appreciative of and enjoying animated content for adult audiences.”

Meanwhile, Phil Dobree from London studio Jellyfish described how the industry is likely to experience a backlog of content and a resulting pressure on talent procurement: “The forecasts are that for the next three or four years, there is a super glut of content that needs to be produced. The results of the pandemic, with people now consuming more content and the backlog of content, particularly in the live-action sector, has meant that there are now thousands of projects that are backing up and there is this tidal wave that needs to be produced. I think the biggest challenge for all of us is talent, and that’s undoubtedly where there’s going to be interesting developments over the next six months.

“Talent’s always been a competitive and problematic area and that’s very much part of the reason for the technology coming to our aid to enable talent wherever it is. But I think there’s no doubt that there is a gold rush in content demand and that will continue over the next few years by all accounts. And animation certainly has benefited from the fact that live action hasn’t been able to be going ahead in the way that it was pre-pandemic, so people have looked to animation to solve problems or to be a content solution.”