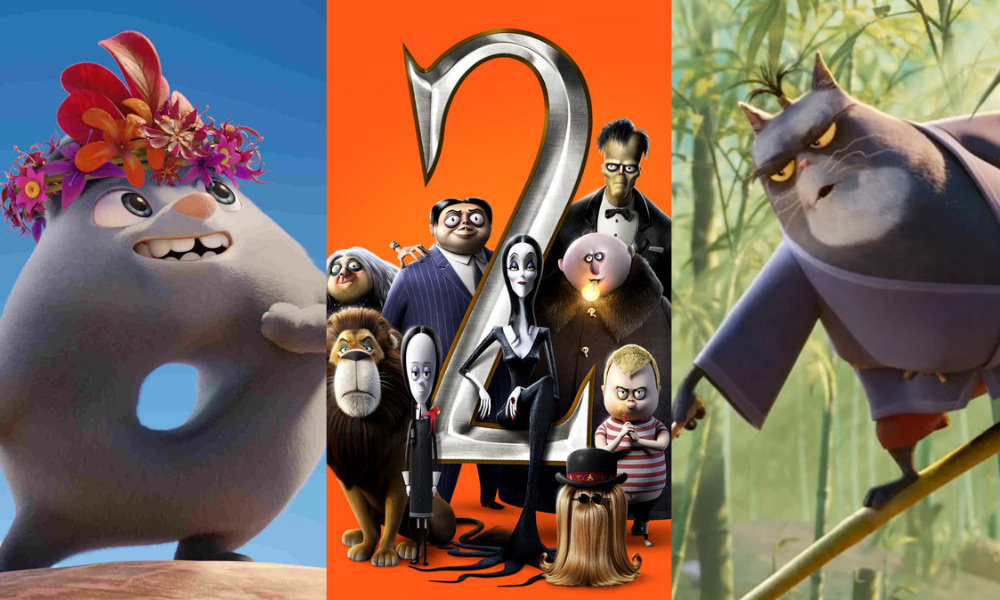 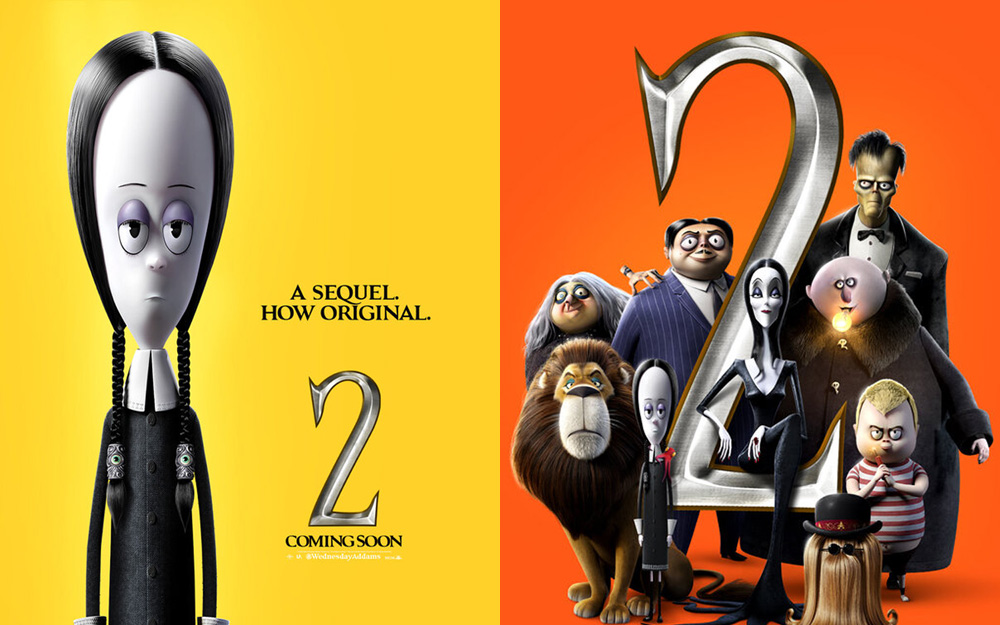 In this all-new movie, The Addams get tangled up in wacky adventures and find themselves involved in hilarious run-ins with all sorts of unsuspecting characters. Always staying true to themselves, the Addams Family brings their iconic spookiness and kookiness wherever they go.

“We had significantly less time to get this one done. The first one was a hit so MGM was really looking to come out with the second one as fast as possible; that’s why they set a date immediately, ’cause they were really excited about having a second one,” Vernon shared. “So, we are literally going from script to screen in around two years, which is pretty much unheard of for an animated movie — and the Cinesite team really, really rose to the occasion.”

Adding to the crunch, the director noted after pausing his recording for a rogue leaf blower, were the crazy and kooky interruptions during remote at-home recording sessions. “We’ve had a guy rev his Ferrari engine for 25 minutes outside — I think Chloë had to go out and ask him to stop … We’ve had leaf blowers, we’ve had wood chippers, we’ve had arguments, we’ve had all sorts of crazy — I think there was actually a car crash and a siren, like an entire movie was going on outside while we were recording this movie inside,” Vernon enumerated. “It definitely was challenging to do this, but the learning curve was pretty quick.”

Inspired by the Mel Brooks classic Blazing Saddles, the talking animal comedy-adventure Blazing Samurai is being helmed by Rob Minkoff (The Lion King, 1994) and Mark Koetsier (story artist, Big Hero 6). The film — presented by Align and Aniventure in association with HB Wink Animation and GFM Animation — stars Michael Cera, Samuel L. Jackson and Ricky Gervais. Minkoff also serves as producer and creative lead on the project, which is in production at Cinesite Montreal and scheduled for delivery later this year.

Blazing Samurai follows the story of Hank, a loveable mutt with big dreams of becoming a samurai. When he finds himself with a new job as sheriff of Kakamucho, he also finds he may have bitten off more than he can chew given the town is inhabited solely by cats. Also starring Samuel L. Jackson as Jimbo, Ricky Gervais, George Takei, Michelle Yeoh, Djimon Hounsou and Brooks.

Koetsier: “One of the unique things that [Cinesite] brought to it, which we didn’t have that much of a ‘look’ to it yet, was the flashbacks. We were looking at traditional animation, something different, maybe a different color styling altogether. What Cinesite brought to us was this comic-book look — very extreme darks, very ‘pop’ color, much like a Mike Mignola style of comic book. Very unique, very fun to watch, and they have done an incredible job on it.”

Minkoff introduced a clip from the film featuring Hank and Jimbo as the pup begins his samurai training with a perilous, painful and comedic montage. Which in a way, reflected the director’s long “back and forth, up and down, side to side” journey bringing this story to screen. But much like his scrappy hero, Minkoff had his moments of triumph.

“When we were casting the movie originally, we wanted to go to Ricky Gervais, and so we managed to connect with him through a casting director, and we sent him the script — and didn’t hear anything back for a couple of weeks. Suddenly the phone rang, and it was Ricky Gervais,” Minkoff recalled. “He said he had read the script but he was only doing things that he controlled, that he either wrote or produced … but every time he passes on something [because of this], another actor (whose name we won’t mention) would do it, and [Ricky] would have to ‘watch him ruin the script.’ He said he liked our script so much that if anyone was going to ruin it, it was gonna be Ricky Gervais.” 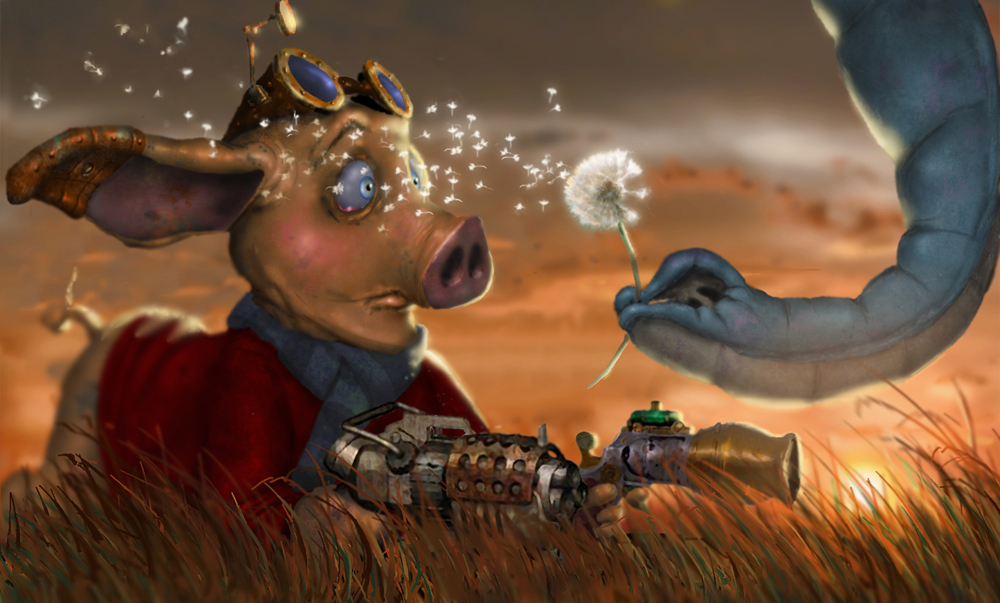 Hamming it up for Hitpig were directors Cinzia Angelini (who helmed the Cinesite short Mila) and David Feiss (Cow and Chicken), sharing development art and early animation. The Berkeley Breathed adaptation from Cinesite and Aniventure is set in a futuristic cyberpunk world and follows a grizzled porcine bounty hunter Hitpig (Peter Dinklage) who accepts his next hit: Pickles (Lilly Singh), a naive, ebullient elephant who has escaped the clutches of an evil trillionaire. Though Hitpig initially sets out to capture the perky pachyderm, the unlikely pair find themselves on an unexpected adventure criss-crossing the globe that brings out the best in both of them.

Rainn Wilson will voice the villain. Other cast members include RuPaul and Australian comedian/writer Hannah Gadsby. Adam Nagle (Riverdance: The Animated Adventure) and Dave Rosenbaum (Secret Life of Pets) are producing. Hitpig is currently in production at Cinesite and scheduled for release in early 2022.

The directors discussed the process of translating Breathed’s artwork into animation. “Really our goal was to create a world that would mirror Berkeley’s paintings, but also make it workable in a CG environment,” said Angelini. “We were able to solve it by really communicating about it within our environments, being very focused on the importance of really reflecting that look into the CG.”

As throughout the Cinesite spotlight (and many panels at Annecy and beyond this year), the filmmakers addressed the impact of COVID. Angelini noted it was important to them to “cheer up” the team after shifting to remote work. Feiss revealed one such coping strategy: “After each asset meeting, everybody’d say, ‘OK, we’re five minutes early, we’re almost done, it’s time for the joke — the ‘Bad Dad Joke.’ They’re horrible, that’s what’s great about them!” 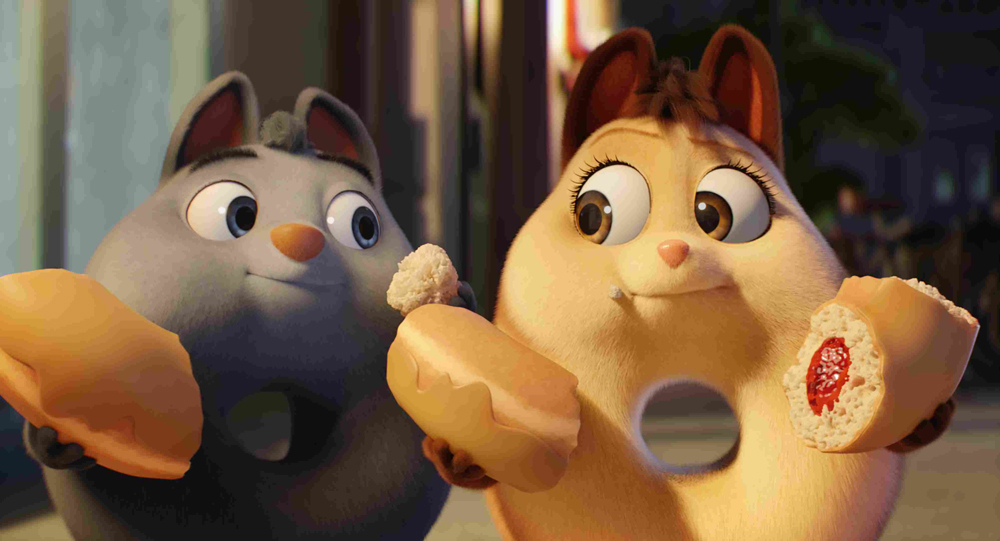 Not to be left to die out, China Lion Ent. and HB Wink Animation’s Extinct was extolled by Simpsons veteran David Silverman, who directed the original comedy-adventure. Already familiar to audiences in some territories, the film follows Op (Rachel Bloom) and Ed (Adam Devine), brother and sister flummels — adorable donut-shaped animals — who accidentally time-travel from 1835 to modern-day Shanghai. There they discover traffic, trans fats and, worst of all, that flummels are now extinct. It’s up to this bumbling pair to save themselves and their species… and, just maybe, change the course of history.

Silverman shared “a brief history of flummels” with viewers and a clip of the film’s sole musical number “Killing Time” — which he had to write because father and son composers Micheal Giacchino (Up) and Mick Giacchino had not been attached to the project. “I had to do it because it’s hard to present an animatic with no music and only lyrics and say, ‘How’d ya like the song?'” the director quipped. The tune introduces the “extinctables” — a family of odd, extinct creatures kept safe by a time-bending scientist.

“One of the biggest challenges on this film was of course we had these characters that the writers put in the script they have a hole in the middle of ’em. Well, that was a little tricky to design at first, because every design we did it looked like you had character with a comedy gunshot hole in the middle of them as opposed to something that kind of organically looked like that. … Character designer Ryan O’Loughlin came up with a good concept of it — he sort of built the character around this hole and it became a ring, kind of doughnut-looking character,” Silverman explained. “The drawings were great, but when you see this CG character you think, OK, is this gonna work?, when you see it in that sort of crucifixion pose. The animators at Cinesite really gave it a real personality and a real life. They found ways of bending it and moving it that seemed natural.”

Already available to audiences in the U.K. and Ireland through Sky and NOW TV, Riverdance: The Animated Adventure was choreographed by director Dave Rosenbaum (story supervisor, Minions) and Cinesite Chief Animation Officer Eamonn Butler. Inspired by the Grammy-winning Irish dance phenomenon, the Aniventure and River Productions co-pro follows an Irish boy named Keegan (Sam Hardy) and a Spanish girl named Moya (Hannah Herman Cortes) as they journey into the mythical world of the legendary Megaloceros Giganteus, who teach them to appreciate Riverdance as a celebration of life.

When the directors visited Dublin to meet with the stage show’s creators, Butler reveals, they came face to face with the fossil remains of one of the “impressive and intimidating” giant deer featured in the movie at the city’s natural history museum. “I thought, how are we going to pull this off? We need these things to act and talk and do the Riverdance.” The filmmakers worked with a team of talented dancers from the show, capturing the choreography in a state-of-the-art London mo-cap studio over three or four days. “Once we had that data, we handed it off to the very talented [Cinesite] team in Montreal, where they used it to create the performances that you see in the movie. In some cases it’s very little, very direct transfer from [the dancers] straight onto our human characters, but it became a lot more tricky when we tried to transfer that data onto giant dancing deer!”

The final result was shared in a clip of a whole herd of the Megaloceros dancing in tandem to the well-known rhythms, as well as an action-packed, toe-tapping trailer.