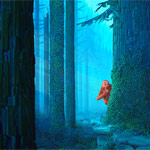 LAIKA’s fifth stop-motion feature — the cryptozoological adventure Missing Link — has received an April 19, 2019 release date from US distributor Annapurna Pictures. In case you forgot, LAIKA is the multi-Oscar-nominated shop behind Coraline, ParaNorman, The Boxtrolls and Kubo and the Two Strings.

Mr. Link (voiced by Zach Galifianakis) is the slightly silly, surprisingly smart and soulful beast who is the last living remnant of Man’s primitive ancestry, the Missing Link. As species go, he couldn’t be more endangered; he’s the last of his kind and he’s lonely. Proposing a daring quest to find his rumored distant relatives, he enlists the help of Sir Lionel Frost (Hugh Jackman), the world’s foremost investigator of myths and monsters, and Adelina Fortnight (Zoe Saldana), who possesses the only known map to the group’s secret destination, in an odyssey around the world to find the fabled valley of Shangri-La.

This humorous family adventure which speaks to acceptance and finding one’s place in the world is written and directed by Oscar nominee Chris Butler (ParaNorman). LAIKA’s head of production and Oscar nominee Arianne Sutner (ParaNorman, Kubo and the Two Strings) is producing with LAIKA President & CEO Travis Knight — who earned an Academy Award nomination and BAFTA win for his directorial debut on Kubo and the Two Strings.

AGC International is handling international sales. Lionsgate will distribute Missing Link in the UK and Ireland.