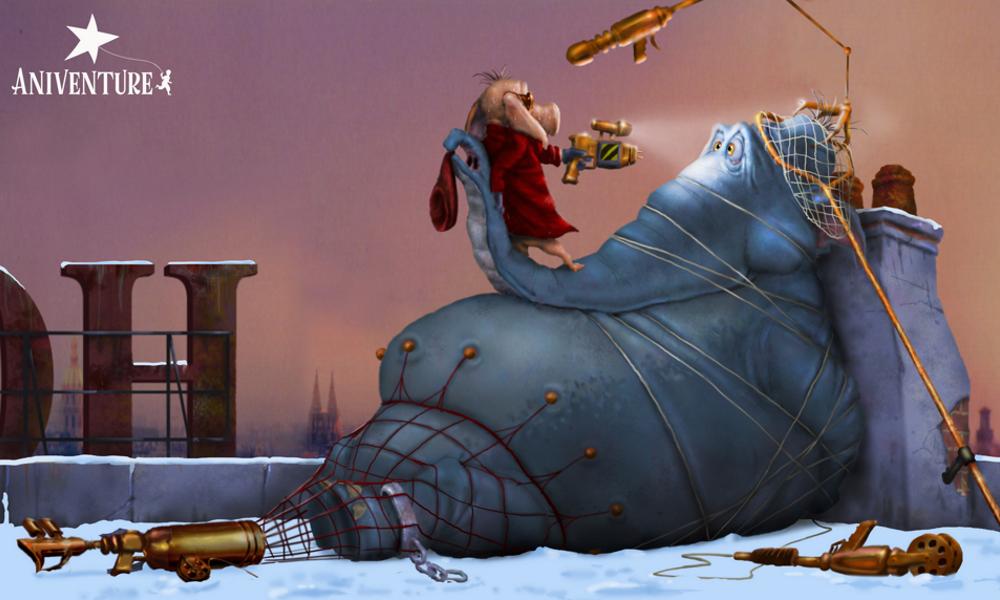 Aniventure has revealed the voice cast for its new animated feature, HITPIG!, along with a first look at the Berkeley Breathed project’s concept art and details of the porky plot.

Peter Dinklage, the Golden Globe and four-time Primetime Emmy winner of Game of Thrones, and Lilly Singh, host of NBC late-night series A Little Late with Lilly Singh, will lead the cast in the roles of Hitpig and Pickles. Rainn Wilson, best known for his role as Dwight Schrute on the NBC sitcom The Office, for which he earned three consecutive Emmy Award nominations for Outstanding Supporting Actor in a Comedy Series, will voice the villain.

Other cast members include RuPaul, the producer and host of reality competition series RuPaul’s Drag Race, for which he has received eight Primetime Emmy Awards; Hannah Gadsby, the Australian comedian and writer who won an Emmy for her stand up sensation Nanette and was nominated for her most recent special Douglas; and Dany Boon, the French comedian, actor and director who scored a 2018 César award for his comedy action film Raid: Special Unit.

Set in a futuristic cyberpunk world, HITPIG! is a riotous journey that proves sometimes what we want isn’t what we need. Hitpig (Dinklage) is a grizzled porcine bounty hunter who accepts his next hit: Pickles (Singh), a naive, ebullient elephant who has escaped the clutches of an evil trillionaire. Though Hitpig initially sets out to capture the perky pachyderm, the unlikely pair find themselves on an unexpected adventure criss-crossing the globe that brings out the best in both of them.

“Peter will bring equal parts a huge heart and fantastic humour to his character,” said Angelini.

Parimbelli added, “There is no one funnier than Lilly, but she’ll also bring a warmth and loving side to Pickles.”

Also unveiled today is some of Berkeley Breathed’s concept art for HITPIG! Breathed, who co-wrote the screenplay and is also serving as character designer for the film, is an American cartoonist, children’s book creator, director and screenwriter, best known for creating the classic Bloom County, a 1980s cartoon-comic strip featuring Opus the Penguin. At the height of its popularity, the comic strip was followed by more than 40 million readers in 1,200 newspapers. The characters Hitpig & Pickles are rooted in Berkeley’s New York Times bestselling picture book Pete & Pickles.

“When Peter and Lilly agreed to voice our lead characters, it was one of those deliciously rare voilå moments for a writer and artist when the final perfect ingredients are added to one’s cooked-up soufflé of imagination,” said Breathed. “They’ll bring heartfelt, hilarious performances to our lead characters and deliver the message and theme I had intended when I conceived the story, the hope that unexpected connection can deliver in our disconnected lives. I’m in humbled awe of our entire crew and the endless reserves of ingenuity that they’re bringing to this movie.”

HITPIG! is one of three previously announced feature films in the Aniventure slate. The London-based animation production studio has unveiled Riverdance: The Animated Adventure (produced by Aniventure and River Productions) based on the stage show phenomenon of the same name and Blazing Samurai (Aniventure and Blazing Productions), based on Mel Brooks’ classic Blazing Saddles and directed by Mark Koetsier (story artist, The Grinch) and overseen and produced by Rob Minkoff (director, The Lion King). Riverdance: The Animated Adventure, Blazing Samurai and HITPIG! will be delivered in 2020, 2021 and 2022, respectively.