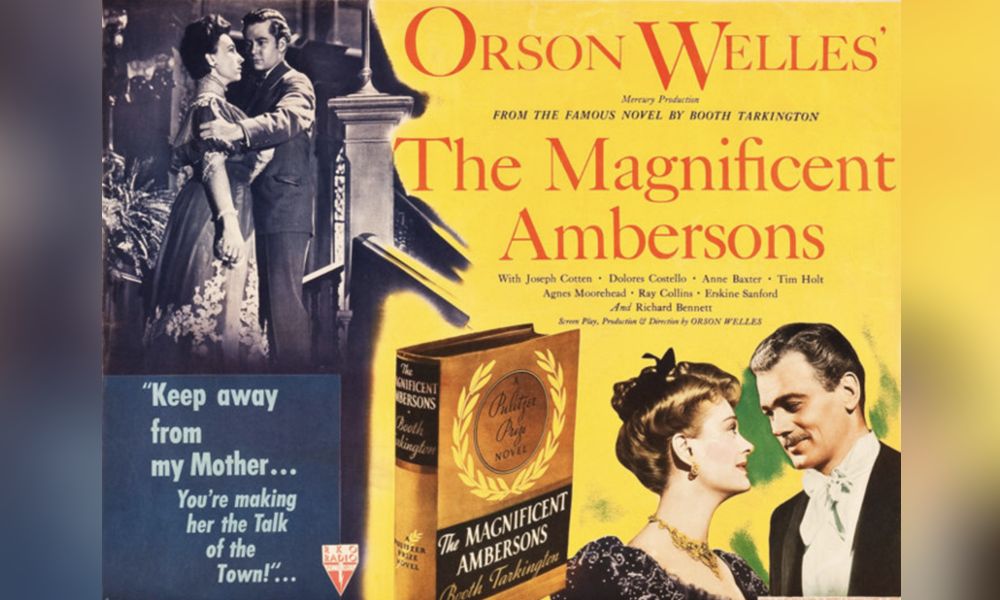 Die-hard fans of Orson Welles’ beloved 1942 classic The Magnificent Ambersons have long hoped to see the original uncut version of the movie, which was never released by RKO. Now, thanks to the efforts of filmmaker Brian Rose, the 132-minute rough draft of the movie is the process of being remastered, which will use animation and readings by actors to recreate the original version of the masterwork.

Welles lost control of the editing of his movie to RKO, and the final version was quite different from his rough cut: More than an hour of footage was cut by the studio, and a new happier ending was shot and added. Fortunately, Welles’ extensive notes for how he wished the film to be cut have survived, although the cut footage was destroyed by the studio.

Rose told wellest.net, which focuses on the life and works of the late Orson Welles, that he has been working on the project for two years. “Many scenes could be recreated thanks to surviving frame enlargements,” says Rose. “For other scenes where more complex camera movements were involved, I relied upon stills, diagrams of camera movement and the layout of the sets which, when reconstructed in a 3D space allowed a greater degree of understanding as to how Welles filmed.  This enabled a high degree of certainty in capturing what was lost in a way that will hopefully do justice to Welles’ original vision, so much so that it will be possible, for the first time, to see Ambersons in its entirety — all 132 minutes.” 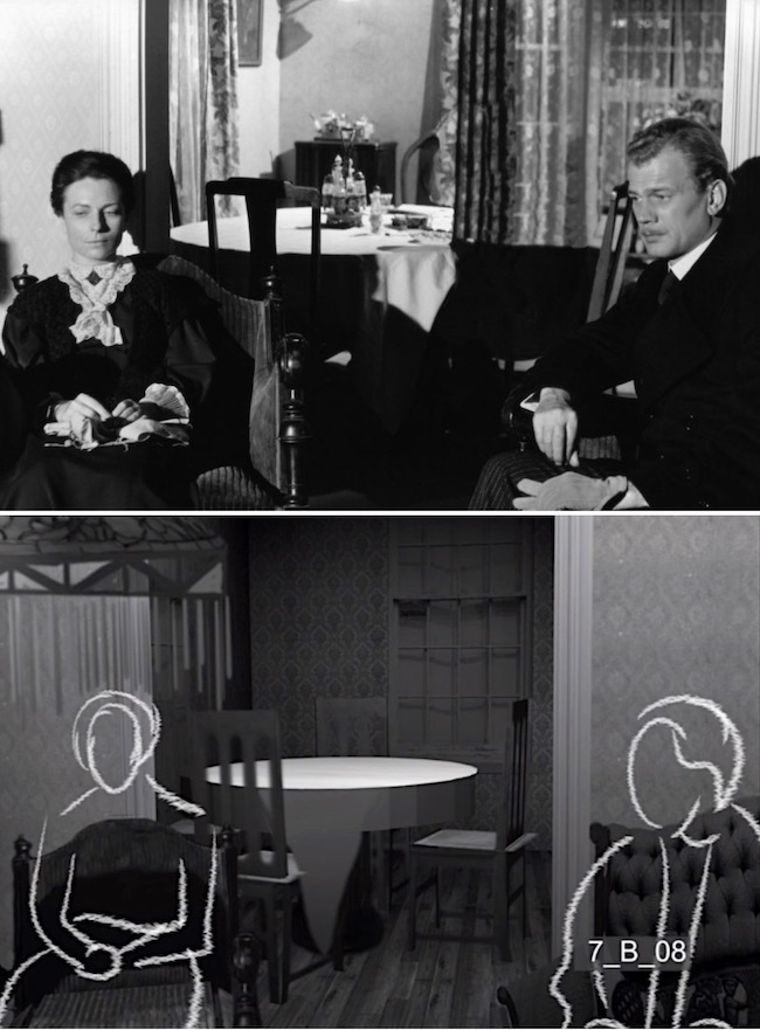 Agnes Moorehead and Joseph Cotten in The Magnificent Ambersons‘ lost boarding house scene. Below: Screen capture of early animation for a reconstruction of that scene. (Courtesy of Brian Rose)

Rose’s goal is not to create a photo-realistic recreation of the lost material, but rather something that will echo it artistically and in the form of the film’s storyboards, “a charcoal and pencil drawing come to life, so that the viewer is both aware of what is new, but also able to appreciate the film as a complete narrative.” The documentarian adds, “I compare this effort to the Japanese art of Kintsugi, which is a method of repairing damaged pottery that does not attempt to conceal the breaks, but rather highlights them, so that one can both appreciate the work as a whole, while also seeing the cracks that highlight its history as an object.” 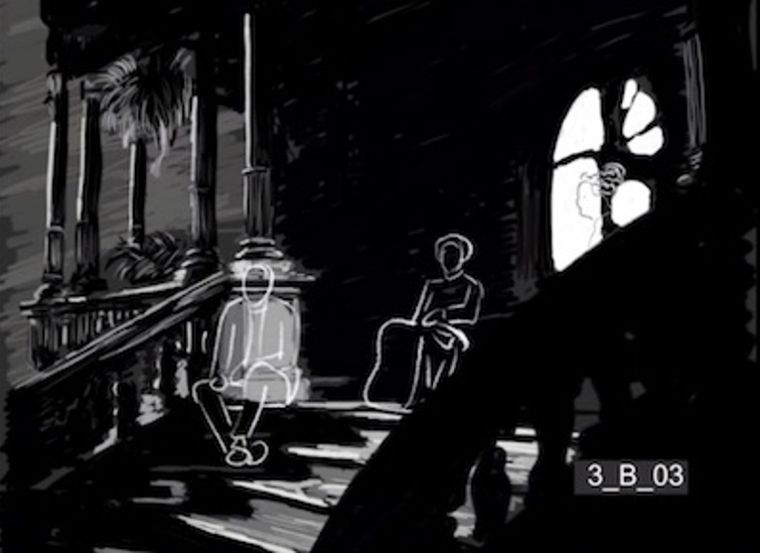 George Minafer, aunt Fanny Minafer and his mother, Isabel Amberson, talk about the rise of automobiles in an animated sequence from a reconstruction of The Magnificent Ambersons. (Courtesy of Brian Rose)

Rose is a fan of a previous restoration effort by Roger Ryan, which was shown at the Locarno Film Festival in 2005. But he is the first to use animation to fill in the missing gaps of the complete work. “As I did further research, new possibilities became apparent thanks to the available technology, such as reconstructing the sets in a 3D environment to capture a fuller picture of Welles’ original vision,” he notes. “It then seemed only natural that these recreated sets should be populated, and what once began as a small project I could work [on] while in between productions, turned into a major project two years in the works and counting.”

The Magnificent Ambersons was based on the Pulitzer Prize-winning novel by Booth Tarkington and starred Joseph Cotten, Anne Baxter, Dolores Costello, Agnes Moorehead, Tim Holt and Ray Collins and was narrated by Welles himself. The film, which chronicles the changing fortunes of a wealthy Midwestern family and the social changes caused by the automobile age, was nominated for four Oscars (including Best Picture). Rose’s new, restored version of the classic should be ready in time for the film’s 80th anniversary in 2022. 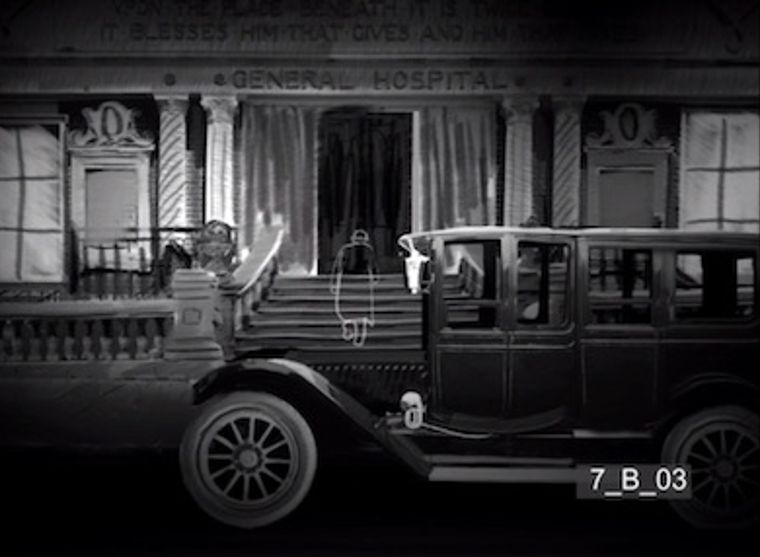 Eugene Morgan arrives at the hospital to visit an injured George Minafer in an animated sequence included in a reconstruction of The Magnificent Ambersons. (Courtesy of Brian Rose)