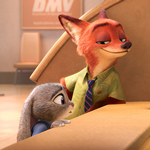 The crew behind Disney’s Zootopia digs in and does its homework to create a convincing and modern new take on the talking animal movie.

Zootopia may not be a real place that can be visited the same way you can visit Paris, New York or Tokyo, but that doesn’t mean a tremendous amount of work wasn’t put into using animation to make it seem as real as those famous cities.

The fictional locale — created by intelligent animals in a world where humans don’t exist — shares its name with the title of Walt Disney Animation Studios’ upcoming feature, in which a young bunny comes to the big city to be a police officer and finds herself having to solve a crime with a cynical and often unreliable fox in order to stay.

Directed by Byron Howard of Tangled fame and Rich Moore of Wreck-it Ralph, Disney’s newest animated feature — in theaters March 4 — takes the classic Disney idea of talking animals into a new realm with the help of the most-recent CG animation technology.

Howard says the project began about five years ago when, after finishing Tangled, he suggested the idea of anthropomorphic animal movie to Disney animation creative chief John Lasseter. “He was very much into that,” says Howard. “He said we haven’t done a movie like that in a very, very long time — especially now with CG — and it would be really exciting to see what that kind of Disney film would feel like with the new technology.”

Joining forces with Jared Bush, creator of the Disney TV Animation series Penn Zero: Part-Time Hero as a writer and later co-director, Howard dove into the research to fulfill an edict from Lasseter to make the movie look like no other CG-animated talking animal movie. “We really wanted to make sure that the world felt like animals built it and not humans, and that led to some really amazing things,” Howard says.

The story itself went through multiple iterations, starting out as a spy story, then becoming a detective yarn before settling into shape as a tale about Judy Hopps, voiced by Ginnifer Goodwin, an idealistic young bunny who leaves Bunny Burroughs for the big city and a job as Zootopia’s first bunny police officer. She meets up with sly fox Nick Wilde, played by Jason Bateman, and winds up needing his help to solve a crime in a couple of days before she has to return home a failure.

While earlier versions focused on the Nick character, it became clear in the fall of 2014 — a scant 18 months or so before the movie was to be released — that the story was about Judy.

“A lot of studios would say, we can’t do anything about it,” says Moore, who joined the production around this time as director, bringing along crewmembers like his Wreck-it Ralph head of story Jim Reardon. “But we are so lucky to have a boss in John Lasseter, who is not afraid to — when the right idea presents itself — say that’s what the story wants to be, that’s the right way to go, let’s make that change.”

Reworking the story at that point was less about a complete revamp than being creative with the work that had already been done, Moore says. “The city itself didn’t change and the characters, for the most part, were rooted in who they always were,” says Moore. “But it was a mechanical change of how do we service our themes and our tone and pit these characters against one another the best way possible.”

Supporting the story was a tremendous amount of research done by nearly every department into every aspect of animal life and civilization building.

“On this film, we needed to become animal experts and not just animal experts but also just kind of experts on human beings because it was about sort of how a society forms,” says Howard. “So we did I would say between eight and 10 months of really solid research talking to experts, everyone from safari guides to animal biologists.”

The city itself had to have a certain familiarity — it couldn’t be so wild you’d think it was built on another planet, Howard says. The city itself is divided into multiple climate zones such as Sahara Square, Tundra Town, Little Rodentia or the Rainforest District designed to be hospitable to a wide range of animal types.

“One of the most important parts of the film is that the audience really can relate to their experience of what a city is like,” says Howard. That means it needs to look like cities that the movie’s global audience could relate to. “We looked at cities all around the world, we looked at Hong Kong, Beijing, Barcelona, London, Sao Paolo … and tried to combine them all into something that feels bizarre and cool but familiar.”

Having historical buildings as well as more modern architecture was one trick to making Zootopia look like a real city. It also added a layer to the environment and the storytelling.

Designing the animals themselves was another challenge, as characters had to walk a fine line between being too realistic and not realistic enough — all while retaining a look that conveys Disney, Moore says.

“We had this amazing kind of safety net beneath us, this style that people know of Disney animals, and we were able to take those appealing designs that the audience has known and grown up with and that we all love here and for the first time really do them service in CG,” says Moore. Disney animation legend Marc Davis’ work was looked at extensively — especially since he also had created 3D versions of animated characters while working at Disney Imagineering. Other influences included Ken Anderson, Milt Kahl, Frank Thomas and Ollie Johnston.

“There’s that period of time between about 1962 and 1972 when all of those guys were at the top of their game, animation wise,” Howard says. “The draftsmanship was just ridiculously good and they were so comfortable and facile at what they were doing that they could do anything and you see such strong design choices in the animal design.”

Character designer Cory Loftis, who came to animation from the gaming industry, says his team started with a stack of Howard’s drawings of animals and by looking back themselves at previous Disney talking animal toons.

“When we think about those movies, what we remember as memorable is not necessarily the character design, but what strong personalities those animal characters have,” he says, citing as examples Baloo from The Jungle Book, Mufasa from The Lion King and Dumbo. “That’s really all about performance, so we had to make sure the characters had all the dials and all of the controls that the animators would need to deliver that performance.”

Visits to animal parks and a two-week safari to Kenya let Loftis and his crew see animals in their native environments. “There were some cool details we hadn’t noticed before,” he says. “When you see a cape buffalo in a zoo, they have this really pretty long hair, almost like it’s been shampooed. But when we saw them in Africa, they’re fighting all the time, they’re rubbing up against stuff, and they have almost no hair on their body at all. … It’s details like that that we brought back.”

Scale was another major issue, as most talking animal animated features have cheated scales to make characters closer in size for storytelling purposes. “They’ll make the mice a little big bigger and maybe elephants shrink down but everyone sort of blends into this homogenous cartoony scale where an elephant doesn’t look like an elephant,” says Howard. “So for us it was, if you’re really going to celebrate what makes animals cool, we should really hold ourselves to this and stick to what real scale is like.”

That design challenge transferred over to set design elements, such as hotels needing beds that could accommodate creatures from the size of a rhino to a shrew. “The design challenge became one of the most fun parts of the story,” Howard says.

Animating these characters was another challenge, with head of animation Renata dos Anjos’ team having to impart species-specific behavior into two-legged versions of themselves.

Another example of incorporating animal behavior into a human like variation came with the moose. “The moose has a very specific way of eating, using big lips and pulling the branches off the trees,” Hager says. “Of course, our guy has hands, so how do we make him look more like a moose and less like a man? We found that if he held the (branch) away from his head and moved his head to it, then that helped him feel more like a moose. Then we really used his lips and his tongue much more than a human would eating a snack like this.”

Howard brought his own experience as a trained 2D animator to reviews, drawing over shots on a Wacom Cintiq tablet to suggest stronger poses for the animators, Moore says,

Additionally, advances in technology allowed the directors to see fur, clothing and lighting in shots much earlier than in the past. “When we’re reviewing shots in animation, we’re seeing fully groomed characters with all the fur on, with some semblance of the final lighting and it allows us as the directors of the film to really be creative and be much more fluid than we were able to be in the past,” Howard says.

“Now you’re seeing it as an almost fully finished shot early in the process, and it takes a lot of the guess work out and it makes it that much easier to give very specific, cogent direction,” says Moore.