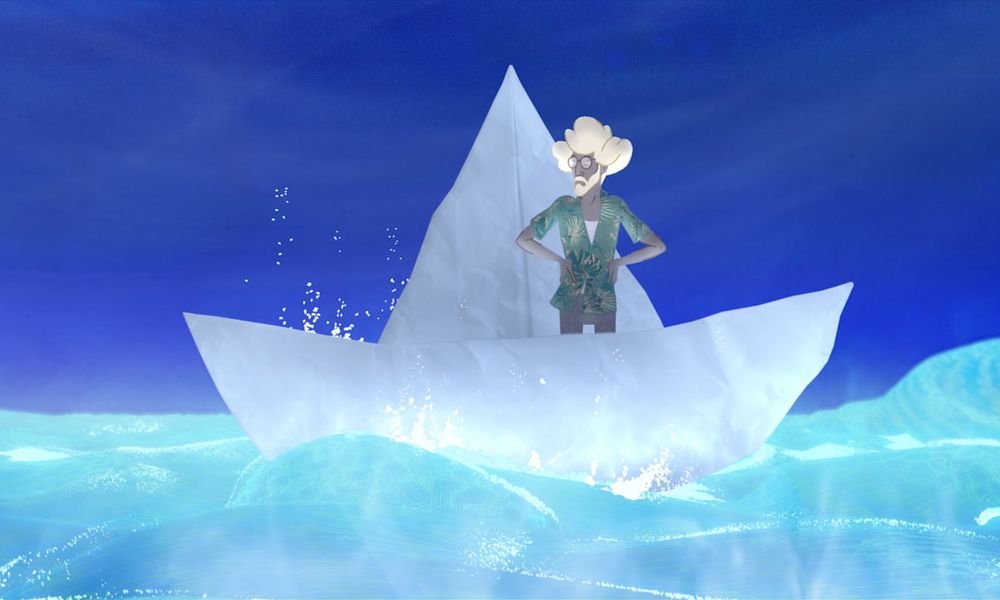 Over two years ago, Romanian director Anca Damian made a huge splash with her much-loved, award-winning feature Marona’s Fantastic Tale, which pushed the artistic envelope while telling a deeply moving story about a dog’s experiences. This year, the brilliant auteur is back with a new movie that is ready to shake up the status quo, deliver eye-popping visuals and offer some clever insights about the human condition in the modern world.

The Island, which is set to have a sneak peek at the virtual Cartoon Movie event in March, is a wild re-interpretation of the classic tale of Robinson Crusoe. However, it clearly has a lot on its mind, as Damian offers commentary on race relations, the plight of immigrants and our planet’s tragic environmental future. Did we mention it’s also a musical and features peculiar sea sirens as well?

We had to ask the bold animation director, what prompted her to follow up Marona with something so amazingly different? “The project was inspired by a concert performed by Romanian singer Ada Milea and Romanian/British violinist Alexander Balanescu about 10 years ago, which was based on the Gellu Naum’s play Insula (English: The Island), that was a reinterpretation of Daniel Defoe’s novel – Robinson Crusoe,” Damian explains. “This chain of reinterpretations would not have tempted me if I wouldn’t be interested in giving my vision on the present reality of ecological collapse and refugees issues.” 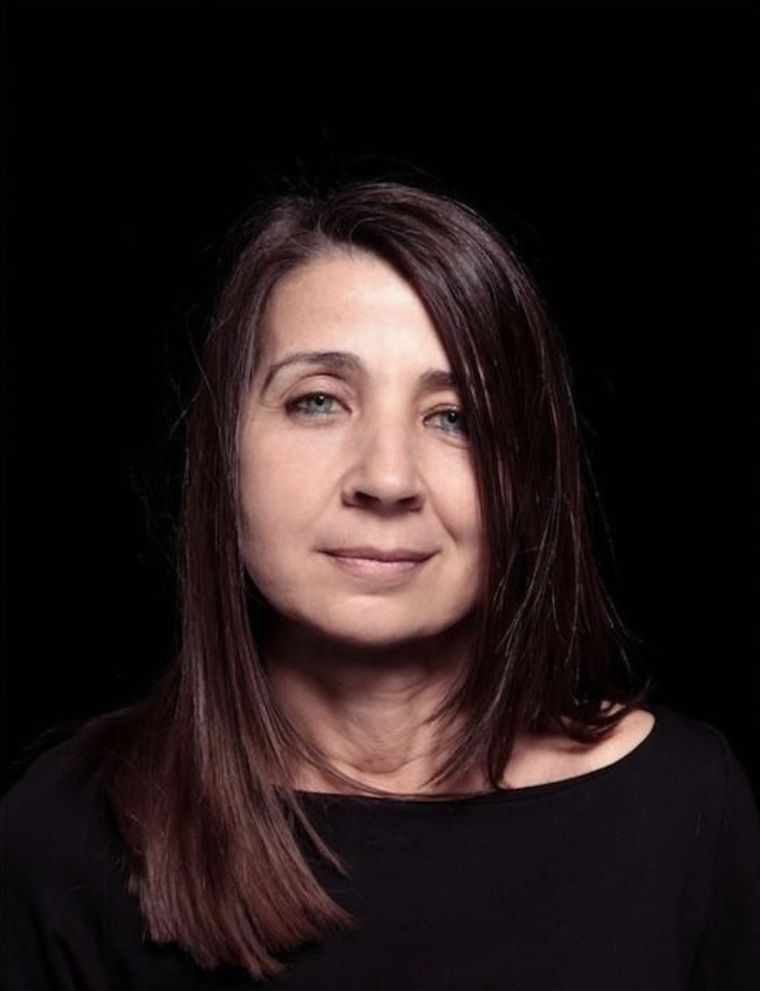 Damian says the surreal premise of the movie is taken in a purely artistic direction which departs from conventional storytelling to speak of current affairs through visual poetry and symbolism. “I take a stand about the conflict of interest that is changing the policies in Europe, but I do it with a touch of a poetic imaginary that borders the mythological tale,” she explains. “The issues are presented through highly figurative symbolism that contrasts with the light tone of the music. While the literal setting is not realistic, the statements are subtly issued through the visuals. Plausibility is completely disregarded, yet the surreal narration echoes the grim reality of the refugees nowadays.”

The animation for The Island is split between studios in Romania, France and Belgium (Aparte Film, Komadoli, Take Five) and some of the same team that worked on Marona also worked on this movie (Gina Thorstensen, Dan Panaitescu, Mathieu Labeye, Julien Dexant, Hefang Wei, Chloé Roux) as well as newcomers Gilles Cuvelier and Mathieu Perrier.

“The visual style of the animation is different from Marona,” Damian notes. “The look is immersive so we have a lot of 3D and a lot of liquid and fluid elements in Houdini. The characters are 2D but much more realistic, and have also real textures on the top, so that involved a lot of cut-out animation. The pipeline followed the same way I had done before, by giving feedback literally to everyone, on a full-time (24 hour/day) basis, and coordinating all the process. Being a much more complex animation and out of the box project, it was quite exhausting, I confess, but it was also very exciting.”

Looking back at the four-year journey of the movie, Damian says the biggest challenge was that the final film couldn’t have been imagined at the script level. Yet she still had to finance it at that stage. “As a postmodern conceptual work, the subject of the film could not be judged by dogmas of narrative structure and cinematic discourse,” she explains. “The story is structured very unconventionally, with an emphasis on the association of symbolic images. The narrative pulse is linked to the animation and is meant to flow as a poem. Images and sound (music) are placed in the foreground, emphasizing the fact that the film creates patterns in space, images-representations and vivid paintings. So, the film seeks to rediscover its primary function of spectacle, analyzing the possibilities of moving the spectator through the image and the music, rather than through the story. In its allegorical form full of irony and lyricism, the film is found in this rare vein which combines entertainment, effective surrealism and obvious absurdity.”

In other words, she explains, “It is a very out-of-the-box project, and even people who worked on the film realized what I had in my head only when it was finished. But all of those elements are also what I like about it!”

How does it compare with Marona? Damian admits that the only elements that connect her films are the themes. “All my films speak about ‘life is a love lesson,’ but in totally different registers or stories,” she notes. “The visual design is following the concept of trying to reproduce a (sur)realistic environment, where the audience should feel immersed; the beauty of the colors is highly attractive but at the same time insinuating a feeling of sickness. The colors of the sea (turquoise), of the clouds (pink) look like paradise but the chemical feeling is haunting.”

The concept is a different story: “Everything mankind does should have a realistic texture, because it never integrates in nature. I got a lot of inspiration from the Burning Man event in the U.S. As the space should be immersive, the sets are in 3D. The tone of the movie is constantly oneiric and poetic. The animation was carefully planned to create the dreamlike universe where every detail is planned to be narrative. There was a great investment in conceptual art, since it lies at the core of the story in this particular storytelling approach. The locations and the characters are charged with suggestive power.”

Music to Soothe the Savage Soul

As in Marona, music plays a very important role in The Island‘s universe. “I usually work on the music with the composer before starting the animation,” Damian explains. “Here, I had the music before writing the script. Additionally, this process was difficult as the musicians played this concert almost a decade ago, and now, I had to convince them to change it. It was also a moment when we added two additional voices (altogether a quartet and four singers) when the reality of the new reinterpretation came to life. What is also unique with this project is that I am working with a choreographer, Andrea Gavriliu, for the movements of the animated characters. It is a great joy and inspiration. In this project, all the arts have found their place!”

Now that she is inviting the world to take a peek at her latest opus, Damian hopes to open new eyes to our 21st century demons and poetic solutions. “The Island is an animated musical that offers the audience a poetic take on the solitude of the individual and the search for meaning on a planet that has collapsed,” Damian muses. “One of its strong assets is its reinterpretation of the story of Robinson Crusoe, updated to our times when we try to repair the colonist’s behavior but we are still limited by the rules and hypocrisy. Everything happens while we live through the consequences of the ecological imbalance that we created on this planet, so in a way we contemplate the end of the world. It is a colorful, poetic and funny musical fable — a mix of The Little Prince, Robinson Crusoe and Monty Python’s Flying Circus!”

Damian leaves us with her take on the state of animation in 2021. “I do think that every year, animation gains a wider audience as well as more respectability as an art form, and not only seen as children entertainment,” she concludes. “The richness of the language and the unlimited possibilities are getting their rightful place in both the history of cinema and in the eyes of audiences around the world.”

The Island is one of  55 new animated features presented at this year’s virtual edition of Cartoon Movie, March 9-11. For more info, visit apartefilm.net/portfolio-items/the-island.

Laurence Ralph Discusses the Inspiration Behind His Powerful Short ‘The Torture Letters’
The Flash Zips Thru Time to Fight Nazis in ‘Justice Society: World War II’