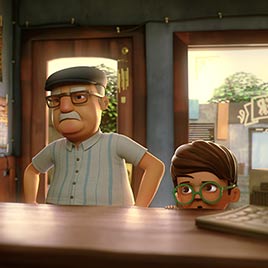 The challenges facing production on any animated feature are pretty consistent — no matter where they are being done: the need to produce a lot of high-quality work in a short time.

In the case of Kiribati, a stereoscopic 3D animated feature film in production in Argentina at San Luis Cine, the challenges are being met with an unusual tech approach that uses the open-source software Blender to animate and V-ray to render.

Ignacio Corrales, lighting director and shading supervisor on the movie, says the workflow was designed to allow artists to collaborate remotely as smoothly as possible.

“Before I started working on the movie, I wasn´t familiar with Blender at all, having grown up with 3ds Max and Maya,” says Corrales. “So I had to push myself to learn and get involved with Blender in record time. One remarkable aspect is that Blender Foundation built not only the software but also an entire workflow around it. With every new project, the Blender team tests and improves the workflow and our production team took advantage of this support, building our own pipeline on top of it. And since all artists are familiar with it, this allowed us to share tools and procedures.”

San Luis Cine is an unexpected source for an animated feature. Its output over the seven years it has been in business has mostly consisted of television and advertising content. Also, it is located in the province of San Luis, some 11 hours’ drive from the capital, Buenos Aires, putting it in somewhat remote spot that can be difficult to lure creative talent to relocate to.

It’s a move the directors, Alejandro Carlini and Marcos Valdivia, have made, along with Corrales, who originally hails from Costa Rica and is the production’s sole foreigner.

Kiribati tells the tale of Yermo, a grumpy grandfather to a dysfunctional family who lives in a retirement home with maximum security. There, with his grandson, Luisito, and a hilarious group of his friends, he plans an escape that turns into an amazing journey to the island of Kiribati.

Using Blender for a project like this requires a lot of customization, and Corrales says the production has been in constant contact with developers in Brazil, Europe and the United States to develop tools to facilitate the workflow.

An example about how Blender is designed with artists in mind is the way rigs work; instead of being several different objects, Blender has a special object-type called armature, which contains all needed bones, handlers and constraints; every armature has an action, which can be shared with other armatures and exported or imported in a consistent way. So even when the most complex character gets loaded into the scene, it consists of two objects, the mesh and the rig.

“Animation is difficult in Latin America because of the cost of licenses,” says Corrales. “In Argentina, it’s cheaper (to use Blender) than having to pay licenses for 30 to 40 people working on the production.”

The film is about 80 percent completed with animation, using a crew of 12 to 16 animators. Corrales says most of the animators are in San Luis; about five work remotely from Buenos Aires. The workflow was designed to allow the collaboration of artists working remotely from their homes, a challenging requirement for any production, says Corrales.

With a total of 1,300 shots in the film, Corrales says he expects to finish the animation within three months and move on to rendering, compositing and sound design.

“It’s really hard to get artists; lighting people are especially difficult to get,” he says.

“In Argentina, I can count (them all) on my hand. There are some in the capital, but they don’t want to move to another place.”

As a long-time V-Ray user, Corrales wanted to test V-Ray as the main render engine for the movie. Driven initially by curiosity, his communication with Chaos Group’s developer Andrei Izrantzev evolved into a useful solution for the Kiribati team. “It was a challenge switching from Blender’s render engine to V-Ray, but with some effort and constant communication between V-Ray developer Andrei, myself and the technical director of our movie, we were able to adapt V-Ray to the movie’s workflow.”

The film is expected to be finished in 2016, with producers seeking a global release.

For Corrales, the experience has been a unique one that he thinks will show through in the final product. “This is a special movie,” he says.