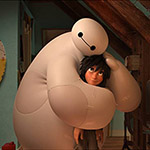 Disney taps a veteran group of animators to transform Big Hero 6 from an unlikely comic-book property into a mainstream movie adventure. By Karen Idelson.

Take an obscure Marvel Comics property, toss aside a good part of the story the book tells and reinvent the characters, their relationships, and almost everything about them and focus on new broader emotional arcs.
Sure, this might not seem like a recipe for success but this is exactly how Big Hero 6 will become the first Disney animated film to feature Marvel characters since The Walt Disney Co. bought Marvel Entertainment in 2009. And it’s important to remember Disney knows how to do this — they had incredible luck just last year around this same time with another heartfelt story loosely based on some mythic source material.
Marvel’s head of TV Jeph Loeb and chief creative office Joe Quesada were both on board with the changes, according to co-directors, Chris Williams and Don Hall.  In an interview with Animation Magazine, Hall stressed that Marvel wanted to see the filmmakers do a unique take on the source material. So, off the co-directors went, working mostly with the idea of brilliant young man named Hiro whose abilities are actually brought out when he has to overcome personal tragedy and loss lean a little on an inflatable robot Baymax, who was designed to heal others.
Emerging robotics genius Hiro needs Baymax practically as well as emotionally. When Hiro loses control of his own invention — microbots, which can be summoned to do just about anything — to a Kabuki-masked villain named Yokai, he can no longer work alone in his lab. He must reach out to those around him: robots, fellow scientists and family.
Veteran directors Williams and Hall were clearly up to the task and bring substantial experience to the project. Williams directed the Oscar-nominated Bolt alongside Byron Howard and worked in the story department on Wreck-It Ralph and Frozen. Hall directed the 2011 feature Winnie the Pooh, and served as head of story on The Princess and the Frog.
The film also shows off vocal performances by Maya Rudolph (Aunt Cass), James Cromwell (Professor Robert Callaghan), Damon Wayans Jr. (Wasabi), T.J. Miller (Fred), Alan Tudyk (Alistair Krei), Jamie Chung (Go Go Tomago), Genesis Rodriguez (Honey Lemon), Daniel Henney (Tadashi Hamada), and features Ryan Potter as lead character Hiro Hamada and Scott Adsit as Baymax.

The Face of Baymax

While Big Hero 6 is loaded with both vocal and behind-the-scenes talent, Baymax has already become the most recognizable “face” of Big Hero 6 through much of the film’s ad campaign — that’s clearly part of the design.
Zach Parrish, head of animation for Walt Disney Animation Studios, describes their work on Baymax as “un-imating” the character on many levels because they focused on stripping out anything that wasn’t absolutely necessary so he could be reduced down to his essence.
Animators also watched the movements of baby penguins and human babies walking with a full diaper while looking for inspiration in developing Baymax’s own walk. They finally settled on the baby penguin walk since the little birds manage to waddle around without engaging their arms much.
All this research and careful pealing away of anything that wasn’t key to Baymax was done with one goal in mind: To create a character that was engaging and sympathetic while also making it easy for the audience to project their own feelings about loss and family onto him. This meant that every little thing — a word, a movement — for Baymax became big and impactful. So, animators had to become quite subtle in how they used the companion robot.
Hall — with his own set of childhood fantasies in mind — was excited about one particular scene, in which the puffy robot becomes a lightning-fast rocket, for the sheer thrill of it and for the way in which it could push Hiro out of his comfort zone.
“Baymax starts thinking about how he can use situations to heal Hiro, what experiences he can create, and taking Hiro on this ride where he has to feel his fears becomes that moment,” says Hall. “It’s a great situation because it’s funny and scary and really emotional.”

After the look and feel of Baymax was established, the animation team faced another substantial challenge on Big Hero 6 — there were more than a dozen main characters for them to work with in the film. As central characters are added, each with their own set of movements, expressions and character-defining attributes, the work load naturally multiplies, so it was desperately important to have both the crew and the organization in the place to manage the work load.
Oh, and there’s one more thing. The story takes place in San Fransokyo — a portmanteau of San Francisco and Tokyo — that’s clearly full of all the hustle and bustle of both the cities implied by its name. So, animators needed to find a way to create believable crowds (in addition to working with all the main characters).
The character team, headed by Carlos Cabral, designed new rigging software named Denizen, which was pioneered by John Kahwaty, that allowed them to meet these needs. With this package, they were able to move across different character traits — body shape, face types, different sets of clothing and hair styles — easily as they populated this new world.
“We had 701 unique characters and 1,324 animation cycles,” says Parrish. “So, Denizen was very important to that process.”

All in the Details

With the enormous data sets generated by both the animation and VFX teams, the formidable rendering system called Hyperion also played a crucial role in moving the film along. The VFX team worked with the team behind Hyperion to develop specific abilities to work with water and the microbots that both our hero Hiro and the film’s villain want to control.
The microbots are mind-controlled robots that connect to each other through electromagnetism, allowing the person in charge to create all kinds of shapes, structures and even weapons. These little robots convey a ton of power to the person who can summon them. They also reflect the state of mind of their director and that’s seen to both magnificent and terrifying display in the film.
“For the VFX team, this was huge,” says head of effects Michael Kashalk. “In our average shot, there were something like 20 million microbots, and when someone evil is in charge you really see they’re chaotic and reflecting a chaotic state of mind.”
Hyperion also provided the filmmakers with expanded lighting choices, such as projecting an illuminated glow through a translucent object. And, on top of that, it’s very scalable, allowing filmmakers to reduce the quality of a shot in order to take a sneak peak at a scene before final decisions are made.
All these tools were employed in the service of telling a story Hall and Williams designed to reach out to audiences on a fundamental level. The ideas of loss and overcoming loss through friendship, family (those we have and those we choose) and teamwork were at the core of their process.
“I think we all have to struggle with loss at some point in our lives,” says Hall. “Hiro comes to that struggle early in his life and I think this could be powerful for kids who see it and see that it can be overcome by challenging yourself and moving forward, even if you don’t have your own personal robot to help you at the time.”