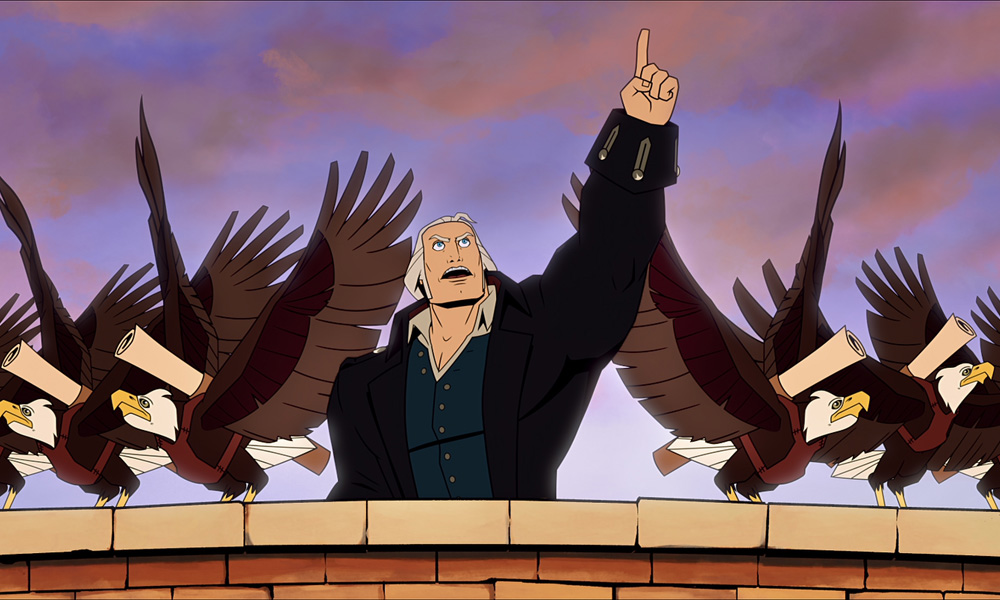 Forget what you learned in school. Turn a deaf ear to the yearly telecast of 1776. Ignore even the political donnybrook taking place in both Congress and statehouses throughout the land over how America’s founding should be taught. The record has now been set straight by America: The Motion Picture, which arrives on Netflix just in time for this year’s Independence Day celebrations!

It’s a hilariously warped record to be sure, but that’s the point. And unlike a lot of today’s other history revisionists, the filmmakers revel in the fact that they’re joking.

“It’s about the founding of America as if the story was being told by an idiot,” says director and executive producer Matt Thompson. “It’s as if the dumbest person in the world said, ‘What if George Washington and Abraham Lincoln are best friends, and they go to Ford’s Theatre where Benedict Arnold turns into a werewolf and bites off Lincoln’s head, and that starts the American Revolution.'”

And that’s only the beginning. To avenge his best bud, Washington forms a revolutionary posse comprised of a dimwitted, beer-guzzling Sam Adams; Paul Revere, “the world’s greatest horse racist;” a female, Chinese American, scientific genius named Thomas Edison; the Apache leader Geronimo, who takes up arms against the British and loses one of his own; and a hip African American blacksmith. Together they battle a diabolical, steampunky British king and his lieutenant, the traitorous lycanthrope Benedict Arnold.

It’s crazy, wild-ass American History 101.2 created by the filmmakers under the credo “No Research Allowed” and promoted with the tagline “Facts, schmacts.” Even so, screenwriter Dave Callaham (Wonder Woman 1984), who originally tailored the script as a live-action comedy, says some people still missed the joke. “When I first sent it out amongst friends and colleagues in the entertainment industry, there were a few who came back with totally straight-faced notes like, ‘Hey, there are a couple historical inaccuracies in this thing,'” he states. Perhaps those benighted beta readers were reacting to Paul Bunyan’s combat with an ambulatory Big Ben tower, or the tavern called Vietnam that our heroes wish they’d gotten out of sooner … or maybe simply that the evil king facing the rebellion is named James, not George III.

The project was greenlit while Callaham and producers Phil Lord and Chris Miller were in talks with Channing Tatum’s production company Free Association about an entirely different idea. “They asked for a writing sample and Lord and Miller gave them America: The Motion Picture,” Callaham explains. “Channing’s team said, ‘Why are we even talking about this other project? We should make this!'” Lord and Miller — Toon Town moguls who have their fingers in more pies than Marie Callender — subsequently introduced Callaham to Thompson, who is partnered with Adam Reed in the Atlanta-based toon house Floyd County Productions. Thompson loved the script and the decision to produce it in animation was finalized. The rest, as they say, is alternative history. 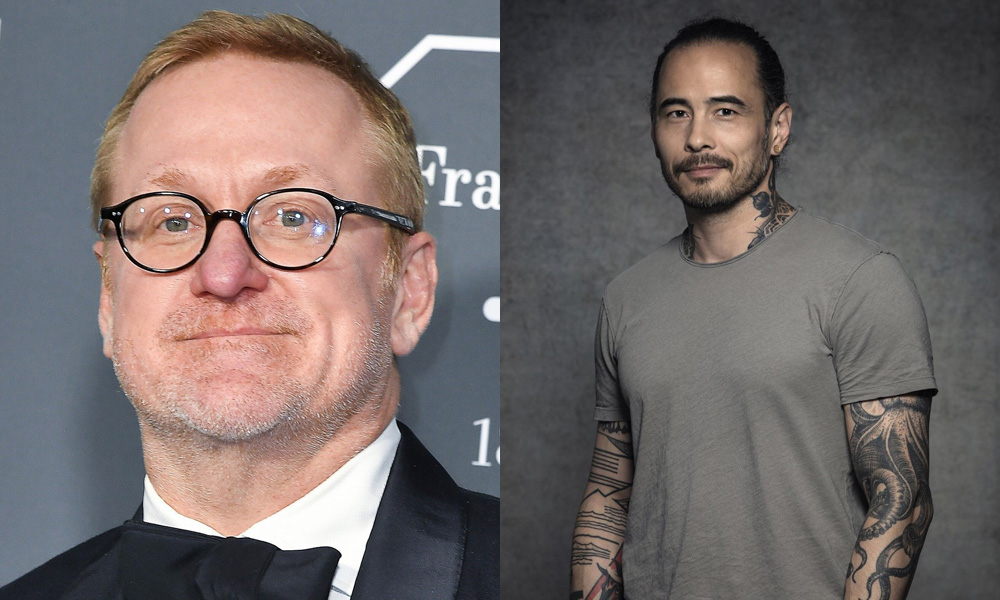 The decision to not only pull Thomas Edison out of his century but make him a Chinese woman might only seem counterintuitive if you have a hard time accepting that George Washington wore retractable chain saws on his wrists. It was, however, a personal matter to Callaham. “You might not get this from my name, but I’m Chinese American,” he says. “I fought, and was supported by my team, for there to be a Chinese American face on the screen as more than just a background character. Edison is one of the only characters that is pretty stand-up and correct in her behavior throughout the movie. I didn’t really want to associate any of the other characters in the movie with my identity.” (For the record, voice actress Olivia Munn is of Chinese Vietnamese heritage.) While on the subject of background characters, America: The Motion Picture boasts walk-ons by the likes of J.F.K., Teddy Roosevelt, Martin Luther King, Jr., Lucille Ball, Harriet Tubman — and even Channing Tatum from Magic Mike.

While most of the film has a graphic look that resembles cel animation, Toon Boom Harmony software was used by the artists. It was a shift for Floyd County, which had employed Adobe After Effects for previous seasons of Fox’s Archer. “We have changed to be a largely Harmony studio now,” says Thompson. “This is a mostly Harmony movie, and while we usually comp in After Effects, for the first time we comped in [Blackmagic] Fusion. That allowed us to do a little more of what I would call faked 3D to our comping.” Backgrounds were painted in Adobe Photoshop, and some of the characters were originally designed in Illustrator and then ported into Harmony. Thompson also credits Brian Fordney, the film’s tech director, with adding a few scripts to enhance the off-the-shelf software. Chris Appel served as the picture’s 3D animation director.

Even before the year-long animation process began, another year-and-a-half or so was spent storyboarding and developing the characters, to make sure there was a solid base on which to pile all the insanity. “We have so many crazy elements in this movie that it was important our story was still clean and had a through-line,” Thompson says. “We spent a lot of time making sure the story made sense and you really rooted for this ragtag bunch of characters who are going to fight this large army.”

All of the studio’s resources went into play for the climactic, all-stops-out battle between the revolutionaries and nearly-overwhelming forces of King James. “We did everything we could to make that battle big and amazing, and I think it really pays off,” Thompson says. “There is a ton of effects work in it. That scene was the last render of the movie and up until the last moment, we had to say, ‘Digital pencils down, we do not have any more time.’ It was by far the biggest challenge of the movie, and the biggest challenge I and my studio has ever made.”

Both Callaham and Thompson are quick to praise the participation of Netflix, which will release the America: The Motion Picture right before Independence Day. “My favorite kind of projects are those where I’m constantly looking over my shoulder and wondering whether someone’s going to pull the plug on what I’m doing,” Callaham says, adding: “Netflix never pulled the plug.”

“Netflix has been awesome to deal with,” echoes Thompson. “One of the great things about Netflix is worldwide release on the same day. I am looking forward to Americans and people all over the world sitting down on the Fourth of July and seeing this. I can’t wait for a person in Australia to go, ‘Well … that’s how America was formed!’ I look forward to confusing people all over the world.”

America: The Motion Picture premieres on Netflix worldwide on June 30.