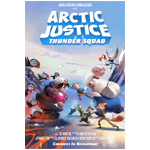 In Arctic Justice: Thunder Squad, when the sinister Doc Walrus (Cleese) hatches a secret plot to accelerate global warming and melt the arctic circle, a rag-tag group of inexperienced heroes (Franco, Baldwin, Huston, Klum, Sy) must come together to foil his evil plans.

AMBI Group principals Andrea Iervolino and Lady Monika Bacardi are producing the film through their Toronto-based studio AIC Movie Inc. The screenplay was co-written by Cal Brunker, who served as an animator on Despicable Me and Ice Age 4, and Bob Barlen (Escape from Planet Earth).

“There is a strong market demand for high quality animated family films and we have ambitions to be a major player in this space, starting with Arctic Justice,” says Lady Monika. “There is so much to love about this project – it’s a perfect story to be realized through CGI animation – and in 3D. This is a defining project for AMBI and we’re very excited to move forward with it.”