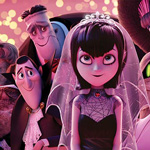 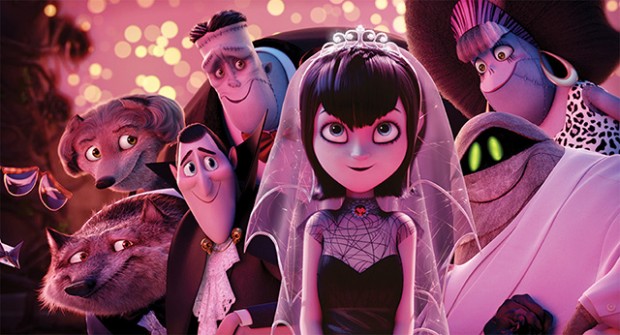 In animation, as in any art form, there are no hard and fast rules. Just ask the animation crew that worked on Hotel Transylvania 2 for director Genndy Tartakovsky.

“The rules change from shot to shot,” says Alan Hawkins, animation supervisor on the Sony Pictures Animation movie. “On other CG movies that I’ve worked on at other studios, it’s more about keeping things on model, keeping things consistent. But Genndy will do a pose that we’ve never seen before for a shot, or a shape that we’ve never done before on Drac just because he thought it was the funniest option. It’s sort of like the sky’s the limit in terms of that kind of thing.”

None of which should surprise fans of Tartakovsky’s work, which includes creating such iconic 2D animated TV series as Dexter’s Laboratory, Samurai Jack, Star Wars: Clone Wars and Sym-Bionic Titan. Having brought his style to CG animated features with the successful first Hotel Transylvania movie in 2012, Tartakovsky admits his cartoony style is challenging for CG animators to get used to.

“It’s kind of a difficult style to just jump into especially when everyone in the animation community is doing stuff that’s different,” says Tartakovsky. “To do the cartoony stuff, you need a certain sensibility and understanding, so that’s always the challenge.”

Opening in theaters Sept. 26, Hotel Transylvania 2 picks up with Dracula, voiced by Adam Sandler, hosting a wedding for his daughter Mavis (Selena Gomez) and her human beau Johnny (Andy Samberg), who soon have a son, Dennis. Drac’s worries about whether his grandson will be a vampire are amplified when Mavis goes to the human world with Johnny to meet his parents and Drac’s old-school father, Vlad (Mel Brooks), shows up at the hotel for an unexpected family visit. Also returning to provide voices for the sequel are Kevin James, Fran Drescher, Steve Buscemi, Molly Shannon, David Spade and Keegan-Michael Key.

With so large a cast of characters, it was a challenge to ensure the animation focused the audience’s attention on the characters and minimize the potential distraction offered by highly detailed CG-rendered environments.

“When you’ve got five people in a shot, you’ve got to make sure you know where your focus is and that you’re leading the eye of the audience to that,” says Tartakovsky. That was easy with the simpler images of 2D animation for television. “With CG, we’re finding more and more what we need to do,” he says. “For this movie, our colors are crisper; tonally, the movie is richer; and I think that helps make the reads be clear.”

Tartakovsky’s graphic style was easier to work with on this movie than the first because the animation tools had been updated to reflect the way he works. That allowed the individual animators to focus on their work to the point the director could tell who had animated which scene.

The director was extremely hands on with the movie, with daily review sessions running up to 90 minutes and covering about 50 but as many as 60 shots per session, Hawkins says. Tartakovsky gave notes primarily by drawing on top of them via a touchscreen monitor. The pipeline at Sony Pictures Animation was set up to incorporate those notes into the scene files so they went directly back to the animator.

“We have tools for basically tracing what he’s given us, which is such a huge part of the show,” says Hawkins. “We do our thing, but the movie looks the way it does because of Genndy. It’s all his style, and we’re just tourists.”

The animators would use the rig to get the tweaks as close as possible to Tartakovsky’s drawings and then used a new shape-blend tool that let them match it exactly. “That’s the majority of the workflow, really, is creating something a standard CG rig won’t give you,” he says. “It really forces the animators to diversify their skills quite a bit.”

But applying a 2D approach in 3D brings up some interesting conflicts, especially when stereoscopic 3D is involved. Eye-line issues in particular were tough, Tartakovsky says, because in 2D it’s no problem to do a profile character looking at a character in three-quarters profile, but in 3D it looks odd. “The 3D artist has to figure out a way to put them in the right space and create depth in a different way,” he says.

Among the technical advances made for the movie was the development of a new motion blur system that was dubbed “Genndy Blur” that worked with the director’s style. “The motion blur just does not like our style of animation because it’s so fast, and so it would literally just wipe drawings away,” he says. The new system “acts more like the way we draw and the way we think of motion blur in animation.”

Tartakovsky almost passed on the sequel, feeling after the first movie it was time to move on. “I started thinking about the characters and my intimate relationship with the animators and the animation style that we did and there was a lot of ownership in that for me,” he says. “And so I thought maybe I’ll give it another shot and do it.”

The idea of bringing in Drac’s father, Vlad, was another key selling point for the director. “It was really exciting because it was like: ‘Oh yeah! Dracula’s father, what could that be like, design wise?’ And, ‘Where does a character like Dracula come from?’ And that started to excite me.”

Much of the film’s humor and story comes from the idea that the monsters are accepted by the human world — tying perfectly into Drac’s concerns his grandson may not carry on the family tradition of being vampire.

“It’s harder and harder to become a monster in this new world where freaks are accepted, so to speak,” say Tartakovsky. That’s a point that also worked for Mavis, who is looking to be accepted by Johnny’s family when they both stand out.

Personality drove the design for Vlad, voiced by comedy legend Mel Brooks. “We know he’s going to be very curmudgeonly, he’s going to be old school, he’s imposing but also very old —and at the same time, he’s gotta be comedic,” says Tartakovsky. Lots of sketches led to a bit of a funny old man look that was refined by adding a touch of the F.W. Murnau’s original cinematic vampire classic. “We wanted to bring a little Nosferatu into it just because that’s the OG Dracula, or vampire, and so there’s little elements of it in the giant big ears.”

Hawkins says most of the characters from the first movie were well established, but the new ones quickly developed their own styles. Vlad, for example, is less exaggerated and more of a slow, controlled and monolithic character, Hawkins says. The Cronies, who are part of Vlad’s gang and the eventual main antagonists of the movie, are given a layer of simulated muscle and wings to give them more detail than the other characters in the movie.

“That was really tough to collaborate with because it’s done by another department and the nature of Genndy’s posing usually makes it very difficult for simulations and things like that to occur,” says Hawkins.

Additionally, the movie has a much larger character count than the first one with many more background variations and different costumes used. “The setup team and the modelers definitely had their hands full with that — and the animators too because the more characters you have the less you can focus on (each of) them.”

For the look of the movie, production designer Michael Kurinsky sought contrast between the monster world and the human world.

The production was quick, with animation starting in October 2014 and taking about 10 months to complete by a crew that grew to include at its high point 110 animators.

“We basically made the movie in under three years from first script to delivery,” says producer Michelle Murdocca. “We didn’t get down to script writing until September of 2012, so it was pretty tight schedule and the script that we got in November of 2012 is nothing like the movie that we’ll release.”

Though he’s a star in the animation world, most people who buy a ticket to Hotel Transylvania 2 are more likely to recognize Sandler, who voices Drac and is executive producer on the movie along with writer Robert Smigel. Tartakovsky says they brought a strong point of view to the project and all parties needed to reach a consensus on the best way to proceed.

“It’s a lot of trial and error,” says Tartakovsky. “They’re very set in what they do and sometimes it’s real successful and sometimes it’s not, and so we have to prove ourselves. If I come up with a joke and they go, ‘Eh, that’s okay,’ I go, ‘Well, let me board it and show it to you,’ because once you see it, it becomes something else.”

“We’re basically partners with them,” says Murdocca. “They’re writers and we partner with them to collaborate on all the right ideas and make sure we’re going int he best direction for the movie.”

With the movie almost completed, Tartakovsky says he’s anxious to finish it and move on to his next project, an original feature idea titled Can You Imagine?, at least in part because he feels pressure to make the movies he wants to make while he can.

“I remember when (Hayao) Miyazaki retired, he had only made 11 movies,” say Tartakovsky. “The 11 are amazing, but when you think of it like, ‘I only have so many left,’ you start to panic. If I’ve got 10 movies left, you want to make sure you get them made.”