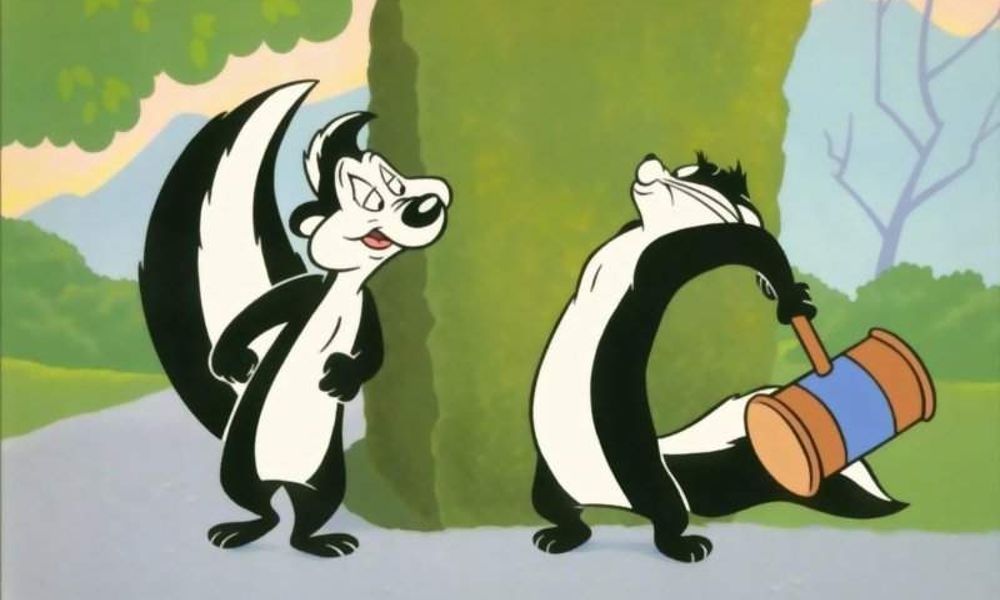 In the wake of the Twitter storm stirred by New York Times columnist Charles M. Blow’s assertion that the classic cartoon character “added to rape culture,” Deadline reported that a scene featuring Pepé Le Pew had been cut from the upcoming hybrid flick Space Jam: A New Legacy (due out July 16). The Looney Tunes/Merrie Melodies character, introduced in 1945, appeared in the original 1996 Space Jam voiced by Maurice LaMarche.

The scene in question was shot (but not yet animated) by the sequel’s first director, Terence Nash, who was replaced in 2019 by Malcolm D. Lee (Girl’s Trip). Deadline‘s sources said that the scene was a black-and-white spoof on Casablanca, with Pepé as a bartender and Greice Santo (Jane the Virgin) as a customer. The stinker begins kissing Santo’s arm, to which she pulls back, slams Pepé onto a stool, pours her drink on him, and slaps him into a spin across the room to be stopped by star LeBron James. James and Bugs Bunny get information on Lola’s whereabouts from the skunk, who then tells our heroes that Penelope has filed a restraining order against him. James tells Pepé he can’t grab other Tunes without consent.

Santo, who has spoken out about being sexually harassed and heads a non-profit for victims of domestic violence (Glam with Greice), was upset that Lee chose to cut the scene. A spokesperson for the actress-singer told the site, “This was such a big deal for Greice to be in this movie. Even though Pepé is a cartoon character, if anyone was going to slap a sexual harasser like him, Greice wished it would be her. Now the scene is cut, and she doesn’t have that power to influence the world through younger generations who’ll be watching Space Jam 2, to let younger girls and younger boys know that Pepé’s behavior is unacceptable.”

Linda Jones, daughter of Chuck Jones, told EW.com that her father was a compassionate liberal man who originally made the Pepé cartoons for an adult audience getting ready to watch their movie at the theater on the weekend back in the ’30s and ’40s.  She pointed out, “There’s a difference between the decision to identify these cartoons as not being appropriate now, and that they contributed to the rape culture then.” She said she has no problem with Pepé being cut from the Space Jam movie, and that she’s an advocate of being sensitive to these kinds of issues seeing as she’s been through a lot herself working her way up as an executive of her own company. “The essence of the character might be carried into something that’s more acceptable now,” she said.

Whereas Looney Tunes Cartoons rehabbed Elmer Fudd by taking away his hunting rifle in light of the country’s gun violence issues, WarnerMedia appears to be putting Le Pew and his inappropriate behavior played to outdated laughs out to pasture. The character has had a cameo in one Looney Tunes Cartoons short (among dozens of other Tunes), but Deadline‘s sources noted that upcoming Warner Bros. Animation projects based on Looney Tunes/Merrie Melodies like Bugs Bunny Builders and Tiny Toons Looniverity (both set to join Looney Tunes Cartoons on HBO Max) have no plans to include the mephitidae menace.

First introduced in Chuck Jones’s Odor-able Kitty (as “Henri”), Pepé’s schtick of being an addled, French-accented Lothario chasing anything with a white stripe (usually Penelope Pussycat) and refusing to take “No” (or blows to the head) as an answer carried him through 18 shorts (mostly directed by Jones), including the Oscar-winning For Scent-imental Reasons. He has had over a dozen voice actors, beginning with Mel Blanc and most recently Eric Bauza in New Looney Tunes and Looney Tunes Cartoons.

Writer Blow is not the first critic to point out how problematic the character has become in a more understanding age. Comedian Dave Chappelle famously had a bit on Pepé Le Pew in his 2000 stand-up special Killin’ Them Softly, saying: “Good God, what kind of f—ing rapist is this guy?” Back in 2016, a big Comic-Con announcement revealed that Max Landis was penning Le Pew’s first feature film for Warner Bros. … the writer was himself accused of sexual assault the following year.