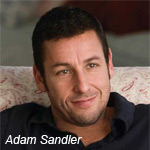 Adam Sandler and his Happy Madison production company will be working on feature version of the hybrid animated-live-action short Bad Toys II. According to The Hollywood Reporter, the French directors behind the short Daniel Brunet and Nicolas Douste, will co-exec produce the movie.

The Columbia feature focuses on a grown man who reconnects with his boyhood imagination when he begin to play with his son’s toys, imagining them in an action-packed Michael Bay-type of a movie. The original short combined live-action, comic-book panels and CG animation.