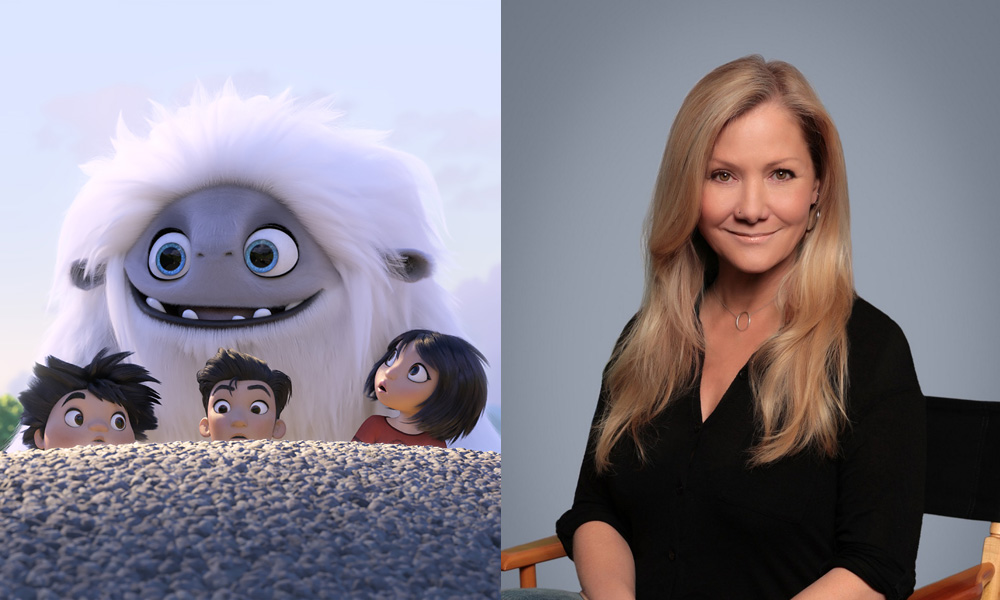 Written and directed by animation veteran Jill Culton, the new DreamWorks/Pearl Studio collaboration Abominable tells the story of a teenage girl named Yi (voiced by Chloe Bennet) who forms a powerful friendship with a mysterious creature she encounters in her city.

While we have seen several animated movies about the abominable monster in recent years, this beautiful, emotional take is quite unlike any of the past incarnations of yeti on the big screen.

Helping the yeti — dubbed Everest — escape the city and head for home in the Himalayas, also pulls into the adventure Yi’s cousins: sophisticated and seemingly vain teen Jin (Tenzing Norgay Trainor) and younger, rough-and-tumble Peng (Albert Tsai). Their journey takes them across China, visiting some of the nation’s most iconic natural sights on the way to a showdown at the base of Mount Everest itself.

Culton, who is best known for working on Pixar movies such as Toy Story 1 and 2, A Bug’s Life and Monsters, Inc. and directing Sony’s hit Open Season, says the project got started about seven years ago when DreamWorks asked her to work on a yeti movie: “It was kind of a blank slate, which is kind of a director’s dream,” she says. 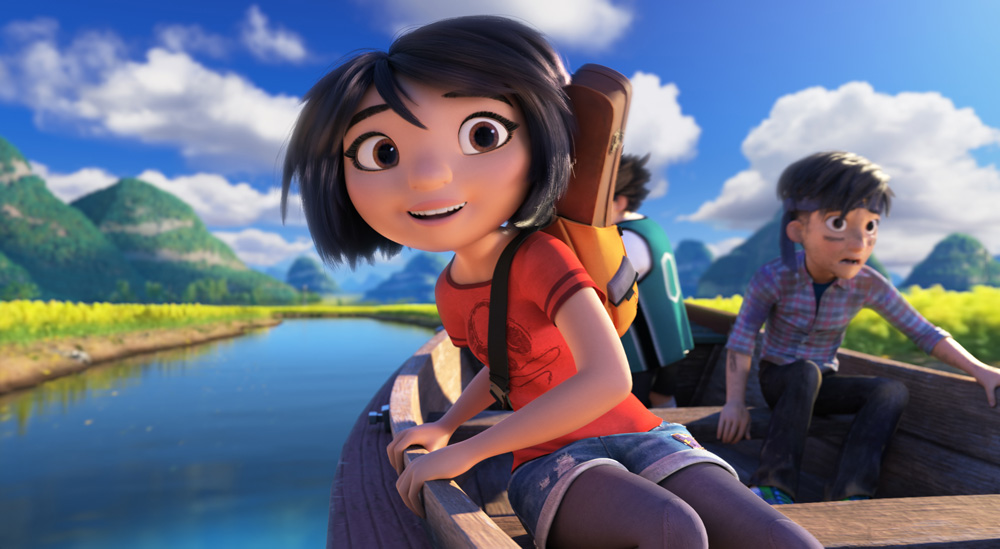 She drew on her love of big dogs as an inspiration for Everest, as well as her own experiences in creating Yi and her story. “I was a tomboy and grew up in Ventura, California surfing, skateboarding, camping,” she says. “So, this was an opportunity to create a stronger lead female who’s more of a tomboy, who’s not afraid to get dirty you know leaps before she looks which sometimes gets her into trouble.”

The movie also offered the chance to introduce elements well-suited to animation, with Everest bringing in aspects of magic and music as major theme that allowed Culton’s story to evoke and heighten nature, and bring in strong visual elements without making the movie “too chatty,” she says.

A Creature in Development

Development was a long process, punctuated by major changes at DreamWorks, including the departure of founder Jeffrey Katzenburg, its acquisition by Universal and several subsequent management changes. Culton says she was off the movie for a while, then came back and worked under a tight deadline of 18 months for production to get Abominable ready for worldwide release in September.

The film was a co-production with Pearl Studio, which was founded as Oriental DreamWorks before being spun off on its own. Pearl had a particularly strong voice with anything involved with the cultural elements of the film, especially the theme of family, says Peilin Chou, producer on the film and chief creative officer of Pearl Studio. “Since it was set in China, [our team helped with] everything from making sure the characters talk or look or move like authentic Chinese teens as well as the family dynamics: the personality of the grandmother, the way Yi interacts with the family, what’s on the table at a typical Chinese dinner.” 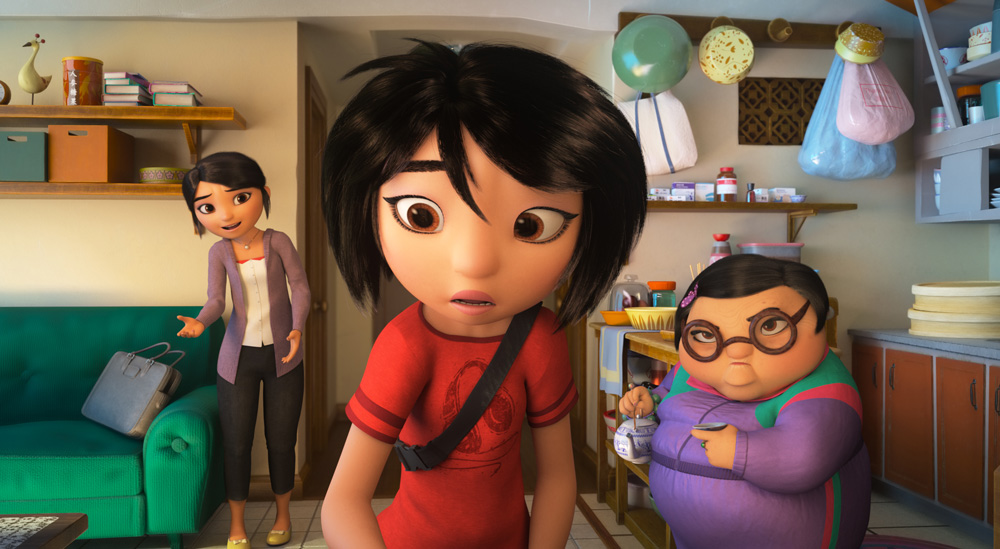 Among Pearl’s contributions was a team of artists that was instrumental in ensuring accuracy in the movie’s depiction of China in everything from the look of garbage cans on the street to the character of Yi’s grandma, called Nai-Nai, who struck a chord with filmmakers on both sides of the Pacific.

“They all had an opinion on Nai-Nai,” says co-director Todd Wilderman. “And to get that right was a really important thing for us, and I think we did, because they got to the final version of her and everybody was just cracking up at her. They could see their grandma in her.”

That universality also was evident in the way the three lead characters developed and were received in previews, says producer Suzanne Buirgy. College-age Jin is portrayed as very conscious about his looks, his future prospects and his social status — especially with the cute neighborhood girls. Peng is at first mostly interested in getting his cousins to play basketball with him, but evolves into a kind of jester character who can say the things the others are thinking. 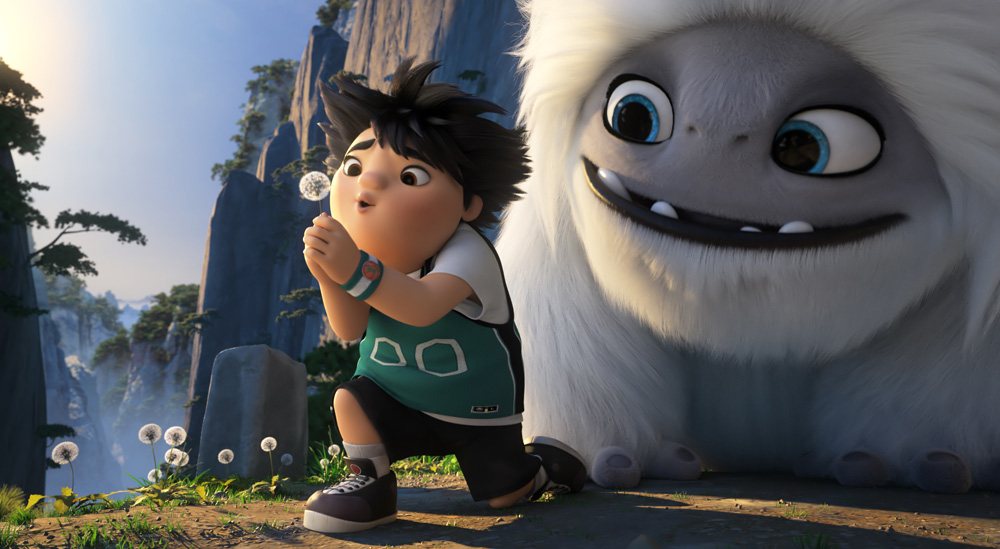 An emphasis on creating universal humanity extended to the villains, with elderly Mr. Burnish (Eddie Izzard) established as having seen a yeti in his youth and being on a crusade to capture one to prove to the world he didn’t imagine it. His colleague, Doctor Zara (Sarah Paulson), is at first the voice of reason, trying to help Everest while still serving Burnish, but there is definitely more to each character.

Everest’s look was designed to be unpredictable, covering him in a thick coat of fluffiness that made it difficult if not impossible to tell which side of him was up, says Wilderman. Much of the effect came from DreamWorks’ proprietary renderer MoonRay, which helped give Everest’s fur a touchable quality. 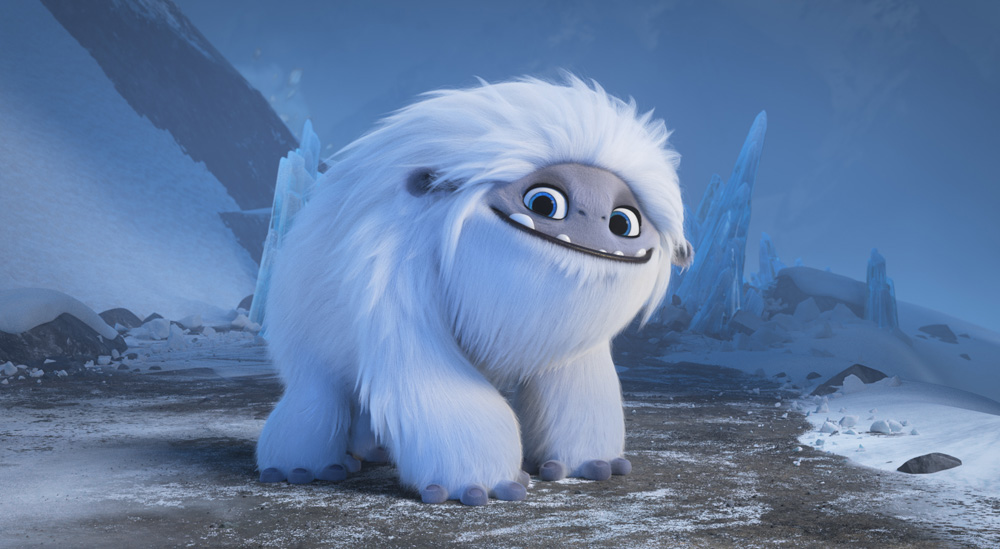 But the most important thing for Culton was that Everest not speak, that he reveal his depths of understanding visually. “As the film goes on, you realize, ‘Oh, he’s not just a wounded animal,’” she says. ”He has a personality. And then you realize that he has these magical powers. Then you realize he’s got even more of a spiritual quality.”

Music plays a large role in the film and is the most significant way Yi and Everest communicate — Yi through playing her father’s violin and Everest through a humming noise that accesses his magical powers. That had to be figured out early enough to animate characters to, so composer Rupert Gregson-Williams came on the project earlier than usual for a composer and, in exploring how Everest would sound, ended up performing the Yeti’s “voice” in the movie.

Getting the movie done and maintaining high quality in the relatively short 18-month production schedule was made possible by the crew being completely on board with Culton’s vision for the film, says Buirgy. “You know, they were sitting there trying to figure stuff out on their own just because they were so so excited about the film,” she recalls.

”When we have less time, there’s less time to get lost,” says Ennio Torresan, head of story on the movie “We married to the story, we knew where it was going, we knew what the end would be and it was a very clear path. So, it was mostly how can we make it as fantastic as we can in the time that we have.” 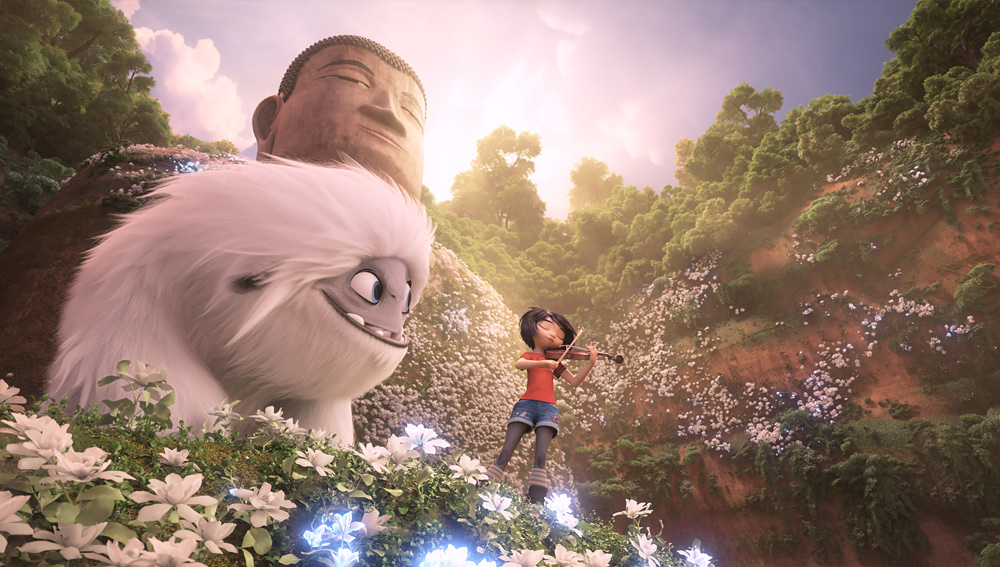 Additionally, the major tentpole sequences were set early on, allowing work to begin on those labor-intensive sequences while making room for further refinements and writing on the scenes that connect those moments.

Establishing the crucial moments also helped with pacing. Culton says that, as in most travel movies, she began by knowing where the story started and where it ended, leaving the middle more flexible. She says she wanted to start the pacing more slowly and allow the relationship between Yi and Everest to develop at a natural pace, picking up as the movie progresses. The movie was edited more like a live-action film, and is comprised of 41 sequences, compared to 26 to 30 sequences for most movies.

“There’s a lot of cutbacks when they get split up and separated, where you’re checking in on everyone, and I think that pacing also makes the film just race,” she says. “And then when we get to act three it is exciting, but grounded and powerful, and I think that makes for a really satisfying end.”

The look of the yeti magic was derived from natural phenomena, says production designer Max Boas.

”Visually, we tried thinking about the very end and what the climax was going to be, and bringing in the Northern lights, the aurora borealis, and being inspired by the vertical ribbon shapes,” he says. 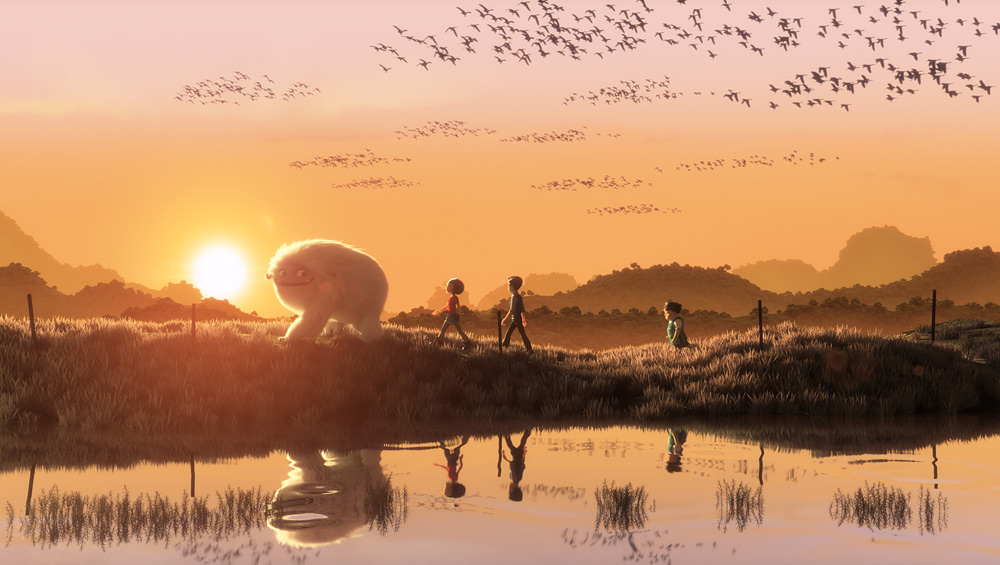 Pearl Studio will distribute Abominable in China, circumventing the nation’s restrictions on foreign film imports, in a Mandarin adaptation that should benefit from opening just prior to a weeklong national holiday. (The English version also will screen in China.) Buirgy says the Mandarin version features well-known Chinese voices and tweaked dialog to ensure the humor and story play properly. It also will feature a newly recorded Chinese version of Coldplay’s “Fix You.” The song plays a key role in the film, but using the original Chris Martin vocals and music proved jarring to Chinese audiences in preview showings, says Culton.

With the journey nearly complete, Culton says she is excited to release the finished movie and see what people think of it.

”The goals were to make it musical, whimsical, have a lot of heart and a lot of humor,” says Culton. “It was also the goal to make these kids feel real and discuss real things, even in their heart, and for audiences to go away transformed. Why wouldn’t we want anything less than that?”

Universal will release DreamWorks/Pearl’s Abominable in U.S. theaters on September 27. 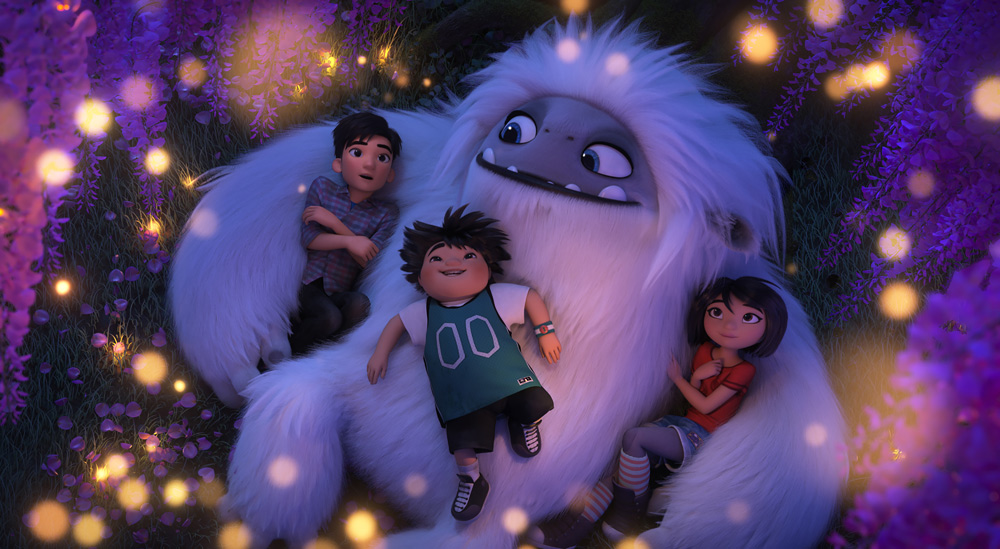