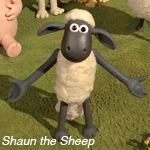 The BBC is reporting that Aardman Animations has begun work on a feature film version of its preschool animated hit Shaun the Sheep.

The Beeb reports that a script is being developed for a film that would be released in 2013 or 2014.

Shaun the Sheep first appeared in Aardman’s 1995 Wallace & Gromit short film A Close Shave. His own show began airing in 2007 on the BBC and has since spawned a spinoff series called Timmy Time.

The series, in which characters do not speak any dialog, was inspired by 1920s silent film star Buster Keaton, according to Aardman creative director Richard Goleszowski.

You may also like...
Related Topics:Aardman, Shaun the Sheep, Timmy Time