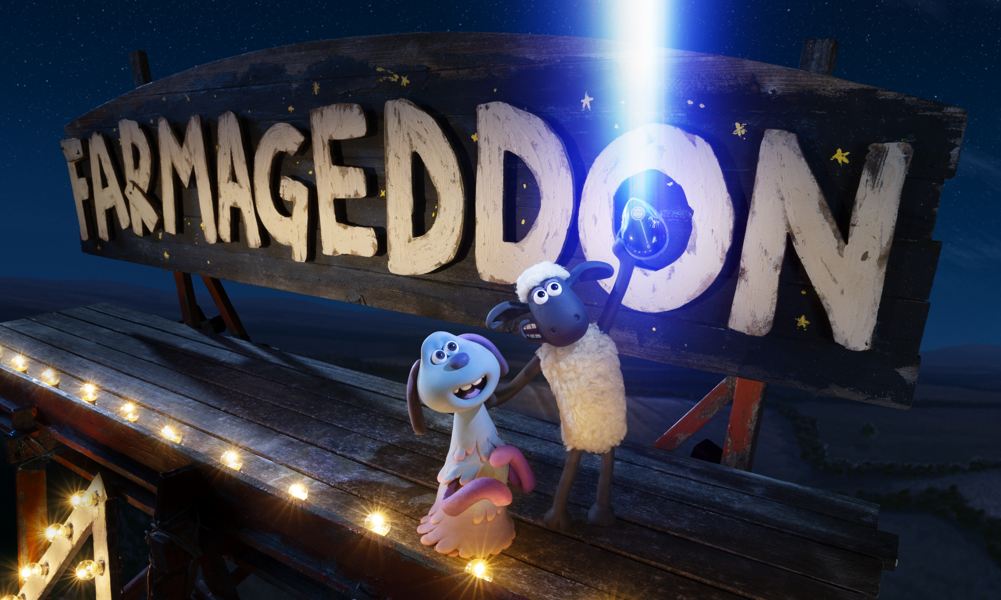 British stop-motion studio Aardman Animations is bringing cinema’s best-known ovine baa-ck with an out-of-this world new adventure in A Shaun the Sheep Movie: Farmageddon. In the making for over four years – the Aardman team began developing the sequel before they’d even finished its predecessor, Shaun the Sheep Movie – the latest installment of the franchise sees our woolly-headed hero boldly go where no sheep has gone before. In the process, he learns a valuable lesson about responsibility thanks to a brand new character, Lu-La, a young (and adorable) alien with glittery, floppy ears, strange powers and a taste for sugar, who crash-lands near Shaun’s farm. 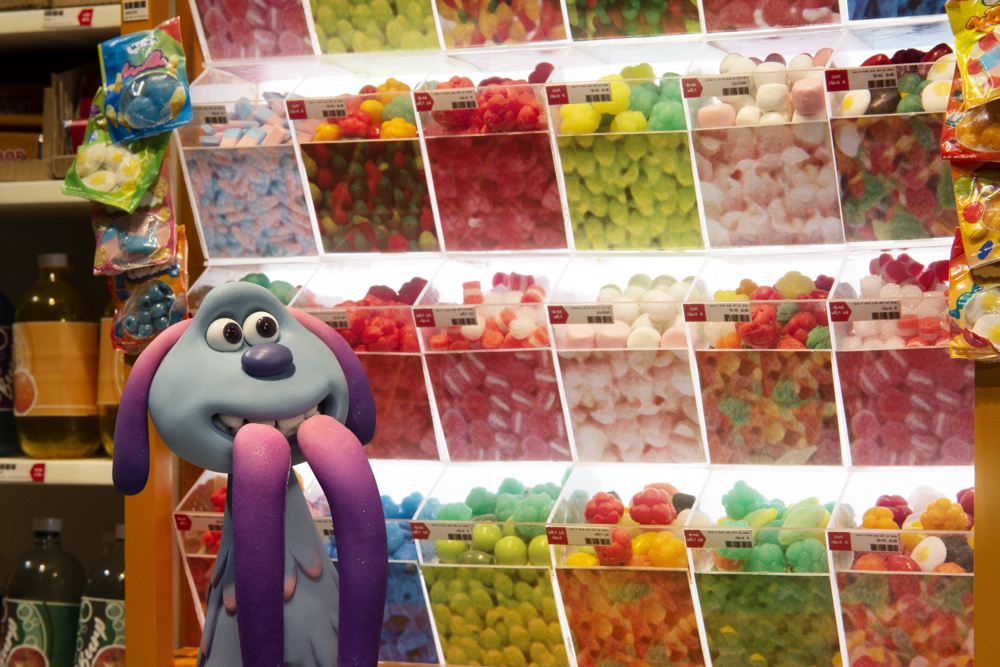 “We struggled with lots of different types of story until we kind of landed on the one we have,” explains Paul Kewley, a producer on both Shaun movies. “Funnily enough, [a story] often comes about because you start talking about something personal, and we actually ended up talking a lot about being an elder brother.”

In Farmageddon, Shaun is depicted as the capricious middle child, while sheep dog Bitzer is the authoritative older brother figure who is left to clean up the mess. It’s a paradigm that many of the creators identified with.

Kewley says the team had been itching to do a space movie for some time. “I’d pitched a number of sci-fi ideas at Aardman over the years after joining [10 years ago],” he says. Somewhat counter-intuitively, it was the pastoral environs of Shaun’s home at Mossy Bottom that eventually provided the opportunity for a close encounter of the third kind. “The farm environment and alien movies kind of belong together,” Kewley points out. Richard Phelan, who directed the film alongside Will Becher, was equally enamored with the idea of taking Shaun to space. “[We thought] we could bring an alien to the farm and it just sort of snowballed from there because we’re all such big sci-fi fans.”

The concept also meant there’d be plenty of opportunities to both pay homage to and, in typical Aardman fashion, gently spoof some of their favorite sci-fi films and television shows, with inspiration taken from H.G. Wells, Steven Spielberg, James Cameron, Robert Zemeckis and Stanley Kubrick, among others. In one scene, a piece of burnt toast looks like the Monolith from 2001: A Space Odyssey; in another, the stains from a pizza box resemble the inkblot-like language in 2016 movie Arrival. “We’re just trying to find out the goofiest way of doing these things,” says Becher. “There’s lots of nods and winks.”

It wasn’t all fun and games, however. Lu-La’s presence at Mossy Bottom proved nearly as much of a trial for the crew as for Shaun, it turned out. “Adding the new character of Lu-La to such an established universe was a real challenge,” admits Phelan. “We need[ed] to bring someone who is Shaun’s equal so audiences will fall in love with her and see why Shaun likes her so much, and hopefully care about her as well.” 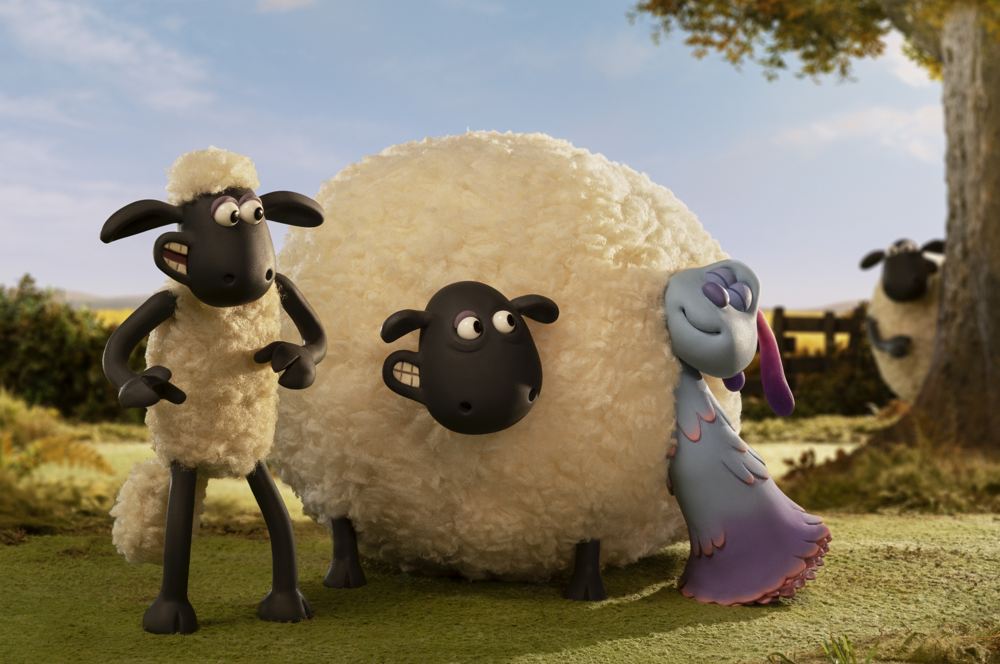 The design team were given a blue sky brief when it came to sketching out initial ideas for the alien, and she quickly took shape as a simple, almost 1950s style cone body with a large, cutesy head, which suited both her childlike character and her co-star’s already-established world. “Shaun is such a classic silhouette that he needs to be able to stand next to her,” Phelan explains. “We honed in on trying to make her look incredibly simplistic and then, as the film goes on, you find out she’s got all these powers.”

To give Lu-La a more extra-terrestrial vibe, they asked concept artist Aurélien Predal, who also designed the farm, to create an alien world that was “almost like a tropical fish, like bioluminescent,” says Phelan. “He did this almost UV planet and then he did these different color palette tests of Lu-La next to Shaun. And the softer blue and pink, it just really popped.” The problem, however, was that the shade of blue they wanted for Lu-La wouldn’t work against the greenscreens, which meant fiddling with the tone until they found one that suited both purposes. “The puppet is almost like a baby blue but then on camera sometimes it looks almost purple. It’s very technical,” says Becher. “There were many, many tests to get it to work.” For a final, celestial touch, the team added glitter nail polish to her ears. 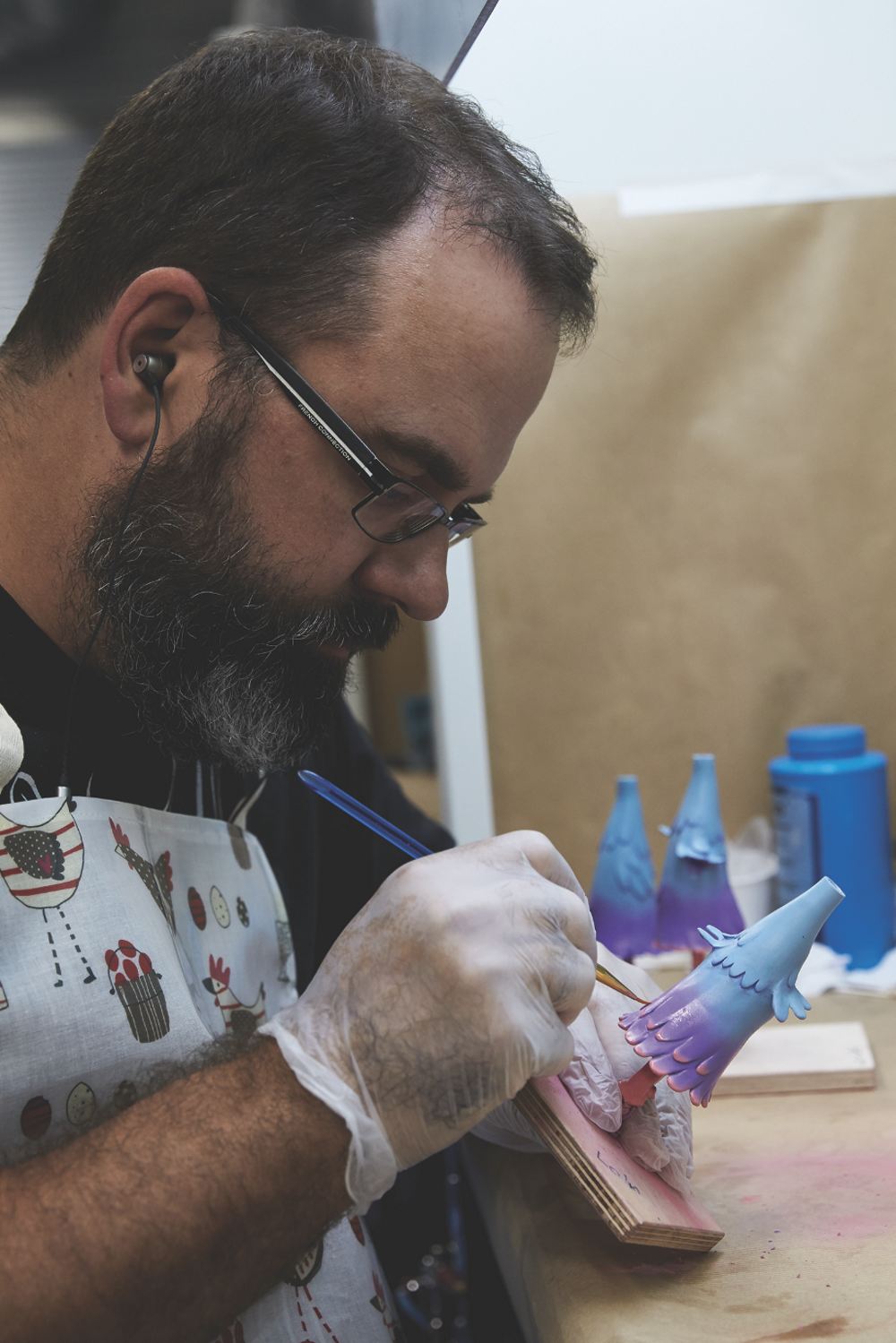 Like most characters in the Aardman cinematic universe, the Lu-La maquette boasts a plasticine face atop a wire armature covered by silicon. Without a traditional body, however, the crew initially struggled to work out how she would walk. “Just kind of figuring out who she was and where she came from, how she moved,” animator Carmen Bromfield Mason says of the challenges Lu-La presented. In addition to live-action video references, the team also made a life-size (4 ft.) Lu-La maquette. “We ended up using that sometimes to just try and get a sense of how fast she could move, because we wanted her to be quite free of a body,” Becher explains. That concept was taken to its limit in one mind-bending scene where she gets hopped up on sugar: the animators swapped the silicon for plasticine “so she can squash and stretch,” says Phelan. “It was a real blast to push her as far as she could possibly go.”

Both Phelan and Becher are full of praise for how far their animators – who numbered around 30, including the assistants – honed their craft during production. “There’s a scene, for example, where Shaun’s very emotional, it looks like he’s actually breathing,” recalls Becher. “The animators have just come so much further since the first film that they’re using all their abilities and rigs and stuff to make the characters feel more alive.” With the aim of producing 24 frames per second and 1.6 to 2 seconds of footage a day, it was, as always, a painstaking shoot, made that much more tricky by fast-paced space scenes. “On this film, we were more ambitious in terms of the set pieces, so we had quite a lot of camera moves and quite a lot of really complicated setups,” says Becher. “So it actually involved [the animators] working on more singles” (in which every single frame requires the puppets to move rather than every other frame). 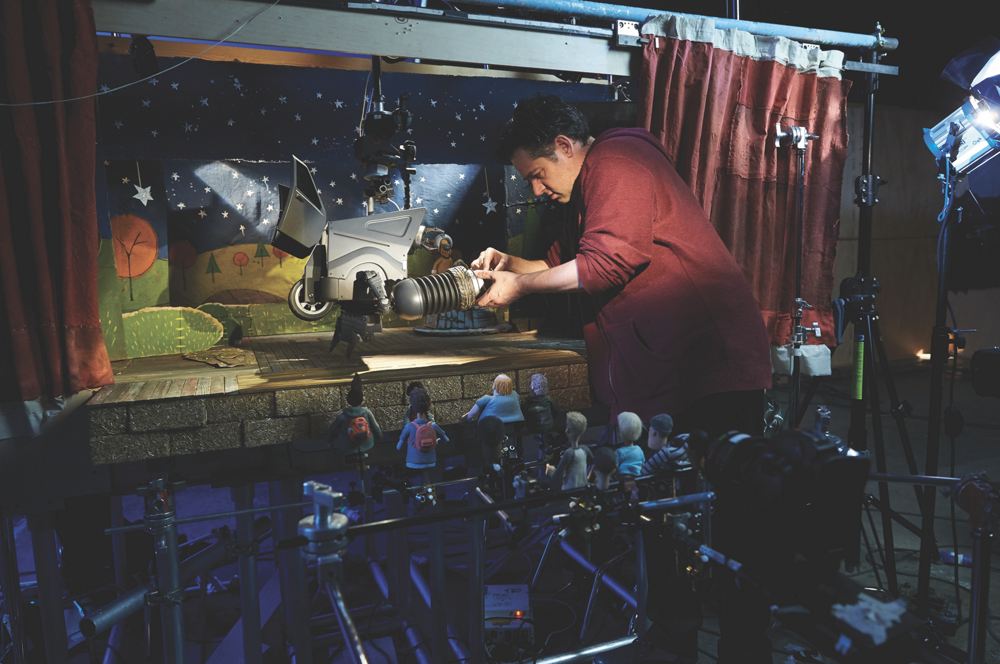 For Bromfield Mason, one of the most challenging sequences was in fact a lingering shot in which Shaun’s eyes fill with tears as he waves goodbye to Lu-La for the last time. “I had to figure out how I was going to go from Shaun waving happily to realizing that he’ll probably never see her again,” Bromfield Mason recalls. “You don’t really want to go too big with emotional sequences because it could end up looking a little bit pantomime-y, so it’s all about the really, really small things – like a slight eye dart or the ears curving down slightly – to get that sense of sorrow.”

Aardman artists use a variety of substances – including jelly, glycerin and Vaseline – to create tears, although each solution has different properties. “It depends how long your shot’s going to take,” Bromfield Mason explains. “You need something that’s going to hold its shape really well because you don’t want to go for lunch, come back, and then find that one frame to another it’s just gone or evaporated or slid down the face.” After concocting just the right blend of substances, the animator proceeded to apply it onto Shaun’s eyes with a pin as they fill, drop by drop and shot by shot, with tears. “It’s that delicate,” she says. The entire sequence took Bromfield Mason two full days to shoot. 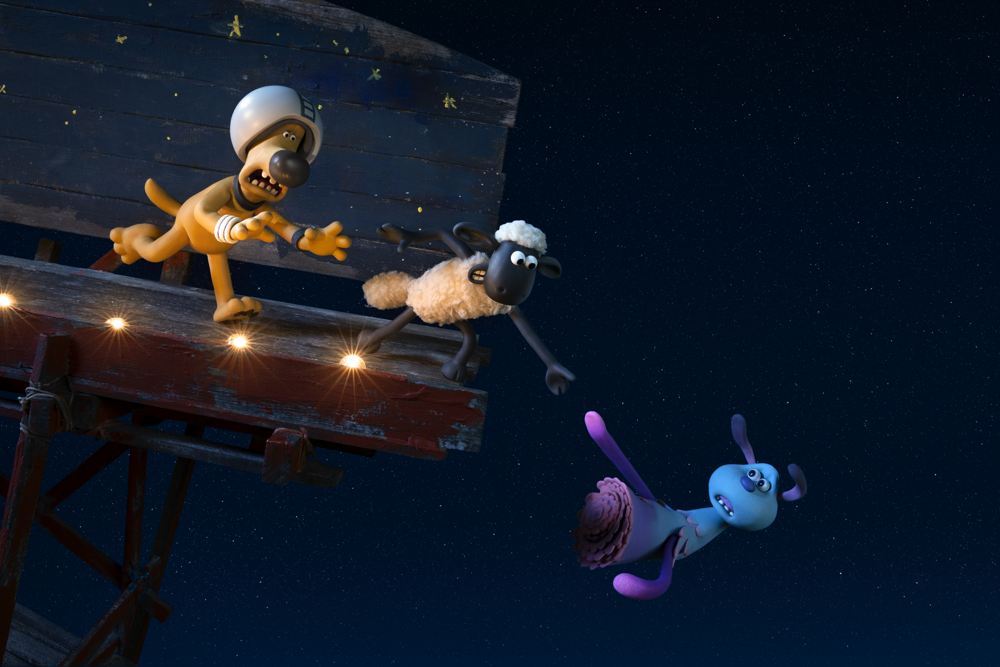 Equally tricky, she says, was positioning the puppets amid the cameras and lights in the tight interior of the spaceship, which was roughly the width of a laptop. “You need to be really, really slow,” she says. “If you drop something, like a mouth or an eyelid, that’s gone. There’s so much rigging underneath you can’t get it.” At the same time, Farmageddon also boasts some of the biggest sets Aardman has ever done, such as the International Space Station. Some were so big, in fact, they would have gone past the roof, and so had to be set on their sides. “They tipped the cameras up sideways to shoot them and it was a real brain-melter for the crew,” says Phelan. “Everything had to be built sideways, but then we’d flip all the monitors so the animators can see what they’re doing.” 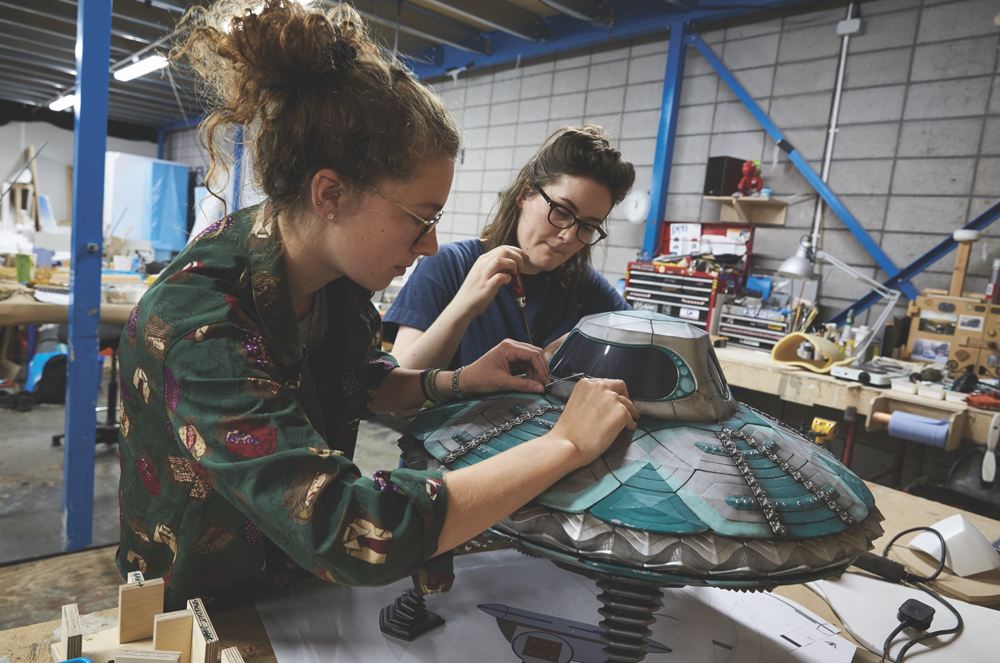 Although they don’t know the exact size of the sets, they said the studio space used for Farmageddon exceeded even that of Aardman’s last feature, Early Man, which took up the equivalent of four Olympic-sized pools. “And Rich and I are basically walking around that all day,” says Becher. “So I think we figured we did about seven kilometers (4.4 miles) each a day, quite easily.” The budget, meanwhile, was roughly the same as for Shaun the Sheep Movie, adjusted only for inflation. 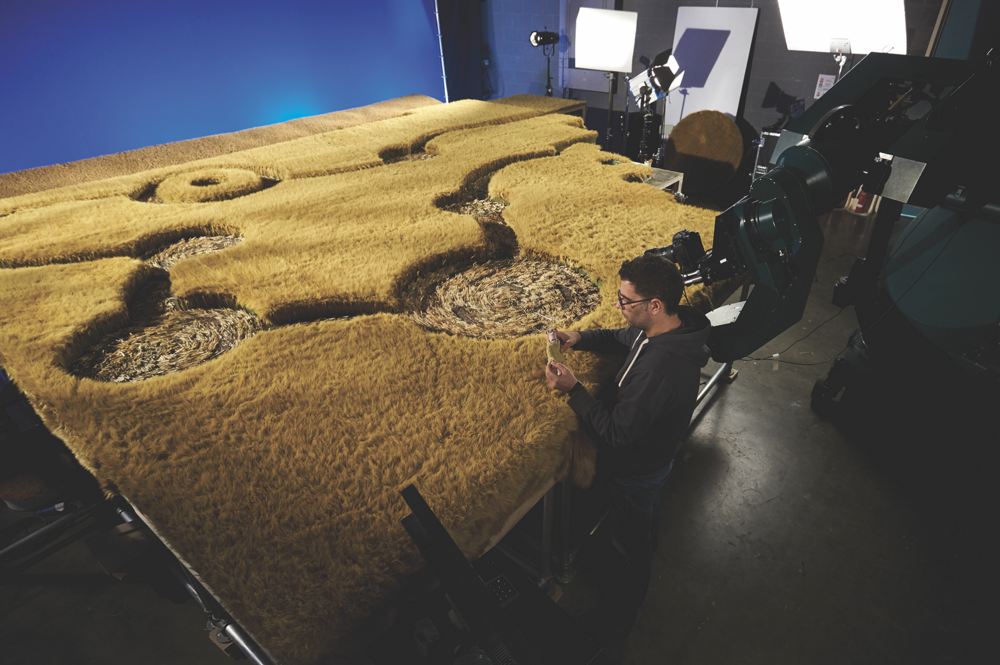 Shaun has now been a familiar face at Aardman for more years than some of its staff (“He long predates me,” laughs Kewley), which can make working on his films an intimidating prospect, particularly with creators Nick Park and Richard Starzak (who devised the first Shaun the Sheep series) still in the building. “Because we’re first-time directors — we know the world very well — [but] we were obviously following on from some of the best animation filmmakers at Aardman,” says Becher. “And actually, it was a massive joy to be given the responsibility, because that was a huge task for us to try and outdo the first film or try and make it feel different.”

“I think what everybody enjoys is that process of telling great stories, making great films, engaging the audience,” Kewley agrees. “So nobody’s precious about [the characters] in those terms and everybody loves the characters as well, so it’s fun. It’s a little daunting at times when Nick walks into the room or Richard walks into the room and you think, ‘I hope we’ve done the right thing with their characters,’ but they’re always massively supportive. And Shaun’s just a brilliant character, isn’t he?”

A Shaun the Sheep Movie: Farmageddon premiers on Netflix on February 14 (U.S. and Latin America). The movie is nominated for a BAFTA award for Best Animated Feature, and has already made over $37.7 million internationally. 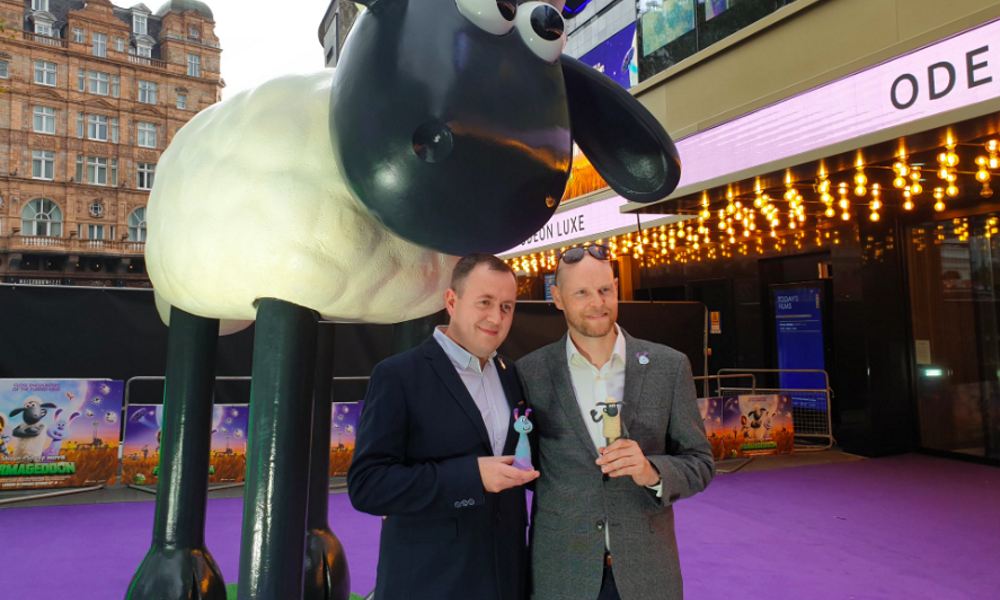 Directors Richard Phelan and Will Becher