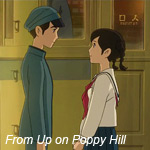 Goro Miyazaki’s delicate, coming-of-age movie From Up on Poppy Hill offers a welcome respite from the loud, CG world of most American movies.

Goro Miyazaki’s gentle new film, From Up on Poppy Hill (Kokuriko-Zaka Kara), was the top-earning animated feature in Japan in 2011, grossing almost $54 million and outdrawing two Pokémon features. It also won the Japan Academy Prize for Best Animated Feature, and U.S. audiences will finally be able to enjoy it on the big screen in the next few months.

Set in early 1960s Japan, Poppy Hill is more intimate than Miyazaki’s directoral debut, Gedo Senki or Tales From Earthsea (2006). Every morning before leaving for school, the industrious Umi Matsuzaki (voiced by Sarah Bolger) flies signal flags in the yard of her seaside home in Yokohama in honor of her father, who was lost at sea during the Korean War. When she meets Shun Kazama (Anton Yelchin), the editor of their high school newspaper, she gets involved in the efforts to preserve “the Latin Quarter:” Plans are afoot to demolish the beloved but dilapidated building that houses the school clubs. A believably awkward romance quickly develops between these likable teenagers.

Although Tales From Earthsea was the biggest hit of the 2006 summer in Japan, earning more than 7.3 billion yen (about $61.4 million), it received a cool reception in America. Fans of Ursula K. LeGuin complained about the liberties the fledgling director had taken with her much-loved Earthsea novels. Poppy Hill is a more assured film; its warmth and charm recall Yoshifumi Kondo’s Studio Ghibli feature Whisper of the Heart (1995). After an Oscar-qualifying run, indie distributor GKIDS will release the film next March in the United States, where it should find a receptive audience, as it did in Europe. 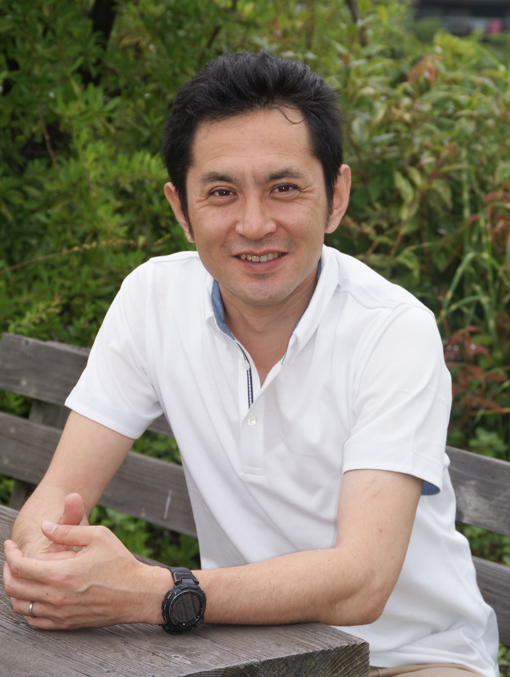 Miyazaki talked about his new film in a recent interview conducted via e-mail, with help from translator Anna J. Takayama. In contrast to the dragon-haunted fantasy realm of Earthsea, Poppy Hill unfolds in everyday reality, which posed challenges for Miyazaki.

“I found it difficult to make a film that was set in an existing period and place,” he recalls. “When I questioned how I could show the reality of this story, I thought about creating an animated film with a live-action film in mind. However, focusing solely on realism rendered the film chatty. I found it difficult to find a balance, and make the film without losing the sense of freedom and fun that is inherent in animation. I now feel that it’s more my style to make a relatable film with care than to create a large-scale work.”

From Up on Poppy Hill takes place during preparations for the 1964 Tokyo Olympics, an event that proclaimed Japan’s re-emergence after the destruction of WWII and the period of rebuilding that followed. Kyu Sakamoto’s cross-over pop hit “Ue o muite aruko,” known in the U.S. as “Sukiyaki,” plays in the background. Although nostalgia for the era is almost palpable, Miyazaki wasn’t born until 1967. 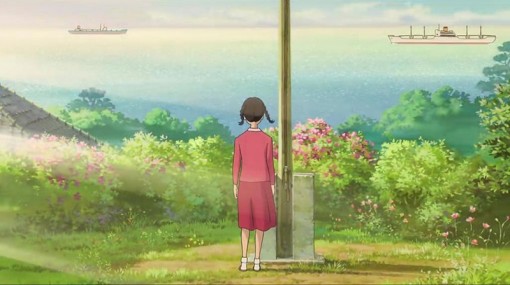 “For Japanese people, the brief period between the late 1950s and the early ’60s was an interval between a war overflowing with blood, and an opulent economic era overflowing with money,” he explains. “Although there were many social problems, people felt that it was a time of relative peace and calm. Not only I, but many Japanese feel a kind of nostalgia for this period.”

The script for Poppy Hill was adapted by Hayao Miyazaki and Keiko Niwa from a graphic novel illustrated by Chizuru Takahashi and written by Tetsurō Sayama.

“I did not have an opportunity to work with the creators of the graphic novel,” Goro says. “Hayao Miyazaki wrote the adaptation and I made the creative decisions as director. However, I read the original work when I was young and really liked it, so I wanted to make sure that I honored it.” 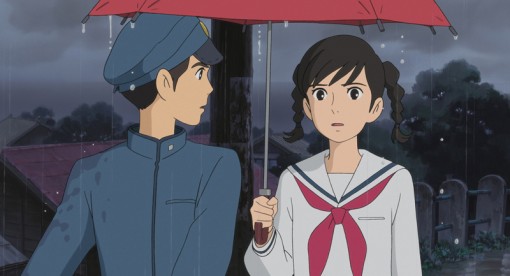 Unlike many recent American animated features, From Up on Poppy Hill  doesn’t talk to the audience to death. The filmmakers often rely on Satoshi Takebe’s subtle jazz score and the strength of the animation to carry the story. Miyazaki praises his collaborators:

“Koji Kasamatsu, the sound designer, and Satoshi Takebe, who did the music, both did a tremendous job answering my objective to express the characters’ feelings not with dialogue, but with creative direction and acting. I can say the same about the work’s sense of period and atmosphere. Without those two, the film would give a very different impression.”

“I think it is best to show a situation or a character’s inner feelings without the use of dialogue,” Miyzaki continues. “I think animated films and live action share this in common. I believe that a film is richer when expressing a character’s feelings in scenes without dialogue. However, it demands a lot of capability on the creators’ part, so it is takes courage.” 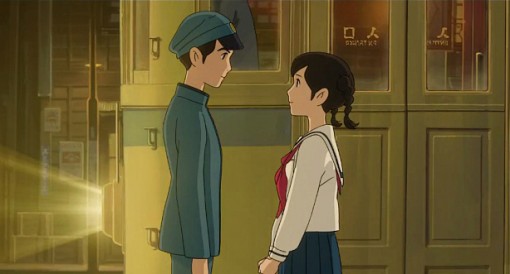 Another challenge—which Miyazaki clearly enjoyed—was creating the Latin Quarter, with its decades of dust and clutter. Drawing a believable mess is much more difficult than it sounds. In the U.S., Jim Borgman of the comic strip Zits is a master at depicting the mounds of debris a high school kid generates. But the Latin Quarter overflows with the accumulated detritus of decades of high school students.

“We worked with several art directors for this film: This was partly because we wanted to provide our younger talent the opportunity to work, but also because we had strict time constraints,” Miyzaki says. “I think we were able to portray the mountain of clutter in the Latin Quarter only because we enjoyed drawing it. In each stage of the process—from the storyboards, to the layouts, to the background art—the ideas of various staff members built onto the clutter, so to speak. That’s how the setting was created.”

At a time when American animation is dominated by CG, Poppy Hill reminds the viewer of the singular charms of hand-drawn animation. 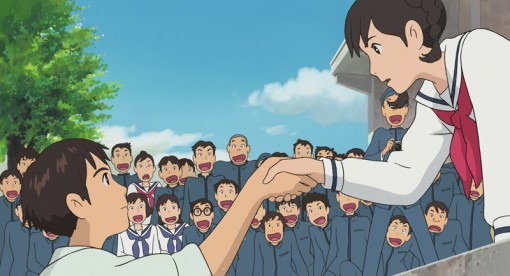 “I’ve been watching hand-drawn animation since I was a child, so I have more of a fondness for it than CG. I believe that hand-drawn animation is better-suited for showing richness in expression,” Miyazaki explains. “However, it is unfortunately true that artists who create hand-drawn animation are aging and decreasing in number. If we want to continue creating animated films, whether we like it or not, we will probably have to work with CG. As CG animation is still developing, it offers possibilities and challenges we will have a chance to confront.”

Goro Miyazaki is already at work on his next project. When the inevitable questions about the experience of working with his celebrated father arise, he concludes…

“Whether in a tangible or intangible way, I learned many things and I feel that it was a very meaningful experience. In particular, his words: ‘Animation is not about portraying reality. It is about showing one’s intention,’ have left a mark on my heart. Those words opened up my view of animation.” 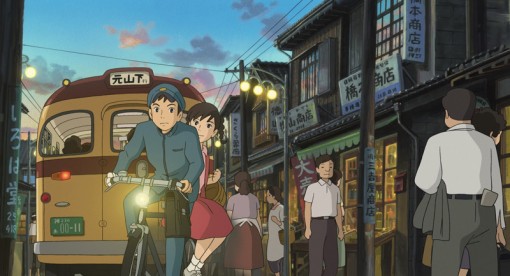 GKIDS will release From Up on Poppy Hill in March of 2013. The feature also received an Oscar-qualifying run in Los Angeles in November.

Charles Solomon is an animation historian and teacher whose most recent books are The Art and Making of Peanuts Animation: Celebrating Fifty Years of Television Specials (Chronicle Books) and The Toy Story Films: An Animated Journey (Chronicle Books). He first interviewed Goro Miyazaki in 2006.