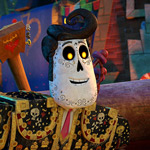 The Book of Life director Jorge R. Gutierrez is as enthusiastic a fan of animation as you can imagine, and like many animation fans, he loves the “art of” books that accompany the release of just about every animated film.

“I love, love, love seeing those original designs and I love seeing the pieces that inspired the movie,” he says. “But then I would see what the movies would turn into and it felt to me many, many times that the film looked like a watered down version of those ideas and those blasts of color and blasts of gorgeous design.”

Gutierrez’s directorial debut, out in theaters Oct. 17, stands in direct contrast to that — so much so that the director hosted a preview in a Beverly Hills gallery of the movie’s production art months before the movie was even completed. The final film shows the strength of that design work, which was inspired — like the story — by one of his native Mexico’s most colorful traditions: the Day of the Dead.

The film tells the story of three friends — Manolo, Maria and Joaquin — who are inseparable as children in the town of San Angel, until a prank gone bad prompts Maria’s father to send her to school in Spain. The split prompts a wager between La Muerta (voiced by Kate del Catillo), ruler of the Land of the Remembered, and Xibalba (voiced by Ron Perlman), who rules the Land of the Forgotten, over which of the boys will end up marrying Maria.

Years later, Joaquin (Channing Tatum) has become a mighty military leader, while Manolo (Diego Luna) has followed family tradition by becoming a matador, though what he really wants is to play guitar. When Maria (Zoe Saldana) returns, the boys both vie for her hand. And with some sneaky intervention by the bettors, the trip takes a wild turn into the Land of the Remembered and back again as the three friends try to save their beloved town of San Angel.

Gutierrez, who previously created and executive produced the series El Tigre: The Adventures of Manny Rivera, says he talked to as many art directors and directors as he could to find out why movies look so different from the concept art. “Since I’m the lead character designer with my wife, Sandra (Equihua), I’m going to make sure these designs never get watered down,” he says. “They will be harder to animate, harder to texture, harder to light – every department is going to suffer a little — but we’re going to keep a look of these things at exactly what the original visual development looked like.”

The final look of the film, with vibrantly colored settings and characters fashioned to look like wooden toys, was worth the extra effort, he says. “Everyone’s really happy with how everything turned out and I really believe that if I had not been the director, all of this stuff more than likely would have changed to make things easier for production.”

The Book of Life is a story Gutierrez has been trying to tell for some 14 years. Its origins stretch back to his childhood in Tijuana, where he saw his first animated TV specials and fell in love with things like the Fleischer brothers’ 1930s Popeye cartoons. “Growing up in Mexico I never thought you could do this for a living,” he says. But when he got older, a family friend suggested that his interest in telling stories, painting and making movies was the very definition of animation. “You get to do all three,” says Gutierrez. “I found out about CalArts when I was really young and it became my dream to go to the school — and I did.”

Book of Life began as a student short Gutierrez made at CalArts. After graduating, he signed with an agent who sent him to every studio in town to pitch the short as a feature film — and nobody bit. “Pretty much, I was told you’re just a kid out of school and we’re not going to make this type of movie. There’s no audience for this,” he says. “So I just worked in the (animation) industry for many, many years.”

The project was briefly in development at DreamWorks, but it was an early association that proved key to finding a home for the project. Brad Booker, who had been an animator working with Gutierrez as an intern on Stuart Little, had become a development exec at Texas-based Reel FX. “They took a chance on the film,” Gutierrez says. “They said, well, we’re a small independent studio in Texas and we want to take a chance on you, if you’ll take a chance on us. And that’s basically what I did. I threw caution to the wind and I moved here.”

A year into development, Gutierrez pitched the film to Guillermo del Toro, hoping the acclaimed filmmaker would come aboard as producer. “It was a famously disastrous presentation,” says Gutierrez. “He said that was a really bad presentation but I can tell there is something really cool here and I know exactly who you are, I know your sense of humor.” With del Toro aboard, Fox signed on to distribute the film.

Working with del Toro was challenging and rewarding. “He was extra harsh on me, in a good way,” Gutierrez says. “I think in the beginning when I would just agree with him on everything, I think he hated that. He kept saying you’re not telling me what you really think, you’re telling me what you think I want to hear. But as soon as we started disagreeing — I stood up to him on certain things — he really loved it.”

The script, which Gutierrez wrote with Doug Langdale, evolved over time, especially once actors were added to the mix. When it came to animating the characters, Gutierrez urged his animators to find the emotion in every moment.

The heart of the matter

“I love subtext in film, so every sequence we’d always talk about what is this scene about, what are characters saying — but what are they really saying, and what’s happening underneath,” he says. Gutierrez told his animators he wanted to see video reference of them acting out the sequence themselves. “That way, I can talk about the performance and not the mechanics,” he says. “It was really hard for a lot of the shot guys to do it, but everyone got into it.”

In creating a story based so heavily on Mexican traditions, Gutierrez says he drew on his own experiences to ensure the film would have universal appeal. “The perceived danger was you could end up making a move that only people from Mexico would get,” he says. “But I feel very lucky I got to grow up on the border. I got to grow up in Tijuana, so I got to see what happens to U.S. culture when it went to Mexico and I got to see what happened to Mexican culture when it came up north. So I was very, very, very careful to balance those two things out.”

He followed the advice of del Toro, who quoted Hitchcock to say that if you want a story to be universal, you have to be specific. “I’m really proud to say the film works on a universal level — but if you’re a Mexican, you’re going to catch a whole other level of stuff.”

Casting the voices in the movie was more successful than Gutierrez had expected. He had written the script with Luna in mind for Manolo and was pleasantly surprised not only when the studio agreed, but so did the actor. The rest of the cast was about finding chemistry with Luna, leading Gutierrez straight to Saldana.

“Zoe Saldana and Diego have a love story in the (Steven) Spielberg movie The Terminal, but they never actually speak in the film,” he says. For Joaquin, Gutierrez wanted someone over the top for Luna to compete with, leading him to Tatum. “We told him that even though the film takes place in Mexico, I want actors from every culture in it and he kind of represents this high school quarterback Mexican hero. He has the suaveness of Brazil and the machismo of Argentina and the smoothness of Spain —Captain Latin America! And he just went for it!”

A similar esthetic ruled the choice of music, with Gutierrez choosing an eclectic selection of songs ranging from Elvis Presley’s “Can’t Help Falling in Love” and Rod Stewart’s “Do Ya Think I’m Sexy” to Radiohead’s “Creep” and Mumford and Sons’ “I Will Wait” — all performed Mexican style.

“Again, growing up in Mexico, you hear music from all over the world, especially the U.S. and U.K., and then those songs become your songs,” he says. “We really got to play with music in a way that I love and again, growing up in the ’90s I got to hear a lot of bands in Latin America that embraced this idea that you are where you come from but you’re also who you want to be.”

The songs were put in the script way in advance of any legal clearance, and Gutierrez says he was fully prepared for the artists to say no. “One by one, each of the bands started giving us these songs,” he says.

And now that the film is done and about to go out into the world, Gutierrez says it’s exciting and frightening at the same time. “This is one of those movies that I could not be more proud of,” he says. “I’ve dreamt about it for 14 years, and now that it’s done I’m a little scared of what life will be like without it. But it’s a dish that’s been cooking for quite a while now and I can’t wait to serve it to the world.”