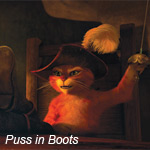 While there has been no shortage of memorable sidekicks in the world of animation, there are few who have been able to steal scenes and hearts as quickly and effortlessly as Puss in Boots. The debonair, swash-buckling tabby, voiced in silken-toned perfection by Spanish actor Antonio Banderas. First introduced in DreamWorks Animation’s Shrek 2, Puss was such an instant charmer that it was decided that he needed to be star of his own movie right after the sequel hit theaters in 2004. 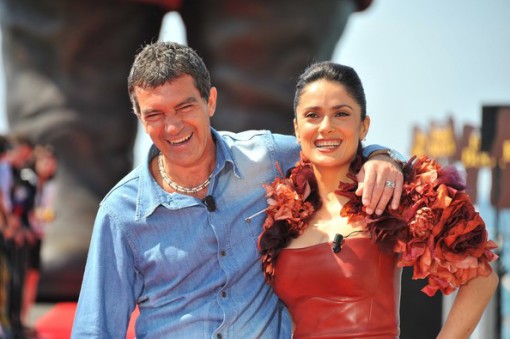 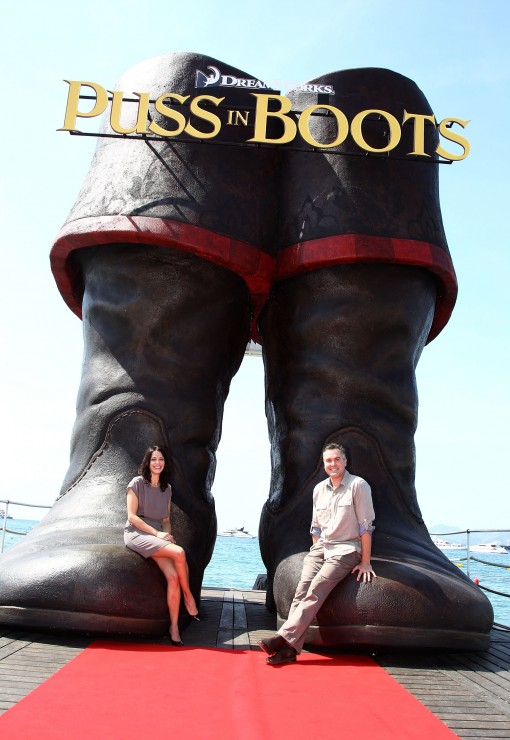 In the new feature, Puss in Boots, audiences get the chance to learn about Puss’s kitten days in an orphanage, where he forms a close brother-like bond with a young Humpty Dumpty (Zach Galifianakis). It’s during those formative years that the two begin to dream about finding a Giant’s castle above the clouds and acquiring the Giant’s prized possession: a goose that lays golden eggs. A seductive female cat fatale known as Kitty Soft Paws (Salma Hayek) and the villainous duo Jack and Jill (Billy Bob Thornton and Amy Sedaris) are three of the other questionable characters Puss meets in this adventure, penned by Tom Wheeler.

The quest to find a worthy storyline for the famous cat began over seven years ago when producer Joe Aguilar was asked to spearhead a Puss in Boots direct-to-video movie. When DreamWorks halted its direct-to-video line, the project changed tracks, got new writers and became a full-fledged theatrical enterprise.

“Originally we had developed a story that was loosely based on the classic Charles Perrault fairy tale, which involved Puss and three sons of the miller,” Aguilar recalls. “However, the studio decided to go back to the drawing board and flesh out a new story told on a grander scale—something that would be more worthy of such a larger-than-life character.”

Once this was decided, the creative team on Puss in Boots set out to make sure the project had an original flavor of its own.

“One of my personal goals was to make sure the movie was quite different from the Shrek movies,” says Aguilar. “We strived to make sure the story of Puss was able to stand on its own. While I love the Shrek franchise, we wanted to go in a different direction. We kept the pop culture references to a minimum, didn’t include any musical numbers that would tie in to current music, and had no sidekicks. It was important for us to stay away from the usual earmarks of spin-offs.”

Another special feather in their cap was the addition of Mexican visionary filmmaker Guillermo del Toro (Pan’s Labyrinth, Hellboy) as exec producer. As director Chris Miller explains, the film got a special bolt of creative energy when del Toro joined the team, offering his unique vision and cinematic world view to the Puss legend.

The artistic team went on to explore various influences, including a subtle tip of the hat to the classic Spaghetti Western movies of Sergio Leone. Setting the movie in southern Europe helped the filmmaker build a colorful setting that matched Puss’ and Banderas’ Spanish origin. This pan-Latin atmosphere also created a warmer color palette than the one used in the Shrek quartet, delivering a more photorealistic landscape of reds and yellows, as opposed to the more cartoony blues and greens of the previous films.

“Puss was my favorite character in all of the Shrek movies,” recalls the film’s director Chris Miller, who also helmed Shrek the Third. “Here was this character with a great sense of bravado, romance and charm. Even as a sidekick in Shrek 2 and 3, he always seemed to have this aura of history and mystery. You always wanted to know where he came from and what his story was, although there had been a few tidbits about his past in the other movies.”

Also of great importance to the director was not losing sight of the emotional elements of Puss’s tale. While the story unfolds in a colorful, legendary world, what keeps audiences enthralled is finding about the key events in the diminutive hero’s life that made him that cat he is today. “One of our biggest challenges was coming up with a story that would resonate on a deep, emotional level,” notes Miller. “We were lucky to end up with this classic redemption story featuring this brave, nomadic lover. Of course, as the drama becomes more serious, the jokes become funnier as well because we have a tiny cat at the center of this powerful material.”

Miller, who has been with DreamWorks since the early days of Antz, admits that exploring the origin story of Puss proved to be quite a liberating experience for both him and the rest of his creative team.

“There were certain things that we have held on to which are the touchstones of the Shrek films, but we are now exploring the more fantastic legends behind the fairy tales. It’s a more otherworldly universe, both in terms of story and the visuals.”

The way head of story Bob Persichetti sees it, Puss is such a unique character that he has dictated the tone of the comedy and his films from the very moment he was introduced in Shrek 2. He points out that while Puss is part Zorro, part Indiana Jones and part Clint Eastwood-type cowboy, he also has several weaknesses, which make him even easier to admire. “We felt very lucky that our main leading man isn’t a straight, boring character, which can happen a lot in movies,” adds Persichetti, who also worked as story artist on Shrek 2 and Monsters vs. Aliens. “Puss is never outshined by any of the other characters.”

Many of the film’s key creative team members believe that it’s Puss’s tenuous relationship with Humpty and their common dream of finding the golden goose that gives the story its powerful Dickensian momentum. “We knew we wanted to team him up with a fairy tale character that wasn’t a sidekick, because we didn’t want to follow the Shrek pattern,” explains Aguilar.

“Somebody pitched Humpty Dumpty and the whole notion of having this giant egg be a central character in the movie felt absolutely right. It’s really a story about their brotherhood. Zach [Galifianakis] brings so much warmth and vulnerability to this character, which is necessary, because if Humpty was going to be a main villain, we had to mask it and have Jack and Jill emerge as the bad guys at first.”

As strong as the storyline and the characters are, it’s the stunning visuals and sophisticated caliber of animation that allow the film to make a big splash on the big screen. “I think it pushes the boundaries of CG character animation,” notes Miller. “The comedy is smart and funny, but visually, we are attempting to do things that I haven’t seen in other animated movies. The world of Puss and all these magical characters could only exist as an animated project, so I think that’s why we felt justified to tell his story in such an elaborately crafted way.” 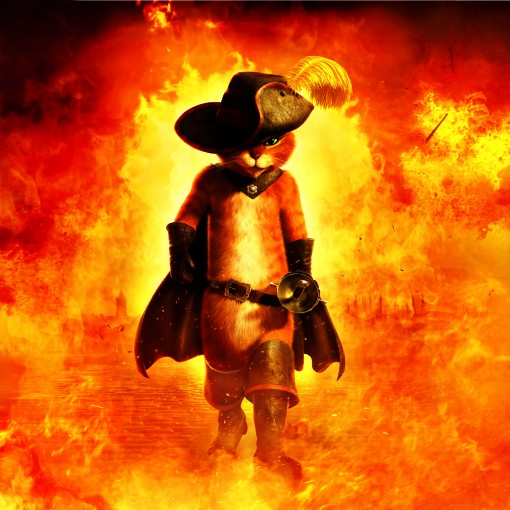 However, as producer Latifa Ouaou points out, the movie would not be possible without the magnetic personality of the lead. “The character of Puss in Boots made it easy for us to get excited about creating something new,” she adds. “He’s bold, romantic, full of color and flavor and he’s got more swagger and style than any other cat in Spain. We could only imagine the world in which he came from would have the same attributes. Truth be told, he’s such a handsome feline that he looks good in any environment.”

After working diligently for so many months on the feature, Miller and his team are thrilled to have delivered a movie that surpasses expectations.

“I think it all came together so beautifully in the end,” says the helmer. “I have to say that the movie looks fantastic in 3-D and really offers a rich theatrical experience. The sequence in which our characters climb the bean stalk and enter the Cloud World are really stand-outs because of the way the 3-D medium is used. Our visual effects team did an amazing job of depicting the growing beanstalk and the magical cloud formations. Overall, I’m really proud of the visual style of the film, which is warm, bold, dynamic and liberating, very much like Puss himself.” 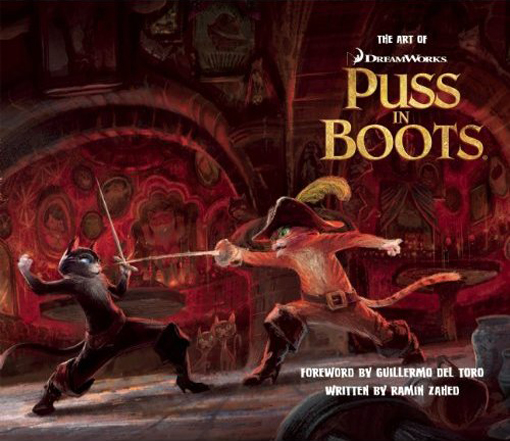 Insight Editions The Art of Puss in Boots

This article is an edited excerpt from the new Insight Editions hardcover The Art of Puss in Boots ($39.95).