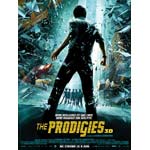 A record number of top-notch animated movies are slated to be released in France. Is it just coincidence or a sign of things to come?

There must have been something special in French waters (Perrier, Evian or Vittel?), because it seems that the country is churningmore high-quality animated features than ever before. After serving up the Oscar-nominated The Illusionist, Allez Raconte, A Cat in Paris (Une Vie de Chat), Arthur 3: Les Guerre des Deux Mondes and Santa’s Apprentice in 2010, the country is continuing its hot streak with titles such as Titeuf: Le film, The Rabbi’s Cat (Le Chat du Rabbin), The Prodigies, Les Contes de la Nuit, Un Monstre a Paris, The Boy with the Cuckoo-Clock Heart and Cinderella 3-D.

Although many of these titles may not get the worldwide publicity and attention of the latest studio offerings from Disney, Pixar and DreamWorks, each one of them offers inspiring new ways of telling stories and experiments with the possibilities of the medium in ways that we rarely see in Hollywood blockbusters.

The Double Life of a Parisian Cat

Take, for example, the 2D animated feature A Cat in Paris (Une Vie de Chat), which was released last year in France and is just beginning its run in festivals and select theaters around the world. Directed by Jean-Loup Felicioli and Alain Gagnol, this charming tale is tailor-made for discerning family audiences. Produced by Folimage, the film is distributed by Gebeka Films in France, Film Distribution (worldwide) and GKids (in the U.S.) and co-produced by Lunanime, Lumiere, Digit Anima and Rhone-Alpes Cinema. 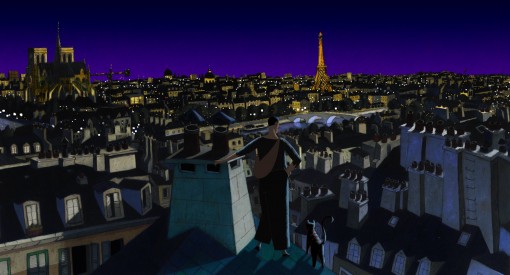 The beautifully animated project centers on a Parisian cat that is part of a secret ring of thieves at night. Writer/director Alain Gagnol tells us that the inspiration for the movie came from his own personal experience. “From my window, I can see the roofs of the buildings in my neighborhood,” he says. “There are a lot of cats that wander out there all night long, and I couldn’t help wondering where they were going and where they come from…that was the beginning of the story!”

Gagnol began the script in 2004 and it took about two years and a half to finish it. The film, which cost about 4.5 million euros ($6.6 million), began production in 2007 and wrapped in four years. “We wanted to make a film noir for children, with gangsters and cops, presented in a quite realistic atmosphere,” he adds. “For instance, our cat is a real cat, he can’t talk!” 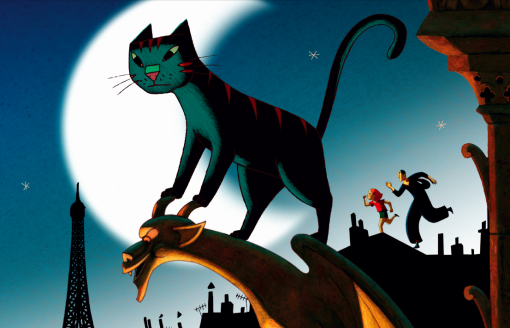 The hand-drawn animation took about nine months to execute. “We only used computers for the coloring part, “ notes the director. “Even the lights on the characters are hand-drawn as well, which was a huge work. I have been wo rking with Jean-Loup for a long time, but we only made shorts before. I wrote the scripts, Jean-Loup is the art designer, and we both directed all the movies. The challenge was to be able to work with a big team! We had to be very careful about the style.”

Gagnol and Felicioli began their partnership at Folimage about 15 years ago. While Gagnol joined the studio to work as an animator, he wasn’t quite happy with his own drawings and wanted to partner with someone who could deliver original designs. Felicioli, in turn, was looking for a writer, so life the studio worked out perfectly for the two friends. 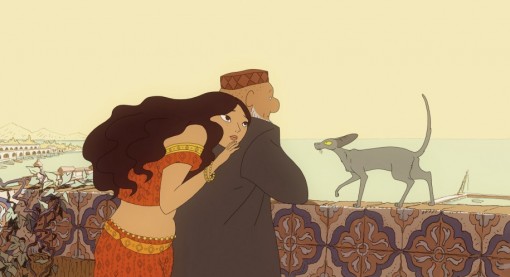 One of the qualities that sets A Cat in Paris apart from the onslaught of similar-looking CG-animated features opening at the box office each week is the fact that the story is told in classic 2D animation, and that’s something Gagnol is quite proud of. “The 2D animation fits our style perfectly,” he notes. “Anyway, we need to be different from the other movies which are mostly made with computers. And, to be honest, for us, the easiest way to make our films is hand-drawn animation because that’s how we’ve always done our shorter projects.”

Gagnol, whose next project is Phantom Boy, a detective tale about a boy with superpowers who helps a wheelchair-bound policeman battle a mob boss says the popularity of comic-books in France has helped bolster the animation industry. “Many of the comic-books are best sellers and a portion of the audience is used to appreciating many different kinds of drawing styles,” says the director, who also counts himself as one of the fan of the Satoshi Kon and Pixar movies.  “I think that’s one of the reasons why French animated movies are very different from each other. We also have the tradition of the films by auteurs, for better or for worse.”

A very different kind of cat is the center of another animated movie coming to French theaters in June. Based on a popular graphic novel by Joann Sfar, The Rabbi’s Cat is set in Algeria in the 1930s and is directed by Antoine Delesvaux and Sfar himself. Continuing the country’s tradition of artistic, traditionally animated projects, the movie centers on a cat who decides to practice Judaism after he swallows a parrot and learns how to speak. 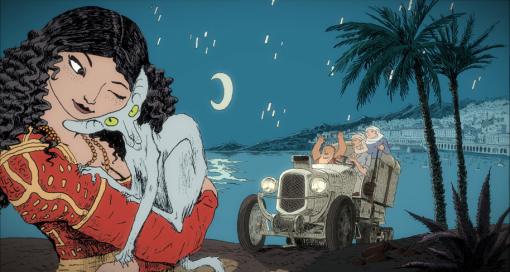 Delesvaux, a longtime fan of Sfar’s comics, and his team at Banjo Studio in Paris began work on the project in 2008. He says it was obvious that this colorful tale about a cat who learns how to speak in Africa during the ‘30s seemed to lend itself very well to animation. “I had been a hug fan of Joann’s work even before meeting him in person,” says the producer-director. “We decided to collaborate with Clement Oubererie through our company Autochenille Productions and Banjo Studio to adapt the comic-books as an animated feature.” 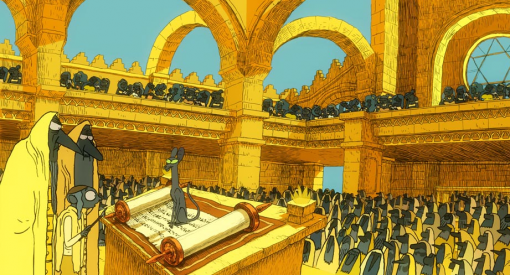 Working with a budget of less than 10 million euros ($12.7 million dollars), Delesvaux and his company were keen on staying true to the film’s graphic roots. “Joann works with pen and ink and we used the same traditional tools in our studio and got great results. The animators worked closely with the actors to depict realistic movements for the characters. You can really see the evolution of Joann’s design on the screen. The coloring process was also very complicated because the backgrounds required special individual lighting treatment.” 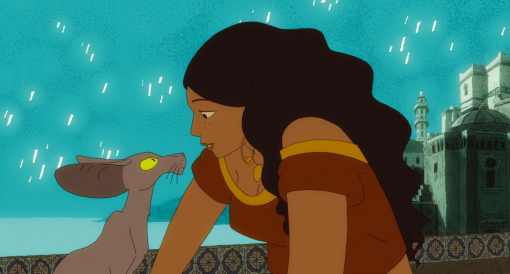 The director, who names Miyazaki, Brad Bird and Disney’s Nine Old Men as some of his influences, says that he’s happy to see the boundaries between animation and live-action films disappear in recent years. “We are seeing the growth of an industry that has too often been put aside in the past,” he notes. “There is a rich abundance of exciting ideas and talent in the French animation sector and we are experiencing growth in all areas of animation lately.”

In addition to traditional 2D and CG feature, French auteurs are also experimenting with motion capture technology to deliver projects aimed at older audience. A perfect example is director Antoine Charreyron’s upcoming adaptation of the bestselling book by Bernard Lenteric, The Prodigies. Produced by Onyx Films, Fidelite Films and Studio 37, the film will be released in France by Warner Bros. on June 8. The fantasy centers on five young people with special powers who band together to plan their revenge after they’re assaulted by dark forces in New York’s Central Park.

Charreyron, who began his career working on videogames such as Tomb Raider VI, Terminator 3: Rise of the Machines and Alphanim’s TV series Galactik Football says he was naturally drawn to the movie because if its powerful subject matter. “For me, the novel was quite fascinating because it really focuses on the anger that you have as a teenager, which you lose when you grow up,” says Charreyron. “I was the same way—when I was younger, I had an amazing amount of anger and I was quite aggressive, but I learned to control it as I grew up. So I thought the author chose an interesting way of exploring this subject.” 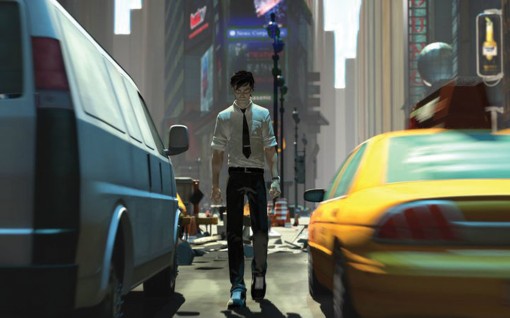 Relying on his expertise in videogames, Charreyron and his team created the world of The Prodigies by using a combination of motion capture technology (Vicon) and key-frame animation. Working with a budget that was reportedly between 16 and 20 million dollars, the facial animation was created by the usual method of putting markers on actors’ face, but for larger sequences, especially for the scene in which New York is destroyed, key-frame and CG technologies were employed. 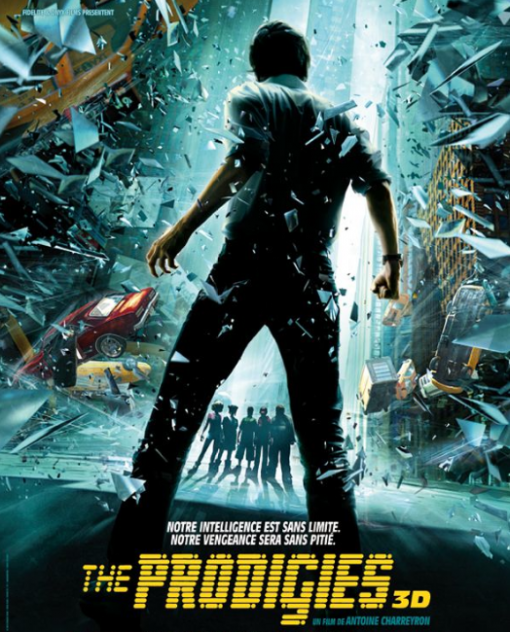 “My first job out of school was as a key-frame animator, and I like to use different technologies together,” says the 34-year-old director. “I think the most important thing to remember in a project like this is connecting with the feelings and emotions of the characters.”

When asked about some of the negative reception motion-capture films have received in recent years, Charreyron points out that there are certain rules that artists have to respect in the world of mo-cap. “Look at Avatar, for example,” he explains. “You have to create a specific style in this world. If you try and be realistic, the human eye can detect the illusion. Your designs can’t be too close to reality. That’s why you accept the tall blue aliens in Avatar. You feel the emotions of the characters. For The Prodigies, we relied on the amazing work of Marvel artist Humberto Ramos, who created these angular designs for the characters, which are far from realistic.” 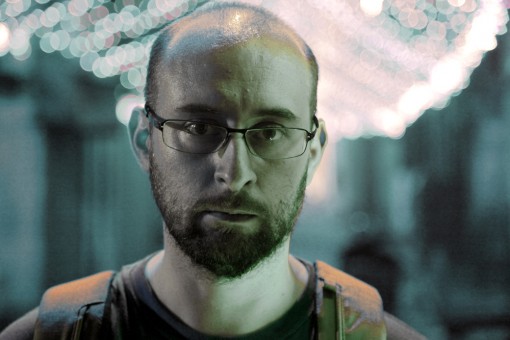 Like many of his compatriots, the director of The Prodigies is excited about the doors that new technologies and visionaries like James Cameron and Zack Synder have opened in recent years. “I think animation is ready to tackle topics beyond cartoony animals,” he offers. “Pixar and DreamWorks have done amazing work in the family feature arena, but I think audiences are ready to embrace CG-animated, action movies or science fiction fantasies. Here in France, we are fortunate to have artistic control over our movies, so we can push the envelope a bit farther. Our animated features have more in common with indie art pictures in the U.S., so we are able to exercise more freedom in our projects.”