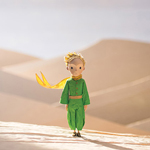 The Little Prince Director Mark Osborne uses the beloved novella to demonstrate the power such tales have on people’s lives.

Few books are as beloved as The Little Prince, a stunning fantasy novella by French pilot and author Antoine de Saint-Exupery. First published in 1944, it has since become one of the most popular books in the world. The tale of an aviator stranded in the desert who tries to explain the world to a young prince fallen to Earth from an asteroid featured lovely watercolor illustrations and was styled like a children’s book but offers deep insights into human nature that are especially compelling to adults.

Mark Osborne, best known for directing DreamWorks Animation’s 2008 hit Kung Fu Panda, the book had a personal connotation that made him hesitant when he was first approached about possibly directing a big CG animated adaptation.

“My reaction was no,” says Osborne, who took that call about five years ago from France-based Onyx Films, which was working with Saint-Exupery’s estate. “I said, ‘You can’t make a big movie out of this little book.’ It’s just too precious and it’s too important to the people that read it.”

But then an idea crept in that changed his mind. “I realized there was this incredible opportunity to tell a story about how powerful the book can be in somebody’s life,” he says. He came back to Onyx and said he thought there was a way to tell a larger story with CG, but the book itself should be done with stop motion.

“That idea never got shot down,” he says.

That idea was to tell a story about a little girl (voiced by Mackenzie Foy) who lives in a very ordered world where her mother (Rachel McAdams) has organized her life down to the minute in an attempt to give her the very best shot at succeeding in life. But the girl’s attention is pulled away by her eccentric neighbor the Aviator (played by Jeff Bridges), who causes all sorts of trouble and passes on to her the story of The Little Prince as an experience he himself had. As the girl is drawn into the story, it changes her life and leads to an unexpected merging of the two realms in the film’s final act.

The idea, though, came about slowly as Osborne worked on a treatment and then a script first with Irena Brignull in collaboration with the story team, headed by Bob Persichetti.

“There were some big ideas in the beginning and there were some really interesting and bold notions about how to take this very special work and how to bring out the themes and the elements from the book as much as possible,” Osborne says. “That was really the goal from the beginning, but there’s a lot of artistic collaboration along the way to get us to the final result that you see in the film.”

Work on the film began in Paris with development at Onyx, which transformed during production with some of its partners to become On Entertainment. Production took place in Montreal, with Mikros Image handling the CG side of things and several companies, among them TouTenKartoon, working on the stop-motion sequence.

How to make a film that effectively moves from CG to stop-motion and back again was the first big challenge for the show. “It was a compelling idea conceptually but very complicated to work out, and to be honest it was a notion that only became real once (stop-motion creative director) Jamie Caliri joined the project,” says Osborne.

Caliri brought production designer Alex Juhasz and lead animator Anthony Scott from the United States to Montreal, while the rest of the crew was from Canada. “We went into it believing we would make it work and that we would come up with the right way to do everything,” says Osborne. “We were working in a low-budget situation and it was an incredible challenge and Jamie really rose to the occasion.”

The most distinctive element of the stop-motion is that all the elements look like they are made of paper. “I wanted to link the two worlds by having the paper that the little girl is reading the story on inspiring her, and that imaginary world that she created,” Osborne says.

Puppets were built with a ball-and-socket armature and covered in all kinds of paper. “Everything that you see on screen in the stop-motion world, almost everything, is made out of paper,” says Osborne.

One of the key tricks was using for the skin a substance called paper clay made from clay with paper pulp in it. “It was not an easy material to work with but they came up with a brilliant way to make sure that they could keep that paper look on the faces,” says Osborne.

The CG elements had a significant purpose as well, being used for the real world — both the highly ordered world the girl and her mother live in, as well as the more natural one of the Aviator’s home.

“We wanted to create a grown up world that was suffering and not a healthy environment,” he says. “And then when she meets the aviator it becomes more robust and colorful and natural.”

That approach extended even to composition and photography: Long lenses and formal compositions were used to create a sense of distance between characters in the grown-up world and then wider lenses that created intimacy were used for the Aviator’s world and the stop-motion scenes.

“What it allowed us to do was create, not a realism, but a sort of realistic quality to the light and to the lighting,” Osborne says. “I really wanted the lighting in the CG part to have a tangible quality because I wanted that to link us to the stop motion. The quality of light and color were the main links in the paper texture between the two worlds.”

Though it is being released in English-language markets late in its distribution plan, the film was originally recorded with the English cast and animated to its performance. Osborne credits animation supervisor Jason Boose and character TD supervisor Hidetaka Yosumi with getting emotion-based performances.

“We weren’t relying on things animation typically relies on to tell the story,” says Osborne. “It was really Jason and Hide Yosumi, who worked … to make sure the characters were rigged enough that they could do the delicate performances necessary.”

With the little girl in nearly every shot and her mother being extremely important characters, Osborne says the production actively recruited women animators, eventually getting a team that was about 35 percent female.

“We really wanted to have a real physical understanding of what a little girl looks and feels like,” he says.

The English version of the film premiered at Cannes last year, followed by dubbed releases in markets ranging from France and Italy to Brazil, Mexico, China and Japan. It’s earned about $80 million so far, without having opened in an English-speaking market.

Osborne says he’s excited to see the original version of the movie released at last and hopes it’s received as well as it has been in other markets.

“People think it’s impossible (to adapt) and then they come out of the movie in tears and say, ‘How did you do this?’” he says. “I really wanted the movie to be a conversation. I wanted people who loved the book feel like the movie treated the book with respect and care.”

A Third of Firsts
No Limits