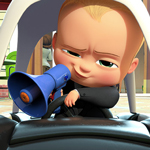 It may be the most-recent, cutting-edge release from industry powerhouse DreamWorks Animation, but director Tom McGrath says The Boss Baby is at heart a love letter to the history of animation.

“I really wanted to make this feel like a Disney movie from the ’50s or ’60s, when I was growing up, because it felt like (back then animation) was more artistically driven,” says McGrath, who previously directed for the studio MegaMind and the Madagascar trilogy. “Everyone who came on the show, I’d show them the opening of Lady and the Tramp just because this is the epitome or the peak of the golden age and how it was more impressionistic and less realist. … I’d say, this is not what the movie should look like but it’s what it should feel like.”

That such touches are clear to those who look for them is one of the joys of The Boss Baby, opening in theaters March 31 and based on the best-selling children’s book by Marla Frazee, about a 7-year-old boy who imagines his new baby brother as a business-suit wearing boss monopolizing all his parents’ family time.

Austin Powers trilogy scripture Michael McCullers expanded the book into a feature in which the Boss Baby (Alec Baldwin) is on a secret mission for Baby Corp.: Spy on his new parents, who work for rival Puppy Co., and find out about a secret new puppy it plans to launch in the ongoing marketplace battle over who gets the most love. Only the Boss Baby’s older brother Tim Townsend (Miles Bakshi) can see what he’s up to.

It’s a story almost everyone on the crew found a way to connect with on a emotional level, says producer Ramsey Naito.

McGrath says it was one particular sequence on Madagascar 3: Europe’s Most Wanted that inspired The Boss Baby. “There’s a circus sequence that we did that was based on the pink elephants on parade (segment of Dumbo) and was more abstract,” he says. “I said, I want to do more of that.”

The Boss Baby lent itself to such an approach being told from the point of view of Tim, himself an imaginative kid who imagined several fantasy sequences, each animated in its own style. “We actually had a separate pipeline for doing that,” says McGrath. “And a team of five artists led by Andy Schuler, who designed those worlds.”

But that was technically challenging, Naito says. “We knew we needed to get (the fantasy sequences) into the pipeline because it all has to go through the same thing, but there were certain moments where we were like, does it really?” says Naito. “Ultimately, we did, but it was that challenge of figuring out how do you take this highly stylized, pretty much two-dimensional artwork that you see in these fantasy moments and realize that in 3D? How are we going to do that and make it feel seamless with the rest of the film?

McGrath wanted his animators — on top of their schooling in animation history and 1960s graphic design — to have the kind of impact hand drawn animators had in the golden age. One way he did that was to reduce by half the number of controls in their rigs.

“My biggest complaint with CG animators is they want to keep moving it and moving it to the point where it just feels mushy,” he says. “Having (the rig) limited just made you commit to a strong expression.”

McGrath sought to convey some of the principles he had learned at CalArts in the 1980s, studying under such renowned animators as Hal Ambro, Frank Thomas, Ollie Johnston and Glen Keane. “We watched Mickey in the Clock Cleaners (short film), and Hal Ambro would make us watch it backwards too because you could see the timing and how it was exaggerated,” he says. “They should teach more of that there, because timing is an art and it’s a very personal choice as an animator.”

The Boss Baby himself was designed like a 2D character that might have appeared in something like a Chuck Jones cartoon. And figuring out a character that alternates personality from acting like a real baby to acting like a big-shot CEO was a lot of fun. While there are tons of videos of real babies online, McGrath had to look to the business world and some of its icons to round out the character.

“I took one management class that was really silly, but I remember they had you do this thing where you’re ‘holding the volleyball,’ and you see a lot of business people when they make presentations are holding the volleyball,” he says “You’d watch (Steve) Jobs unveil a phone or something and you look at all these political figures and find little tics because that defines the personality.”

While the movie is highly stylized, CG animation still requires a certain level of reality for its physics. The ultimate example, Naito says, was baby jiggle.

“Even though this was a highly designed film, you know we still had to get baby jiggle right, and we had a task force on baby jiggle,” she says.

One of the unexpected issues the movie may face is that Baldwin has become popular impersonating President Donald J. Trump — himself known as a tough businessman — possibly attracting comparisons between the two roles.

McGrath says nothing in the movie is based on or intended to comment on Trump. “I just want it to be a timeless piece,” he says. “But, yeah, I think a lot of people don’t know how long it takes to make an animated film so they probably think we started this movie three months ago as a movie about Trump.”

The movie also makes a big statement of the value of family over work — a tough message to deliver given how animation is so time consuming that those working in it often miss out on family time. McGrath says he’s worked on six movies over the last 16 or 17 years with only a week’s break in between and has first hand experience with the issue.

“After this one, I’m going to take a huge break,” he says.

Back from the Dead
Blue and All-New