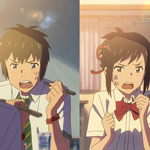 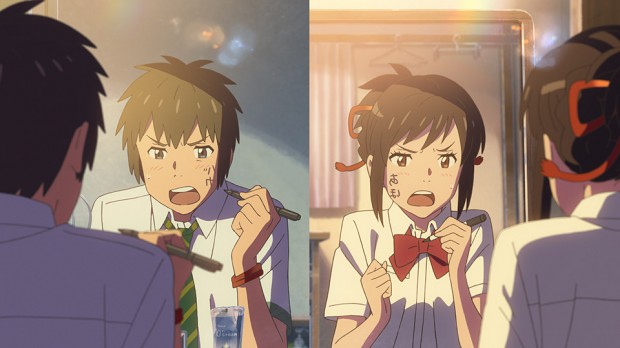 If there’s a sign that anime features from Japan will survive the current transition phase exemplified by the winding down of Studio Ghibli, it’s Your Name., a bright and thrilling time-travel, body-swapping romance story that’s broken through into the award season race.

Directed by Makoto Shinkai, Your Name. tells the story of teenage Mitsuha, who laments the slow pace of life in her rural lakeside hometown, and Taki, also a teen, but living a very different life in Tokyo, where he aspires to a career in architecture and works part-time in an Italian restaurant. For unknown reasons, Mitsuha wakes up in Taki’s body and has to life his life; the same happens to him in her body. It takes them a while to figure these occasional transfers are not dreams but really happening — and that this other person is living their life. They send messages to each other via smartphone, notes and even writing on the other person’s arm.

On the anniversary of a major disaster caused by comet crashing to earth, the swaps stop. Taki searches for Mitsuha and, in a twilight moment, discovers some surprising truths that turn the story on its ears and propel the movie into a breakneck paced finale that keeps the audience guessing right up until the final moment of the film.

The film has been a smash hit in Japan since it opened in August, sitting atop the box office rankings week after week on its way to racking up more than $175 million U.S. — and counting. Anime importer FUNimation has stepped in to bring the movie to the United States, booking the movie for an Oscars-qualifying run in New York and Los Angeles, with an eye toward earning a nomination and a theatrical release for subtitled and dubbed versions in the spring.

Shinkai is best known for directing the anime features 5 Centimeters a Second and The Garden of Words, and was surprised by the film’s enormous success and gratified audiences on both sides of the Pacific are embracing the film and its message so openly.

Speaking through a translator during a recent visit to Los Angeles, Shinkai says he entered writing the movie with the goal of reaching a wider audience. “I felt like I could do something new,” he says. “The reason I felt that way was because I was doing several commercials and I’ve done movies in the past as well and I’ve also been writing, for this publication, short stories, fiction. With all of that combined, I felt I had what it took to write something really daring.”

The idea that sparked the movie was a simple one: Shinkai wanted a boy-meets-girl story where they meet at the end, an idea that came from pondering the question of why certain people meet and connect as friends or a couple. “I think a lot of times it’s a series of coincidences or just time and place, but you always ask the question why,” he says. “There’s sometimes no explanation and I wanted this movie to almost give meaning to that reason. Maybe there was some path we had forgotten or some link or something that brought us together that was meant to pull us together but we just can’t see it because it’s operating in a higher dimension.”

Shinkai turned to older Japanese literature — mainly poems — for ideas on how to connect the pair and let them swap bodies. “One in particular that gave me the idea about the dream is a poem by Ono no Komachi,” he says. “In this song, or poem, she talks about how you can meet someone in your dream, but when you wake up, all you’re left with is a feeling of nostalgia, and had you known it was dream I would have liked to stay there forever.”

Using the dream-like nature of twilight allowed him dreams and the real world to intersect for the key turning point in the movie. “The idea for twilight stems from the origin (in Japanese) of the word itself,” says Shinkai. “It means, when you derive it, ‘Who are you?’ … That links with the idea of this moment that is neither day nor night, that bridges a certain gap, and you don’t know who is standing before you. At the same time, there is another derivation or origin of the word that means: to meet the demons or devils. And, again, because it is neither day nor night, it is that moment of time during the day where you could sort of transcend different lives and dimensions, if you will.”

The earthquake and tsunami that ravaged Japan in 2011 was said to be an event that occurred every thousand years, Shinkai says, prompting him to think about a recurring natural disaster as a plot device, leading directly to him using the comet crash as the flashpoint for the story’s events.

Developing these ideas into a screenplay required a complex structure, Shinkai says. “I really wanted to incorporate elements of comedy as well as unpredictability for the audience, and in doing so, I came up with this very complex timeline narrative structure,” he says. “At that point I didn’t necessarily feel like understanding the complex structure and timeline was necessary for the audience and, if anything, I wanted to shift the focus to the relationship between the two main characters.”

Shinkai also pushed the tempo of Your Name. To make it faster and more engaging to a young audience, than his previous movies. “A lot of the younger generation has so much information at their fingertips, they always do something with the smartphone in hand,” he says. “I wanted to create a movie that didn’t even give them a chance to do that, so that’s why I packed a lot of information in a short period of time that wouldn’t even allow them to pull their cell phone out and try to chat with their friends.”

While he considered having the characters connect over distance via technology, he instead stuck with the more mysterious idea in the final movie of body swapping and a bit of time travel. “Perhaps it didn’t need the fantasy element of body switching — it could have just been a simple online site or some kind of social media,” he says. “But was there any sort of social commentary woven into that? I would say no.”

Shinkai was flattered to find that the film had so far been so well received by fans and critics. The audience for Shinkai’s previous films was mostly an otaku — or fan-based — group. But the wide success of Your Name. has taken it to the wider general audience that filmmakers like Hayao Miyazaki reached.

“It was always my intent to create something people would be able to engage with,” he says. “Any time I made a movie it was the best I could do with what I had both creatively and team wise at that moment. And the people who ended up supporting it was just a result of what I was able to create. But after I had a few projects under my belt, I think I increased my capacity and I was able to create something of this nature.”

You may also like...
Related Topics:5 Centimeters a Second, Funimation, Makoto Shinkai, The Garden of Words, Your Name

Seriously Crazy
Into the Deep End