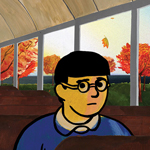 My Entire High School Sinking Into the Sea

It started as a bit of a joke in comic book form, when cartoonist Dash Shaw created in 2009 a short comics story titled My Entire High School Sinking into the Sea.

“When I was a teenager in the ’90s, the majority of alternative comics were autobio comics,” says Shaw, best known for comics such as BodyWorld, New School, Doctors and Bottomless Belly Button. “Then on the opposite end of that were the boy’s adventure superhero comics. And so the joke of my comic short story was that I was it was like a fake autobio comic that had been thrown into a boy’s adventure comics setting.”

The story stuck with Shaw as he expanded into animation with a 2009 web series titled The Unclothed Man in the 35th Century AD for IFC, followed by a 2012 music video for Icelandic rockers Sigur Ros, and now has become a full-fledged feature film that hit theaters April 14 via powerhouse indie distributor GKIDS.

Shaw wrote and directed the feature, which tells the story of teenage Dash Shaw, whose regular life working on the school paper and hanging with best friend, Assaf, is thrown into turmoil when his seaside school tumbles into the ocean. Told with Shaw’s hand drawings on paper, the movie looks like nothing else out there as it follows young Dash and his friends’ attempts to survive the disaster. It plays like a John Hughes movie crossed with Titanic or The Towering Inferno, and has earned rave reviews on the festival circuit.

Something about the original comic stuck with Shaw as something that could be adapted to an animated feature, particularly the way it was colored like an abstract expressionist painting in the mode of Mark Rothko. “That felt like a funny way of visualizing teenage angst, that the existential angst of those paintings would be paired with teenage angst felt appropriate and goofy,” he says.

It also seemed to be the most doable idea he had for animation. “This school movie had kind of a very simple video game structure,” he says. “I thought I should start with things that feasibly I could do myself, like it’s not very hard to paint classroom backgrounds.”

The movie version of Dash Shaw bears some resemblance to the director in his teen years. “I was a nerdy teenager and I worked on the school newspaper, so I had friends like the friends in this movie,” he says. But he says the character is only about half based on reality, the other half on fantasy. “I’m not a jerk like the guy in the movie and I feel like it’s more maybe a parody of autobio stories or parody of those kinds of Hollywood movie that are clearly the director’s fantasy.”

Asked if he thinks viewers will confuse the fictional Dash with the real one, Shaw says he hopes not. “I feel like it’s really clearly a joke, but maybe I’m being optimistic,” he says.

Shaw also took inspiration from the works of other comic book artists who turned to animation, such as Osamu Tezuka on the original Astro Boy. “He wanted to compete with Disney but the Japanese television companies didn’t give him enough money, so he created limited animation and he relied on his skills as a cartoonist to make cinema, and I always thought that that was super awesome,” he says.

Daunted by the idea that making animation required a big staff and a budget, Shaw changed his mind when he saw how simple technology had made it to create things like animated GIFs in Photoshop. “Once I saw that, I was like, oh you can make a whole movie, just it would just take doing those drawings,” he says.

Shaw began work on the movie with his wife, animator Jane Samborski. “She really is the technical mind behind the movie,” he says.

All of the movie was drawn on 8-1/2-by-11-inch paper and animated using After Effects. “There’s no lines that are made on the computer,” says Shaw. “I storyboarded it in color markers and so there was a guide for the whole movie and indications of how the color would be and how everything would look.”

Shaw used the boards to divide up the labor for each shot, with Samborski sometimes drawing the underlying images and friends of Shaw’s from the comics world contributing things like painted backgrounds. Shaw inked all the drawings himself before they were scanned in the computer.

This way of working saved the project at one point when about 10 minutes of the movie was lost to a cut-and-paste error. “But we still had all of the actual drawings, so it only took us a couple of days to put it back together,” he says.

Unusual for most animated projects, Shaw had about 80 percent of the animation done before he began looking for actors. Knowing nothing about that side of movie making, Shaw contacted producers Kyle Martin and Craig Zobel, whom he had met while they were all fellows at the Sundance Institute in 2010. “I saw that they were two people that had made awesome movies relatively inexpensively and they both happened to live in my neighborhood when I lived in Brooklyn and so I asked them to help me produce the movie,” says Shaw.

The producers suggested for the lead role Jason Schwartzman, who Shaw had met years ago and stayed in touch with. Shaw also had met Lena Dunham at the Sundance labs and Martin had produced her feature film Tiny Furniture. With those names attached, and a chunk of the movie to show, the rest of the cast filled out with the likes of Maya Rudolph, Reggie Watts and Susan Sarandon as Lunch Lady Lorraine.

Once the voices were recorded, the animation was adjusted to accommodate the actors’ performances. “The drawings were done but they would be changed to match what the actor came up with,” Shaw says.

The film was full of new experiences for Shaw, who says he’s enjoyed the process of collaborating with actors, an editor and to see his movie play first at film festivals and now in theaters.

You may also like...
Related Topics:Dash Shaw, Gkids, My Entire High School Sinking into the Sea, Sigur Ros, The Unclothed Man in the 35th Century AD