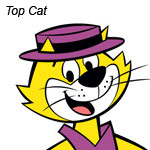 Don Gato y su Pandilla, a Spanish-language 3D animated feature film based on the Hanna-Barbera character Top Cat, has broken the opening weekend box office record for a local production in Mexico, according to The Hollywood Reporter.

The film earned about $3.2 million on just more than a thousand screens in its first weekend, beating out major Hollywood releases. Top Cat has long been a popular character in Mexico.

Here’s the trailer for the film (in Spanish, of course):

The film was produced by Anima Estudios in Mexico and Illusion Studios in Argentina. Warner Bros., which owns the Hanna-Barbera characters, distributed the film. The studio has no plans to release the film in the United States, though the Reporter says the movie will open Oct. 13 in Argentina and Peru, with talks ongoing for release in six other South American markets.

Top Cat originally ran in the United States on ABC as a half-hour Saturday morning cartoon in the early 1960s.