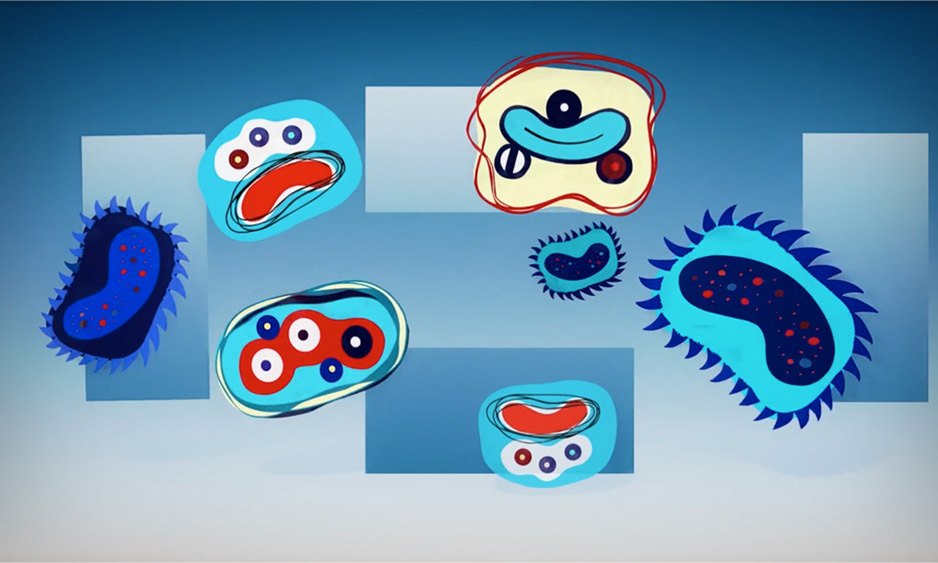 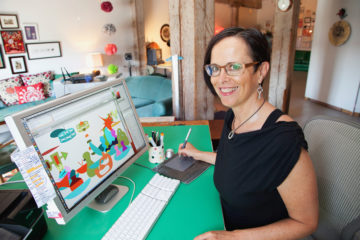 This month, indie animation artist Joanna Priestley’s latest project North of Blue debuts at the Ottawa Animation Festival. The dynamic 61-minute-long abstract animated piece was nominated for a Cristal at Annecy and marks a new chapter for the Portland, Oregon-based artist, who is best known for acclaimed shorts such as Voices, She-Bop, Utopia Parkway and All My Relations. Joanna was gracious enough to answer some of our burning questions about her splashy new feature:

Animag: What was the inspiration for this work?

Joanna Priestley: North of Blue began in February 2012 when I was invited to be filmmaker-in-residence for a month at the Klondike Institute of Art and Culture in Dawson City, Yukon, Canada. I photographed the environment and began animating snow, ice, braided rivers, spindly trees and crows. I layered images and experimented with using photos as long, horizontal backgrounds that I could pan under the animation. The views of this vast wilderness dotted with jagged white peaks, tiny black trees and lakes of turquoise ice were completely mesmerizing. I fell under the spell of the far north and this journey was a major influence on North of Blue.

After a month in the Yukon, I returned to my studio in Portland, Oregon and struggled to make sense of what I had created. I kept adding new animation and moving scenes around, but nothing worked and nothing coalesced. I finally abandoned the project. I returned to it months later and began by removing all the browns and greens and reducing the palette to blue, white and black. I deconstructed the animation by extracting small elements from semi-realistic scenes and combining them into new compositions. Suddenly it became an abstract film and I continued to pare down each scene to only lines and shapes, like simple blue balls and abstract totemic aggregations. 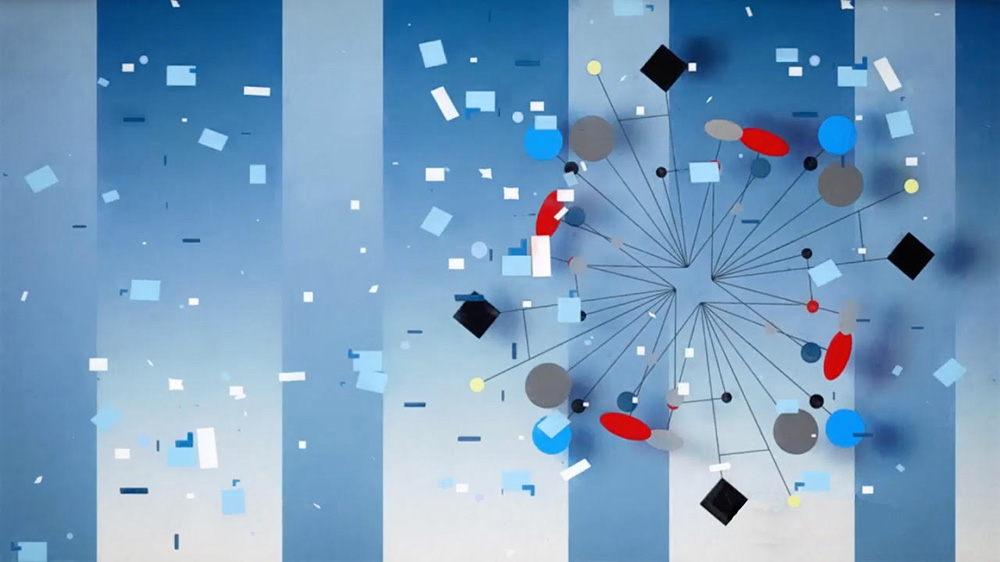 What prompted you to make an abstract animated feature?

I started experimenting with abstract animation in 1984, in the first computer animation class at CalArts, taught by Vibeke Sorensen. One of my graduation films, Jade Leaf, was the first computer film made there. I went on to make five more abstract short films and an abstract iOS app (Clam Bake). The app had the biggest influence on North of Blue because I found that the repetition of simple geometric shapes could surprise the player/viewer with increasingly strange metamorphoses. I used seven scenes of transforming blue balls as a repetitive anchor in North of Blue. The original title-in-progress was Blue Balls.

Discarding representation in my work has increased the joy level of my animation. When we see objects, we often subconsciously label them and that creates a familiarity that can shut down further visual and intellectual exploration. Abstract animation cannot be labelled and categorized by the brain. This puts off some people and they are not willing to look at it. If you’re willing to relax into North of Blue and just look, I think you will be surprised.

Which tools did you use to create the animation, and how long did it take to make?

North of Blue contains about 43,250 drawings and it took six years to make. I used Adobe Animate for the animation and drew everything by hand with a digital stylus on a medium sized Wacom tablet. After animation and editing were complete, digital artist Brian Kinkley used Synthetik Software’s Studio Artist 4.0 for the paint effects. Brian also designed and animated the title sequence. 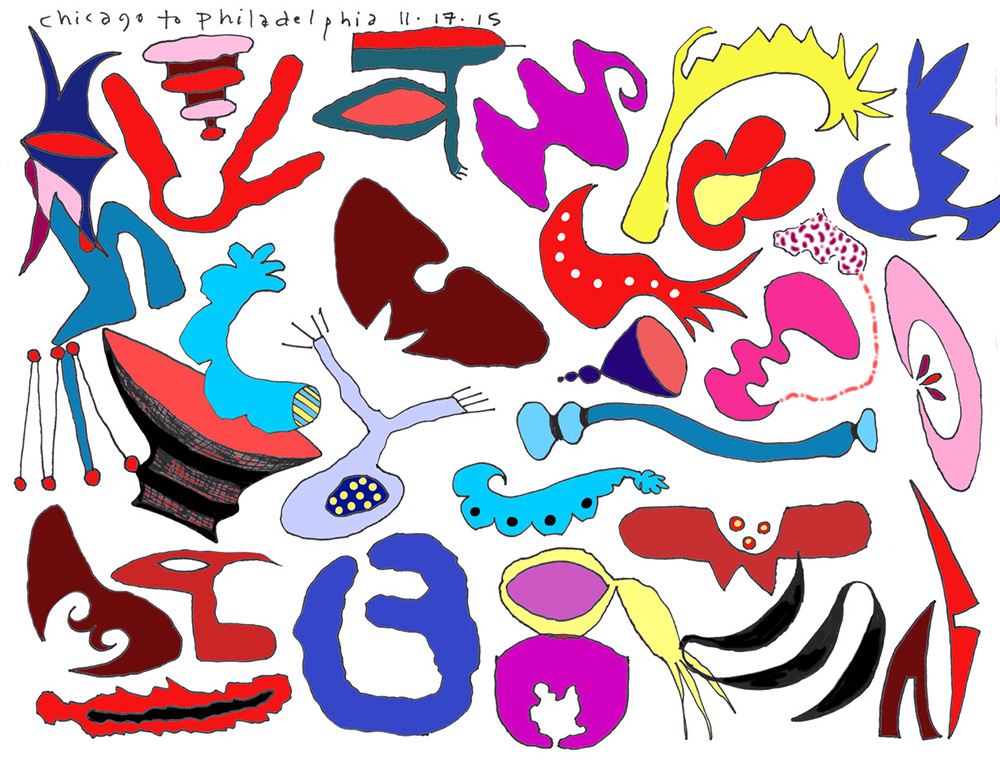 The first time I saw North of Blue on a huge screen with an excellent Dolby Surround sound system, at the Hollywood Theatre in Portland, I was shocked with how immersive the experience was. I had only seen the film on a small screen. A couple of sections put me in an altered state and after the show, many people told me that it was like a drug trip and that they experienced a trance state while watching it.

Can you address the design influences on North of Blue?

While working on North of Blue, I attended a lecture about Hilma af Klint, the Swedish abstract painter who lived from 1862 to 1944. She has been excluded from art history, and she was a new discovery for me. Af Klint made over 1,400 paintings and 26,000 drawings and she was the first abstract, non-Chinese painter, even though Google continues to attribute that title to Wassily Kandinsky and abstraction in Chinese painting goes back to the 12th century. I was profoundly inspired by af Klint’s large, colorful paintings and the mathematical and mystical elements of her compositions.

I was also influenced by several pioneer abstract animators. Mary Ellen Bute (1906 –1983, U.S.A.) directed and animated 14 films and developed an oscilloscope to use for drawing. Oskar Fischinger and Jules Engel (my mentor at CalArts) are two important abstract artists and friends who both worked on Disney’s Fantasia. Abstract painter Piet Mondrian (1872 – 1944, Holland) was a major influence on the palette and the compositional structure of several scenes in North of Blue, especially his work with black grids and primary colors. I also researched blue and white classical Delftware. 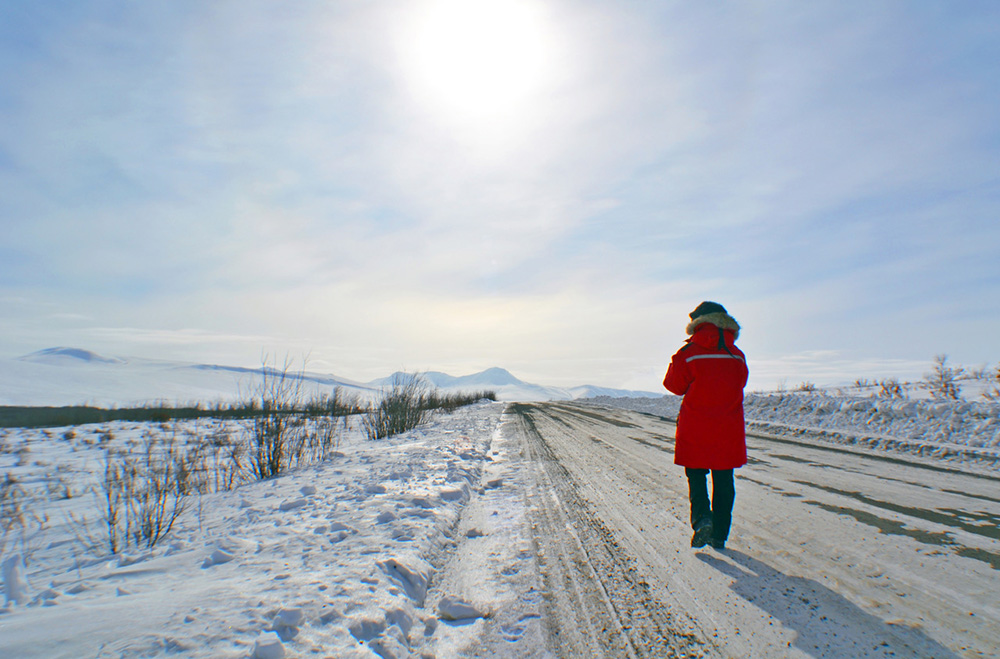 Music always plays an integral role in your work. Can you tell us a little bit about the music for North of Blue?

I was thrilled when composer Jamie Haggerty threw himself into this project. We worked together on three of my earlier films: Dew Line (2005), Relative Orbits (2004, documentary) and Utopia Parkway (1997). I had to wait for him to retire to work with him again. Jamie is a true Renaissance man: composer, sound designer, animator and editor. It took him 11 months to compose the music and complete the sound design for North of Blue, using Ableton Live and Pro Tools.

Most of the music was composed to picture and I truly loved everything Jamie came up with. Fragments of his music would become ear worms that played in my head for days — always a good sign. I animated four sections of the film to temp music by Seth Norman, and Jamie did a brilliant job of matching the rhythm and mood of those sections. Jamie also did the sound design, and Chris Barber assisted with wonderful sound effects. Jamie and I collaborated during the mix, but I had very minor input, occasionally asking if we could reduce layers and simplify an area to match the starkness of a scene. I like dubstep and I begged him to add big bass drops, which he wisely limited to two.

The budget was around $19,000. Most of that was for sound and compositing and it does not include my salary or studio rent. The expenses were spread over six years, so it was affordable. I paid $2,160 ($30/month for six years) to use Adobe Animate and Photoshop and, as Brian Kinkley says, we are all Adobe sharecroppers. 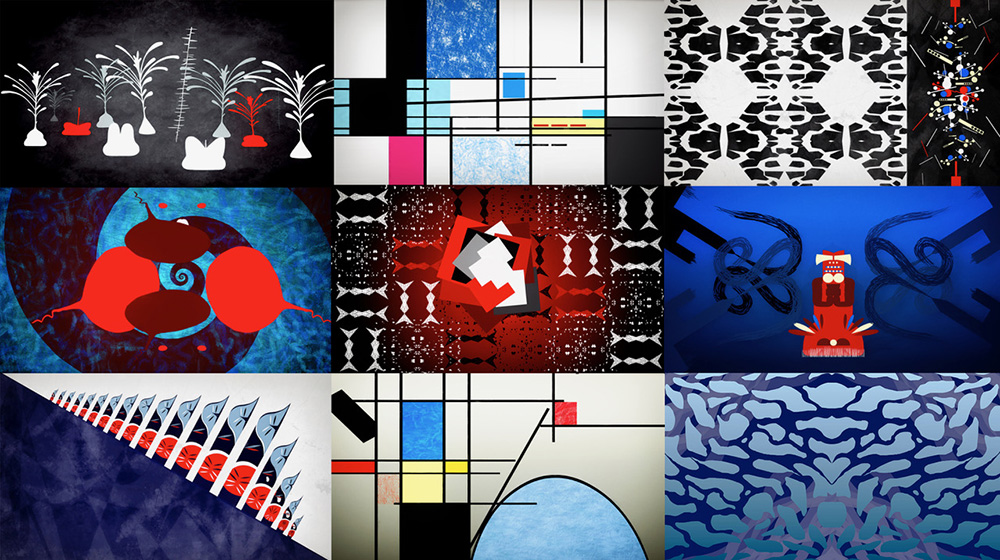 After making about 27 amazing animated shorts over the past three decades, how do you keep finding new inspirations to create your art?

Inspiration is not a problem for me because I am inspired by so many things. For All My Relations (1990), I spent a lot of time in the filthy, potholed street next to my studio, picking up trash to make frames for the animation. Those smashed screws and giant cigarette butts look interesting on screen. Nearly everything in Dawson City, Yukon was inspiring: people, plants, parkas, landscape, frozen rivers, birds, dog teams, weather, architecture, Dänojà Zho Cultural Centre, library display of children’s art, ice crystals in street puddles … Looking carefully when traveling is good for inspiration. I always carry a small sketchbook, make notes and drawings and take photos.

How is your methodology different for a long-format project?

Working on a short film is like a lovely hike in the woods. Working on North of Blue was like hiking the Pacific Crest Trail with side trips. It was a deeply joyful process and it felt like an extension of being under the spell of the far north. Every morning as I arrived at my studio, I had this delicious, expansive feeling of being in a vast, wild landscape, with all the time in the world to explore new territory and experiment with unfamiliar imagery. Intriguing challenges in design, composition and content emerged organically and many became new strands of inquiry that resulted in scenes that surprised me.

I usually do a storyboard for a short film, but I did not do one for North of Blue. As the film got longer, I made a large wall of images to organize all of the scenes. It contained a small island of images from tests and experiments that did not fit anywhere. I enjoyed working alone but was lucky to have four interns who worked with me for two months each and I was inspired by their energy and creativity. I have had amazing luck with interns who have found their way to my studio.

My longtime collaboration with brilliant digital effects artist Brian Kinkley was also a fun and energizing part of the process. Brian generated a lovely new look for the film. North of Blue required a long term commitment from my dear friends who did the sound and compositing. It is much easier to do a short film if you are free lance and working on other projects at the same time. 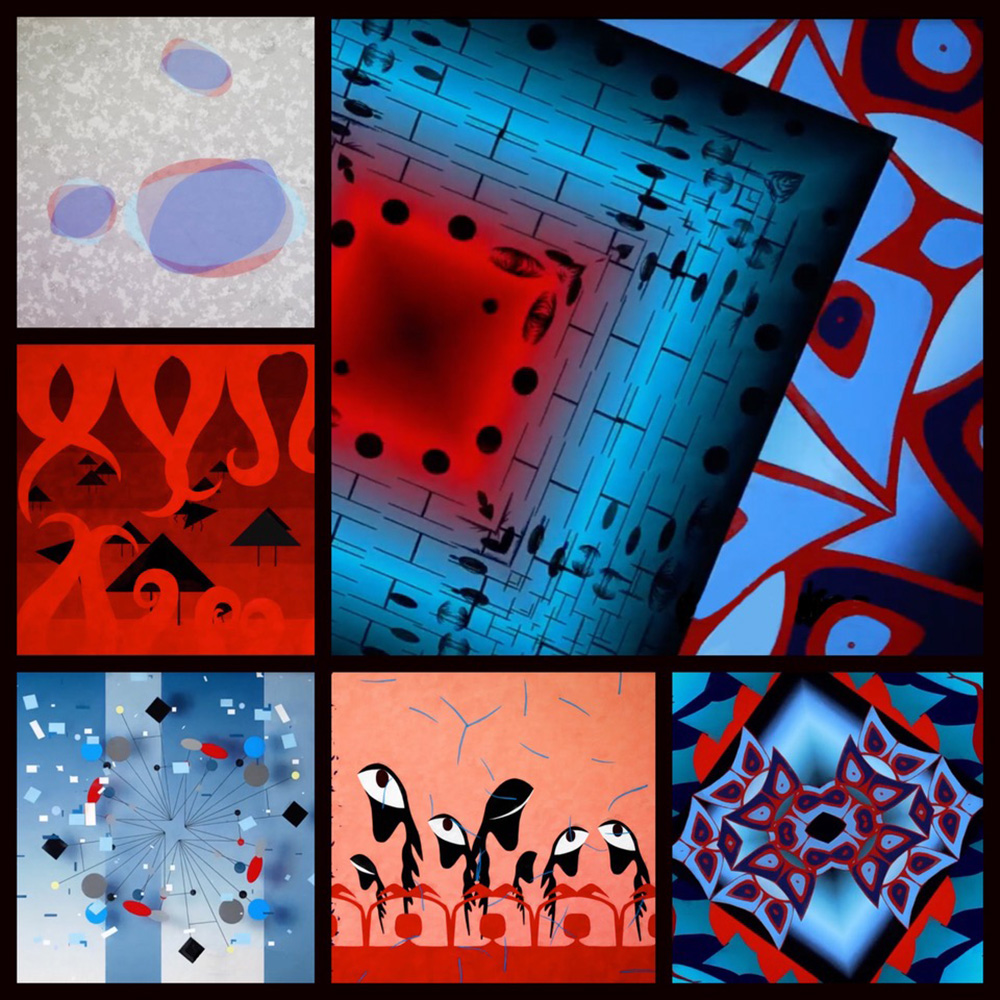 What is your take on the state of animation today?

It is very exciting that many women are making animated features. I absolutely loved The Breadwinner (2017) by Nora Twomey and Seder Masochism (2018) by Nina Paley.

What is your go-to advice for people who want to make personal animated art — rather than work in studio factories?

The most interesting animated films are by individual artists and their work inspires the animation and advertising industries. Go online (or to film festivals) and look at lots of films by PEZ, Regina Pessoa, Michaela Pavlatova, Nina Paley, Chintis Lundgren, Steven Subotnick, Joan Gratz, BLU, Konstantin Bronzit, Janet Perlman, Marv Newland, Candy Kugel, Alison Snowden & David Fine and Wendy Tilby & Amanda Forbis. Then make a personal film about something that you are passionate about. Enter and go to lots of film festivals. The best ones are free to enter. Set up your own screenings at nightclubs, bars and art galleries if you don’t get into film festivals. Keep in mind that making a film can jump start your commercial animation career but it won’t make money, so keep your day job. Don’t get discouraged and keep making films.

How about some tips for surviving the coming apocalypse/ World War Three?

It is important to be as creative as possible, especially in the face of despair over the failure of humanity and possible demise of the human race. Finding joy and nourishment in creative expression and making things is essential and sharing your work can inspire many other people. I immerse myself in creativity by going to see friend’s shows, visiting lots of art and science museums and watching theater, movies and media. My husband, Paul Harrod, was production designer of Isle of Dogs for two years, and it gave me the opportunity to spend months in London visiting their wonderful museums (faves: Tate Modern, Victoria and Albert Museum, Sir John Soane’s Museum, Dulwich Picture Gallery and Barbican Art Gallery). Paul’s long absence gave me extra time to finish North of Blue, but I deeply missed having my best critic around.

How would you describe North of Blue to someone in order to make them want to see it really badly?

Stretch your head by diving into a lush, color-crazed, immersive, relaxing abstract feature. It will rock your world and lower your blood pressure!

You may also like...
Related Topics:featured, Joanna Priestley, North of Blue