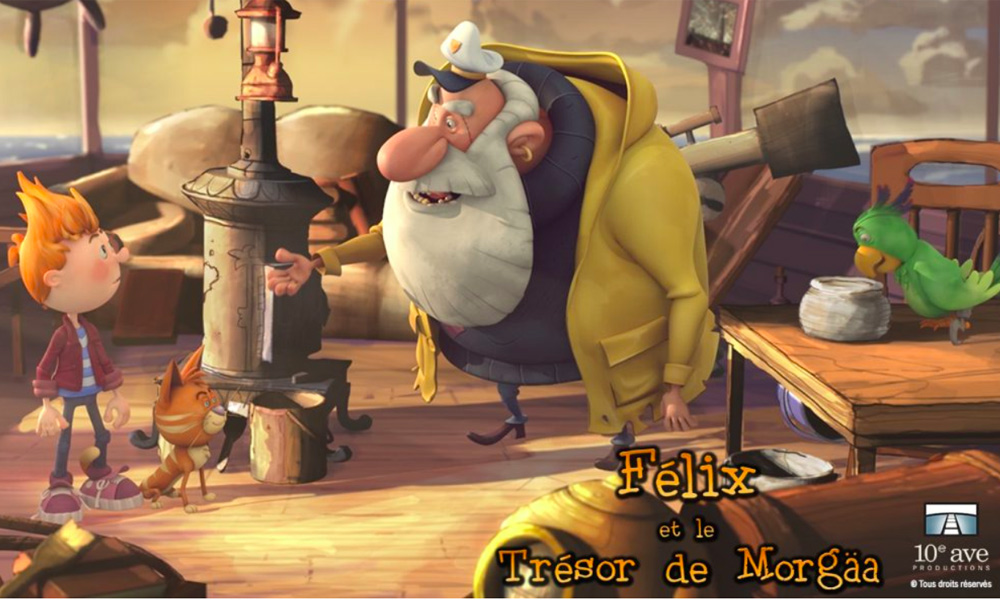 Felix and the Treasure of Morgäa

Quebec-based studio 10th Ave. Productions has begun work on its fourth animated feature. The new CG-animated feature is titled Felix and the Treasure of Morgäa, and will be directed by Nicola Lemay(No Fish Where to Go) from a script by Marc Robitaille (Winter Stories), with art direction by Philippe Arseneau Bussières (Mission Kathmandu: The Adventures of Nelly and Simon Snowtime!, The Legend of Sarila). The release date is late 2020/early 2021.

The movie centers on 12-year-old Felix who is convinced that his father, who went missing at sea two years ago, is still alive. Accompanied by a retired sailor, his thieving one-legged parrot and a cat who acts like a dog, Felix sets out to find his lost father. Their journey leads them to Darkshadow. Island, where they discover a secret underground city ruled by the evil Morgaa, who keeps an incredible treasure.

The studio, which celebrates its 20th anniversary this year, is based in in Saint-Augustin-de-Desmaures, Quebec. For the project, the company has established a production unit on the Grande Allée in Quebec City. Over the next few years, the CG animation team will concentrate its efforts on this new offering.

“The first wave of creators has already been on the job for a few days,” says producer Nancy Florence Savard. “These are the department heads who are working to create the film’s characters. A second wave of hirings will take place after the holidays. We anticipate having a team of about 15 people in the studio, dedicating themselves to the film. A search is underway to find several animators, a few modelers and some rigging artists. Those who are interested can apply to talent@10ave.com.”