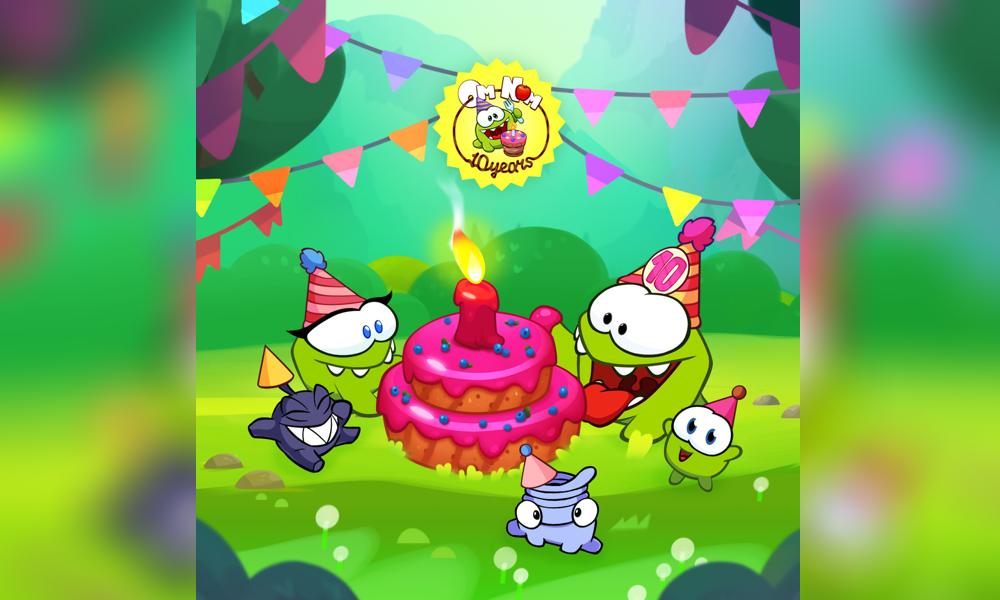 ZeptoLab is inviting fans to join the anniversary celebrations for the 10th birthday of the adorable, emotive and world-renowned Om Nom, who first appeared in the popular puzzle game Cut the Rope in October 2010.

Cut the Rope has amassed 1.6 billion installs to date, as the cute green monster with a toothy grin won the hearts and took the fancy of fans all over the world over the years. Zeptolab was soon inundated with requests for a backstory. Always looking for more fun stuff to create, the studio decided to oblige the fans with a series of short cartoons featuring Om Nom. The initial 30 x 1’30” episodes first appeared in the games and the official YouTube channel. The funny and original adventures soon attracted even more fans as well as the interest of TV and VOD channels. Episode after episode and season after season ever since, viewers have been able to explore this world through Om Nom Stories.

Om Nom Stories is now on its 17th season with seven hours of original content distributed in eight regions, on 86 YouTube channels, 12 TV channels and 40 VOD channels, with notable regional partners in Latin America, Russia, China, Europe, Australia and too many other regions and countries to mention. Worldwide, the series have been watched more than 20 billion times including over 5 billion times in China. These backstory shorts have turned into a story of their own!

People around the world found they could relate to these non-dialog animated adventures. Om Nom is a charming, kind and brave monster that sincerely believes that a kind heart and a passion to help those in need can make this world better. He truly is a friend that everyone wants to have, the one that attracts adventures like a magnet and turns every challenge into a fun game.

More than 7 million fans follow Om Nom on social media. To satisfy fans’ requests, ZeptoLab and partners produce and distribute a wide range of merchandise, toys, books and audiobooks. Over 10 years, there have been numerous successful collaborations with partners such as McDonald’s, Burger King, Mattel, Hasbro, Bershka, Vivid and others.

Om Nom has been keeping busy in games as well! Two new titles, Om Nom Merge and Om Nom Run, appeared on all major platforms in 2019 and 2020, with ongoing plans to release several new games each & every year. In addition to this, ZeptoLab is keen to explore other formats and sides of Om Nom in a spin-off series. Plenty more new and exciting ways to have fun with Om Nom are right around the corner, so stay tuned!