The Walk, Robert Zemeckis’ feature film chronicling performer Philippe Petit’s amazing high-wire walk between the towers of New York’s World Trade Center, is a stunning tale both in its storytelling and also its amazing VFX achievements.

“The cool thing about being a VFX producer is, if it’s done right, you get to be part of it from the very beginning to the very end,” said Cellucci. No stranger to the world of VFX, the Emmy-award winning producer possesses over 20 years of experience, having worked on films like Salt, The Green Hornet and Titanic.

For Rudy Grossman, whose CG supervisor credits include season five of Game of Thrones and Maleficent, The Walk held special significance.

“Back in my college days in NYC I was a street performer. A few years later, we were doing a test at ImageMovers,” said Grossman, speaking about Zemeckis’ former company. “Later on when the project was moving forward I came back to California and joined the project. As a New Yorker, as a street performer and as an artist this project was such a pleasure to be a part of.”

One of the main challenges of creating the film proved to be the budget. “We were trying to make a Pixar film on an independent studio budget,” said Cellucci. In order to create the over 800 VFX shots on a budget of roughly 35 million dollars, the team turned to the cloud.

“For The Walk we used a tool called Conductor,” said Grossman. “Normally, a VFX studio has a team of artists and a renderfarm. The downside to a room of computers is that it becomes deadweight.” This, explained Grossman, is because when the renderfarm is not in use the room cannot be used for anything else and it is expensive to maintain when no films are in production. “The solution,” he said, “is to send it to the cloud.”

Conductor allowed the team to only pay for rendering when the program was in use, allowing the production to save millions of dollars. This technology can be a boon for smaller studios with smaller budgets, said Cellucci, while still enabling them to create Hollywood-level films.

“9.1 million core hours of processing were completed in the cloud,” said Grossman. “This would have taken 1,000 years on one processor.”

Stereoscopic supervisor of The Walk Jared Sandrew, whose supervisory credits also include Jupiter Ascending, The Amazing Spider-Man and Hugo, explained the technical wizardry that the team achieved in order to create realistic special effects.

The effects teams scanned lead actor Joseph Gordon-Levitt’s body and face in order to create rigs, digital skin and animated models.They then replaced the real Gordon-Levitt with animated versions of him in order to simulate him walking on a tightrope during scenes in the film.

“Digital humans bother people,” explained Sandrew, referring to the undesirable effect known as the Uncanny Valley. “The fact that no one noticed was great.”

The Walk team also used longer shots, wide angle lenses and a variety of oblique angles in order to give the film a richer sense of story and texture.

“[Zemeckis] wanted it to be super awesome 3D the whole time,” explained Sandrew. “He didn’t want it to be flat 3D and then the tower.”

The painstaking and thought out processes reveal themselves on screen, both during the harrowing moments when Gordon-Levitt crosses between the twin towers on tightrope and in quieter scenes.

“It’s truly one of the best films I’ve ever worked on,” said Cellucci. “The team worked really well together and it shows.” 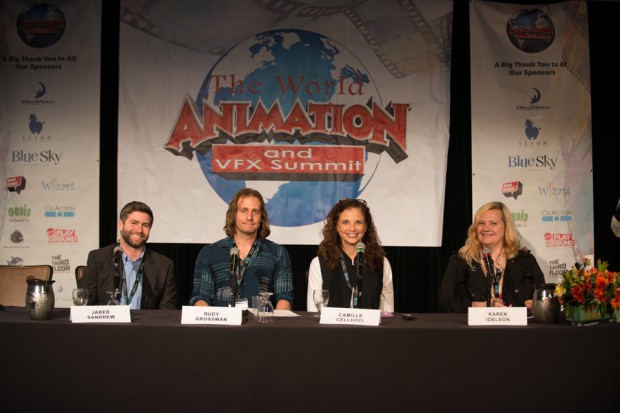 Delivering the VFX of The Walk