This fall, Blue Sky Studios, the creators of the Ice Age films, Epic and Robots, will bring Charles Schulz’s beloved Peanuts strip to 3D animated life with The Peanuts Movie.

Tom McLean, editor of Animation Magazine, led a panel with supervising animators Nick Bruno and Scott Carroll on the first day of the World Animation and VFX Summit to discuss the inner workings of bringing a 2D comic strip into the digital age.

“This is the first movie I ever worked on where my own father called up and said, ‘Don’t screw this up,'” joked Bruno.

The Blue Sky team encountered and solved multiple creative challenges in order to translate the strip into a 3D animated feature.

One of the first challenges they faced was choosing the proper character design for Snoopy and the gang. At first glance, the iconic characters appeared to be easily recognizable, but the team had to work with several decades of varying character designs created by Schulz, lovingly referred to as “Sparky” by his family, friends and legions of dedicated fans.

“We had to find the most appealing version of the characters,” said Carroll. “What was the golden era that Sparky drew?”

After consulting with Schulz’s friends and family, the Blue Sky teamed discovered that the creator was partial to the characters drawn in the 1980s and 1990s. “As an artist he always felt like that was his best work,” said Bruno.

The team created a “Snoopy Matrix” — a massive chart filled with thousands of versions of Snoopy, analyzing every aspect of his design to find the most appealing version of him, creating him piece by piece. By doing this they were able to create their “Hero Snoopy” as Bruno called him, and used this same matrix to create the other characters featured in the film.

The animation and design teams also had to master the various styles in which Schulz designed the characters. For example, often in the strips the characters’ hands would lose and gain fingers, going from three to four to five depending on the pose.

“These characters weren’t designed for animation,” said Bruno, and as such, did not conform to traditional turnarounds. Often Schulz would draw a character’s face in profile with two eyes, creating what the animators termed “The Picasso Challenge.” In order to keep Schulz’s style the animators created animation “cheats,” for example stretching limbs, creating special rigs for the hands so that fingers could suck in and out to give the three, four and five finger look and only using certain poses to maintain the classic Schulz style.

And in order to stay faithful to the style and animation of the Peanuts characters, the Blue Sky team created the “Van Pelt University,” named after Lucy Van Pelt, one of Schulz’s mainstay characters.

“The reason why we picked her was because she tells everyone what to do, so it seemed appropriate,” laughed Bruno. During the three-week boot camp, animators learned how to draw the characters, the style of the characters as done by Schulz in his strips and how to animate the characters using detailed model sheets. At the end of the training the animators were able to produce animation tests that showcased their ability to create believable 3D acting in the Schulz style.

The team also watched documentaries and listened to audio tapes between Schulz and Bill Melendez, who helped create the 2D animated Peanuts specials. In this way they were able to learn not only about the strips but about the men who helped first bring the strips to the screen.

One of the most challenging aspect for the animators, and one of the primary aims of Van Pelt University, was to show the animators how to animate on twos. For a typical 3D animated film, animation is 24 frames per second and is done on ones. The classic Peanuts cartoons, however, due to television budget constraints and the limited time frame in which they needed to be produced, was done on twos. This created a playback that was not as smooth as theatrical animation, however it gave the specials a quality that is now considered classic by fans.

In order to maintain this classic look and feel, the Blue Sky animation team also animated on twos, something that computer animation programs are not designed to do. So instead of the animators creating the key frames and the computer creating the inbetweens, the animators animated every frame, much like 2D animators did in the past.

“Remember all the stuff you’ve learned over your professional career? OK forget it,” said Carroll.

Although this method took more time and meant that new rigs and programs needed to be created, the animation team knew it would be worth it.

“Everybody has a personal attachment to the film. We just wanted to be super faithful, and that means no compromises at all,” said Bruno.

In the end, the dedication and commitment to staying true to Schulz’s style while also using all the technological tools at their disposable, and melding that with an engaging story, enabled the creators at Blue Sky to bring the beloved characters into the lives of a new generation.

Bruno and the team hope that their film will deliver the same sense of wonder that the original Peanuts specials and strips brought to their lives years ago. “There was a lot of pressure. You can only hope people respond to it the same way,” said Bruno. 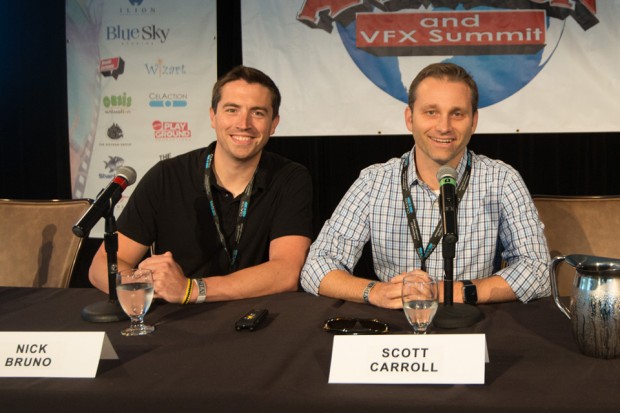