2015 proved to be a banner year in the world of animated features, and the Oscar Contenders gathered at the World Animation and VFX Summit to discuss the artistry of creating beloved films.

Since each film represented at the panel was based on a preexisting property, the participants spoke to how the bar was raised to create something that paid respect to the original material while also allowing for a fresh take and creativity on screen.

For Tim Johnson, director of Home, the journey began when he read Adam Rex’s The True Meaning of Smekday to his children at bedtime. Johnson finished the entire story in one night. “I emailed Jeffrey Katzenberg at 2:07 am,” he said, and told him that he had DreamWorks’ next movie. The story struck a chord within Johnson. “It seemed to take us to task as human beings and allowed a fun house mirror view of humans,” he said.

For Steve Martino, the chance to direct The Peanuts Movie was “a huge honor,” he said. “The opportunity is to share these characters that Charles Schulz created with a new generation.”

For Richard Starzak, the challenge lay in taking Shaun the Sheep and his amusing cohorts from the television screen and broadening their world  and adventures to the silver screen. “It’s quite difficult and imposing because the characters already exist,” he said.

The Aardman team did not want to change the look or dialog-free storytelling of the television show for film, since that was what gave the show its charm among its legion of fans. Instead, they expanded the relationships between the characters, developing it like a family. “We developed the relationship between father and son that goes wrong. It sounds a bit heavy for Shaun the Sheep but we took it seriously,” said Starzak.

The journey to transform Anomalisa from a play by Charlie Kaufman to a film began in 2005, when Duke Johnson, a director and junior partner at Starburns Industries, saw the play in 2005. For the next seven years he sought the rights to the play, acquiring it in 2012.

Rosa Tran, the film’s producer, remembers how enthralled she was when she first read the script. “It took me at least a week to process it,” she said. She immediately agreed to produce it and the team spent three years crafting the stop motion film.

Ultimately, the true test for all was whether their film could not only measure up to the source material, but also engage filmgoers in a new and exciting way.

“It’s about honoring our characters and the challenge of being true to them and ourselves,” said Johnson.

“It was about having an experience that’s heartfelt,” concurred Martino.

And once the film finishes, the next step is the whirlwind media tour in order to showcase the film to potential audiences around the world.

“Suddenly, instead of directing the animation, you’re the animated person,” laughed Johnson.

Now that the films are in the Oscar race, the question arises — as it does every year since the dedicated best animated feature category was established — as to whether there’s a possibility of any being nominated for best picture. Several of the panelists agreed that the best picture category should be open to animation.

“It should be considered for best picture,” said Tran of animated films. “It’s a tool that we’re using to tell a story.” 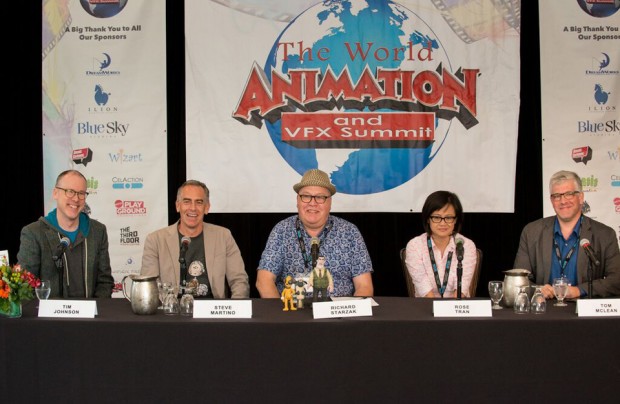