Animation veteran Chuck Williams, president of Marza Animation Planet USA and former Disney Animation producer, is no stranger to the art of storytelling. Having worked in the animation industry for 26 years, 21 of them at Disney — starting as an editor and writer and working up to producer on movies such as Brother Bear — he witnessed the process of pitching, developing and creating feature films from conception to completion.

As part of the development team at both Disney and Marza, Williams offered his expertise on how to create a compelling animated feature film on par with Disney and Pixar, but on a smaller budget, during a master class held at the World Animation and VFX Summit.

The first question he posed to the audience was the most important for any filmmaker.

This, he said, unites all people all over the world. “It’s why we’re on earth, to experience life and live it vicariously through other people,” he said.

He outlined the steps needed to create such a classic, from idea to development, preproduction to production and finally post-production. And the biggest cost, he said, was production.

“When you go into production you are burning the big dollars,” he said. The key to keeping costs down is to figure out story problems during the preproduction stage, rather than moving ahead and then scrambling to fix the story during production.

He recommended that the director, writers, storyboard artists and editors work together during the development process. At Disney, Pixar and Marza, he said, the writers write the feature animated screenplay in the same way as a live-action screenplay. They then outline the story on notecards, and the artists include character designs and other visuals, and pin them on giant boards in the story room. This way directors, writers and artists can see the entire scope of the film from beginning to end.

“When something lands, you stick it on that wall and now we’re all looking at the same thing,” he said. “We will re-card, breaking the film, carding the film six [or] seven times before we have the final script. We pitch and we see what works.”

Once the script and boards are hashed out, the editorial team creates story reels; animatics of the storyboards complete with sound effects, scratch dialogue (often recorded by studio employees), and scratch music pulled from other feature films in order to create a mood. The reel is then screened, warts and all, to the director, writers, story artists, executives, anyone that they can get into the room, in order to see what works and what falls flat.

The advantage to creating story reels as soon as possible, says Williams, is that it enables you to see what’s working and what stinks. “The story’s not going to work the first time,” said Williams. Case in point he said, were the first screenings of some of Pixar’s now classic films, which Williams saw when he worked at Disney. “The first screenings of Toy Story 3 and Up were bad,” he said. “But [we] knew from the beginning that’s where you start.”

Fail fast, fail often, he said, was a mantra he learned from director Andrew Stanton and a policy that all studios should adopt as their second rule of filmmaking. At Marza, he said, they try to get their first screening five months into pre-production. They then make changes, and show the story reels at least two more times before moving the film into production.

“You’re putting the movie up, seeing what’s wrong and putting it up again,” said Williams. The third rule, he says, is that open, candid dialogue should be encouraged. He credits Walt Disney Animation and Pixar President Ed Catmull and his book Creativity, Inc., and his own personal experiences with John Lasseter, CCO of Walt Disney Animation and Pixar, and other Disney and Pixar executives with encouraging filmmakers to not only screen the entire film early on but accept notes, even difficult notes, from the audience.

The notes, he said, can be simple. “Ask what you feel. What you’re looking for in notes is frequency,” he said. For example, in the movie Aladdin, if ten people all brought in notes about Jafar, the director and artists should explore what is happening with Jafar.”

He also recommended that producers and directors bring in different groups of people for each screening. “Keep the audience fresh. After screening two or three, they are burned out. The first time it’s funny, second time it’s amusing, third time they’re bored,” he said.

Of course, even when there are multiple screenings and notes, it can be difficult for people, especially directors and producers, to work well together and with their crews. Williams stressed the importance of laying one’s ego on the table for the good of the show.

“I find that when we create something it’s like a child, and when the child is criticized it’s really personal. Your kid’s really stupid. It doesn’t work in act three,” he said. “You feel like the critique of the movie is a critique of you and it’s not. Treat the patient. The patient is your movie.”

Having a film that is executive led, rather than creator led, can pose problems, as can a director without a clear vision who is non-communicative with his or her crew.

“Everybody is looking to you. You have to make a thousand decisions a day. It’s easy to get your ego into it and shut down,” said Williams. “As a producer, you have to have courage and feed the director’s ego and patience and keep him open and pliable and not locked in. If it’s not led by a creator or if the director shuts down, those are the two red flags I’ve looked for.”

This process of bringing in a director with a vision, creating an atmosphere of communication, creating the film with boards and a script, getting it wrong quickly, and screening it multiple times before production, will save money in the long run, said Williams. This is especially true for smaller studios and co-productions that are working on a budget closer to $25 million, rather than a $200 million budget.

And as a cautionary tale, Williams discussed Robodog, the film that was almost Marza’s first animated feature, and the processes that led it to being put back on the shelf. The first day he arrived at the studio, Williams watched the first screening of Robodog. And while it was not great, like every first screening of every animated film, the main problem was that the film had already gone into production six months prior.

“Now you’re trapped,” he said. “You’re spending production dollars on stuff that you’re building and the story’s not working and they know the story is not working.”

The Marza team worked to fix the film, but by the third screening realized it would be better to put the project on hold. That experience encouraged Williams to share his expertise with other up and coming studios and studio executives and creatives so that they could avoid the same mistakes.

“These stories have to be cornered. It’s in the room somewhere. It’s elusive,” said Williams. “You have to track it down in the corner and pin it down. It’s not just handed to you.” 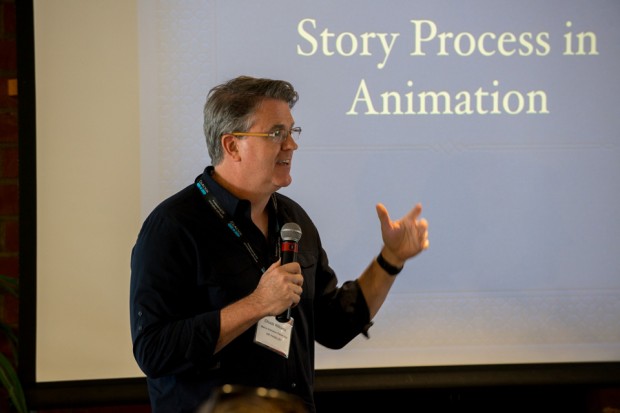 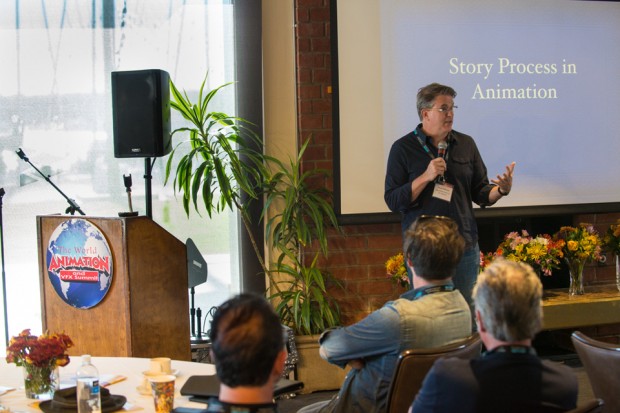 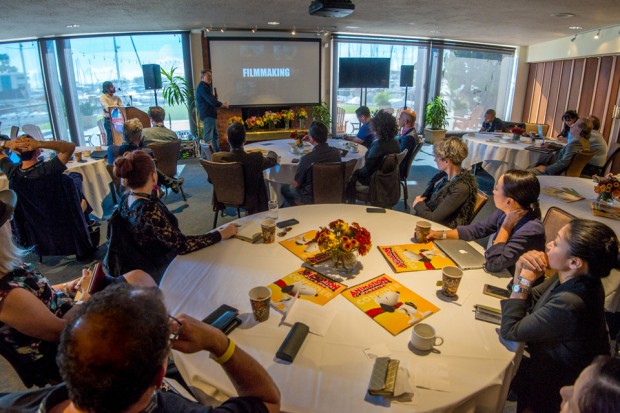 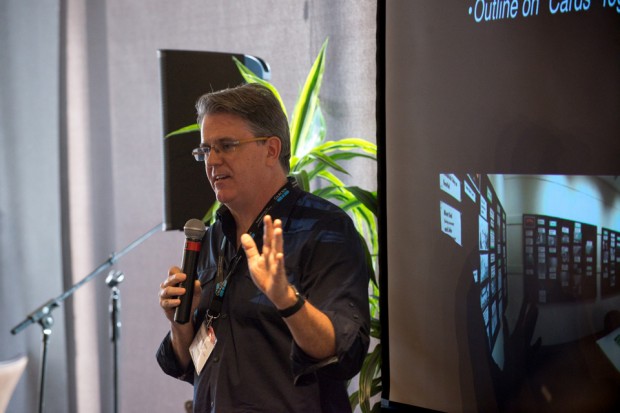 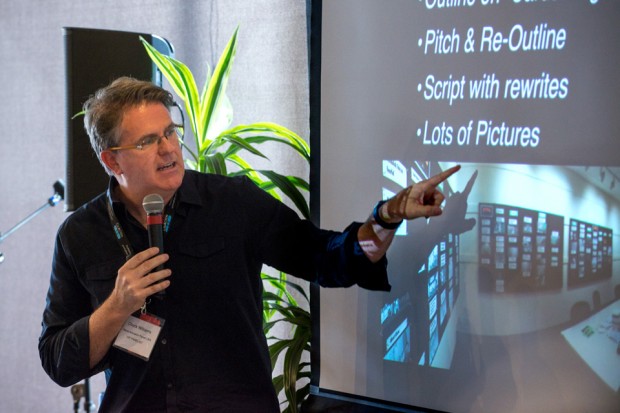 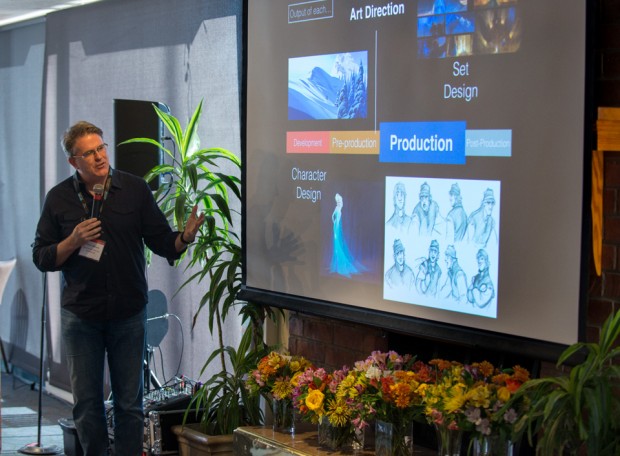