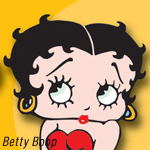 The hometown of the animator behind the iconic character Betty Boop is throwing another party in her honor.

The town of Wisconsin Rapids, Wis., is playing host to the second annual Betty Boop Festival from July 28-31.

The first festival attracted more than 4,000 attendees. Surveys for the Wisconsin Department of Tourism showed that visitors came from more than ten states and two foreign countries to attend Betty Boop Fest. Organizers have added new activities and events and hope to attract even more people in 2011.

Among the planned events:

Details can be found on the festival’s web site, www.BettyBoopFest.com.

Natwick is best known as top animator for Fleischer Studios’ popular Betty Boop™ in 1930-31. Also, while working there in 1939, Natwick was in charge of drawing the Prince and the Princess for Gulliver’s Travels, as well as helping to animate Popeye the Sailor Man.

During his 100-year-long life, Natwick worked for a number of other American animation studios, including the Ub Iwerks, Walt Disney, Walter Lantz, UPA, and Richard Williams. He was the lead animator on Snow White & the Seven Dwarfs movie for Disney and helped animate Mickey Mouse in Fantasia. Snow White & the Seven Dwarfs is significant in animation history because it was the first full length animated movie ever made. Natwick also worked on Mr. Magoo and many other cartoon greats of the 1940s and ‘50s. Natwick died in Los Angeles on Oct. 7, 1990, just after having a 100th birthday party with friends.