We have five pairs of tickets to give away for the special Sony Pictures Animation’s 10th Anniversary screening of the movie Surf’s Up at the historic Ray Harryhausen theater (on the Sony lot in Culver City, Calif.) on Thursday, Sept. 13. The evening will include a panel with directors Ash Brown and Chris Buck, producer Chris Jenkins, vfx supervisor Rob Bredow and vfx artist Armand Serrano, moderated by animation historian Charles Solomon.

All you have to do to win the tickets is be one of the first five people to email ramin@animationmagazine.net with the subject line “Surf’s Up Screening.” Winners also get free copies of the beautiful Art of Surf’s Up hardcover book. Refreshments will be served at 7 p.m. Screening will begin at 7:30 p.m., and panel follows immediately after the pic.

The screening is part of Sony Pictures Animation’s month-long 10th anniversary celebration, which will also include Cloudy with a Chance of Meatballs (September 20), The Smurfs (September 27) and Genndy Tartakovsky’s Hotel Transylvania (September 29). Check www.animationmagazine.net every week to win tickets to each one of the upcoming screenings. 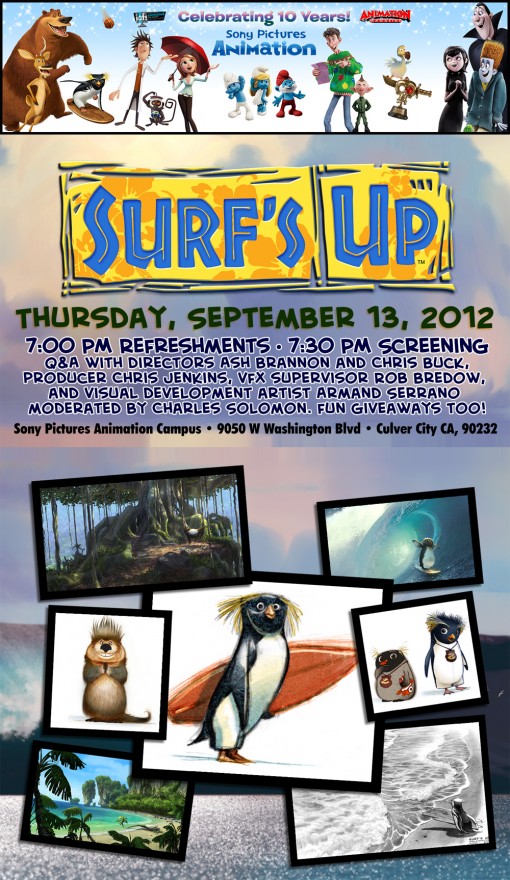