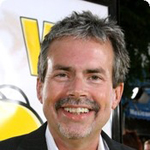 Mike Scully, a veteran  TV writer who has worked on The Simpsons since 1993, receives tonight the 13th annual Animation Writing Award for lifetime achievement from the WGA West Animation Writers’ Caucus.

In addition to 17 seasons on The Simpsons and co-writing The Simpsons Movie, Scully has extensive live-action TV comedy credits on series such as Parks and Recreation, Everybody Loves Raymond, Complete Savages and The Pitts.

Others who have received the award include Al Jean, Brad Bird, Michael Reiss, Linda Woolverton and Stan Berkowitz.

Los Angeles – Veteran animation and television writer Mike Scully has been named the recipient of the Writers Guild of America, West Animation Writers Caucus’ 13th annual Animation Writing Award, recognizing his prolific career and outstanding contributions to the craft of film and television animation writing, as well as his efforts to organize animation writers on behalf of the Writers Guild.

The AWC’s lifetime achievement award will be presented to Scully tonight at the AWC’s annual awards ceremony held at WGAW headquarters in Los Angeles.

“Whether penning episodes of The Simpsons, one of the most acclaimed, influential, and long-running series in TV history, or playing a key role in organizing the field of animation writing on behalf of the Guild, Mike’s contributions to both the craft and business of animation writing make him more than deserving of this award,” commented WGAW President John Wells.

“Mike Scully, now in his 17th season on The Simpsons, has amused, entertained, and inspired not only uncounted millions around the world, but uncounted numbers of animation writers. His high quality of writing is something we all aspire to,” said AWC Chair Craig Miller.

The WGAW’s AWC Animation Writing Award is given to members of the Animation Writers Caucus or Writers Guild who have advanced the literature of animation in film and/or television through the years and made outstanding contributions to the profession of the animation writer. Founded in 1994, the WGAW’s Animation Writers Caucus represents over 600 animation writers and works to advance economic and creative conditions in the field. Through organizing efforts, educational events, and networking opportunities, the AWC is a leading proponent for animation writers. Recent AWC Writing Award honorees include Al Jean, Brad Bird, Michael Reiss, Linda Woolverton, and the AWC’s 2009 recipient, Stan Berkowitz.

Continue Reading
You may also like...
Related Topics:Awards, Mike Scully, The Simpsons, WGA