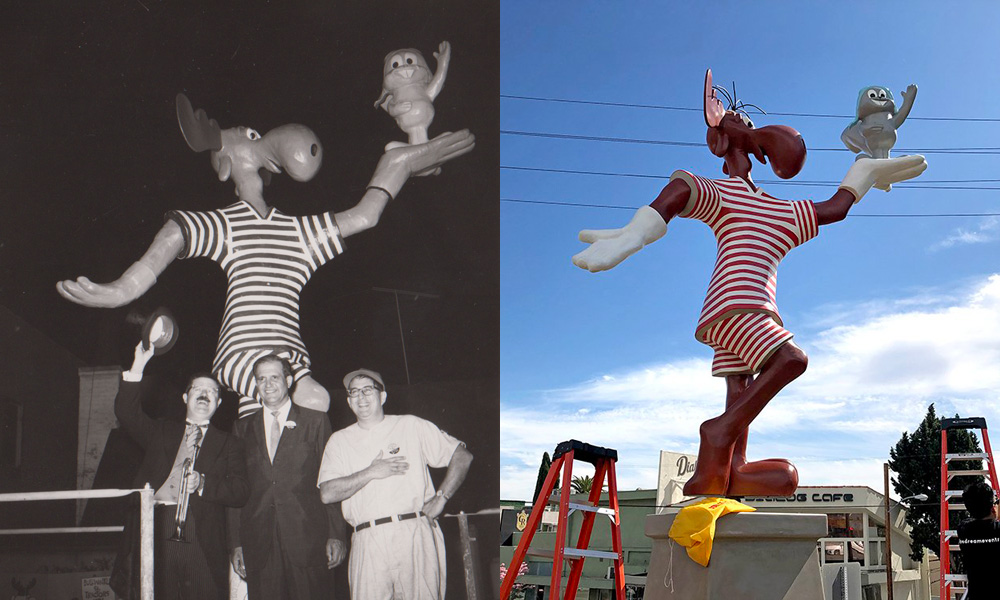 Pictured: Writer/producer and voice of Bullwinkle Bill Scott, LA County sheriff Peter Pitchess and series creator Jay Ward unveiled the original statue in 1961. The restored piece, photographed by Dan Mryglot for WeHo Times, will be officially uncovered at the end of March.

A 14-foot fiberglass statue depicting the iconic Jay Ward Productions characters Rocky the flying squirrel and Bullwinkle the moose has been reinstalled on the Sunset Strip after a lengthy sabbatical. An official unveiling is planned for the end of March, date TBD.

Originally erected in 1961 (with glamorous movie star Jayne Mansfield pulling the ribbon at the big reveal), the work by an unidentified artist was a popular attraction in the West Hollywood neighborhood until it was abruptly removed for restoration in July 2013.

Designed to parody a spinning billboard pinup across the street, the oversized Bullwinkle and Rocky outside the Jay Ward offices originally rotated as well — and the moose’s outfit was repainted to match the bikini on the Sahara Casino ad’s model when necessary. The cartoon duo were skirted by cement discs with the signatures and elbow prints of the show’s writers, mimicking the famous attraction at Grauman’s Chinese Theater.

The restoration project was undertaken by artist Ric Scozzari, and the refreshed statue was revealed in October 2014 in the atrium of the Paley Center for New Media in Beverly Hills for the Jay Ward Legacy Exhibit. Rocky & Bullwinkle then made an appearance at West Hollywood City Hall before going into storage until this weekend.

Funding for the restoration was provided by 20th Century Fox and DreamWorks, and the work was donated by the family of the late Jay Ward to the City of West Hollywood’s Urban Art Collection.

The original cartoon has inspired a multitude of comics, games, movie adaptations both live-action and animated, and in 2018 an Emmy-nominated series reboot from DreamWorks Animation for Amazon Prime, The Adventures of Rocky and Bullwinkle.