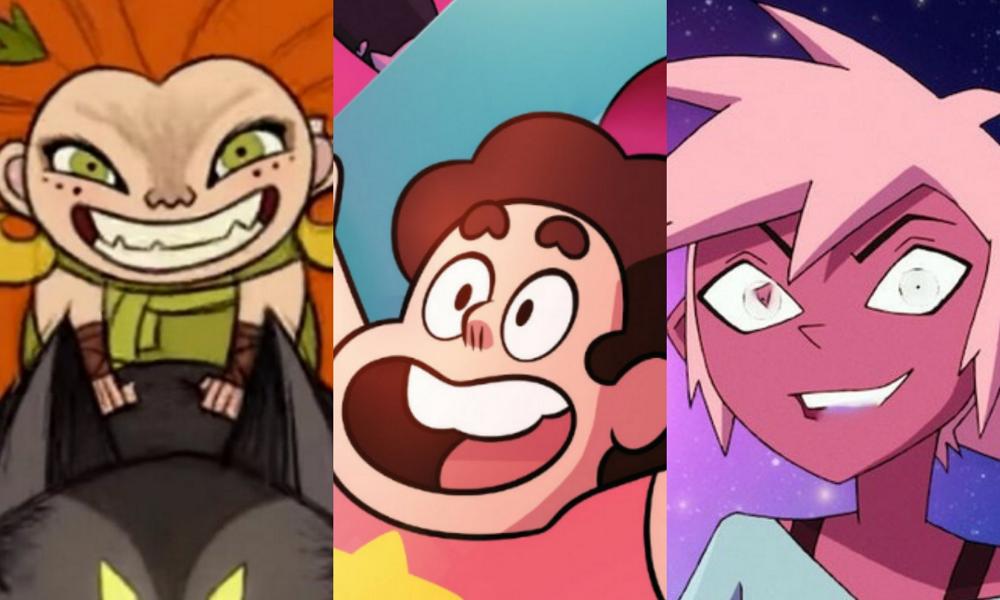 This year’s virtual New York Comic Con and MCM Comic Con have unveiled their amazing lineup for the digital confab which takes place Oct. 8-11 on the New York Comic Con YouTube channel. The rich line up features lots of exclusive panels about the making of our favorite animated shows and features including a look at the Apple film Wolfwalkers, an interview with Steven Universe creator Rebecca Sugar, a panel featuring the creative team behind CBS All Access’ new series Star Trek: Lower Decks, a look at the writers’ room of Colin Trevorrow and Scott Kreamer’s Jurassic World: Camp Cretaceous, a special roundtable with the team behind Seis Manos, and a look back at the making of the hugely influential show X-Men: The Animated Series:

Here are some of the animation and fantasy/vfx-related sessions:

Inside the World of Wolfwalkers from Apple TV+
Join directors Tomm Moore and Ross Stewart for a deeper look at Wolfwalkers, a new Apple Original Film. Alongside Cartoon Saloon’s Maria Pareja (production designer), Sandra Andersen (character designer), and Mark Mullery (assistant director), they’ll offer insights into the creative process and answer questions directly from fans. From Cartoon Saloon, the Oscar-nominated animation studio behind The Secret of Kells and co-produced with Mélusine Productions, comes a magical tale of an unlikely friendship between two girls in 17th-century Ireland. A young apprentice hunter, Robyn Goodfellowe (voiced by Honor Kneafsey), and her father, Bill (Game of Thrones’ Sean Bean), journey to Ireland to help wipe out the last wolf pack. But everything changes when Robyn befriends a free-spirited girl named Mebh (Eva Whittaker) from a mysterious tribe rumored to transform into wolves by night. Coming Soon to Apple TV+.

BBC America, in partnership with HBO Max is excited to bring together a new spotlight on Doctor Who and the series’ return to New York Comic Con with the Doctor herself, Jodie Whittaker, companion Yaz, played by Mandip Gill, and Graham O’Brien, played by Bradley Walsh. Together with moderator Melanie McFarland, TV Critic for Salon.com, they will look back at their epic past two series in the TARDIS, which have been packed with shocking twists, turns and surprises and discuss their favorite moments to date.

The Stand: Exclusive Q&A with Cast + Inside Look
Based on Stephen King’s iconic post-apocalyptic novel of the same name, the much-anticipated limited event series asks the question “where will you stand?” in the ultimate fight between good and evil. Join series stars Whoopi Goldberg, James Marsden, Greg Kinnear, Amber Heard, Jovan Adepo, Odessa Young and Owen Teague alongside showrunner Benjamin Cavell and executive producer Taylor Elmore, as they discuss bringing this epic story to life and what fans can expect when the series premieres December 17,

Smallville Cast | 20 Years of Fandom, Friendship & Flying
Join Tom Welling, Erica Durance, Sam Witwer, Laura Vandervoort, and Michael Rosenbaum on this look back at this groundbreaking show and a look ahead at what’s next for this Super-group.

A Discovery of Witches S2 | Behind the Magic
Take a journey to the fascinating and treacherous world of Elizabethan London as Sky original drama A Discovery of Witches returns for season two. Enjoy a sneak peek at the new magical series, adapted by Bad Wolf from Deborah Harkness’s bestselling All Souls trilogy, including an introduction by Deborah herself and Bad Wolf Executive Producer Lachlan MacKinnon, as well as a Q&A with key cast Matthew Goode, Teresa Palmer, Ed Bluemel, Adelle Leonce and Steven Cree who will gather from the set of the infamous Congregation- in Wolf Studios Wales –  where witches, daemons and vampires meet and where they are also filming season 3.

IDW Presents – The World of Locke & Key
Unlock what’s next in the world of Locke & Key, now a hit Netflix original series! Join New York Times best-selling author Joe Hill (Full Throttle, NOS4A2, Dying is Easy) and legendary artist Gabriel Rodríguez in conversation with series editor Chris Ryall, as they welcome you back to Keyhouse. Be the first to hear more about the next wave of comics and graphic novels in the Locke & Key franchise!

X-Men | The Art and Making of the Animated Series
Meet the creative team behind one of the most celebrated, revolutionary animated TV shows of all time as they discuss their new book, X-Men: The Art and Making of the Animated Series, by Eric Lewald (series showrunner) and Julia Lewald (series writer). The Lewalds are joined by other celebrated creators who helped make X-Men: The Animated Series, including Larry Houston (series producer/director), Rick Hoberg (series artist), Stephanie Graziano (production), and Sven Larsen (VP, Licensed Publishing for Marvel). Panelists will discuss what it’s like to develop, pitch, design, write, draw, direct, and produce a hit animated series, while showcasing never-before-seen production and promotional materials from the art book.

Marvel’s Black Panther: Sins of the King
Step into Wakanda with Emmy-nominated William Jackson Harper and the award-winning writing team for Marvel’s Black Panther: Sins of the King, from Serial Box. Get an inside look into the upcoming immersive e-book and audiobook series and be the first to hear an exclusive audio excerpt from William Jackson Harper (The Good Place), who will be narrating the series.

In Conversation with All the Anime!
Missed your regular fix of MCM Anime? Join familiar faces Andy Hanley and Jeremy Graves from Anime Limited as they give a rundown of All the Anime’s latest exclusives, festival features and new releases. Continue the conversation over on the NYCC x MCM Metaverse Discord channel when the panel is over!

The Jedi Mind – Lessons in Mindfulness from Star Wars
The code that all Jedi strive to follow offers principles for being at peace and learning. In fact, these tenets are useful not just in a galaxy far, far away, but here in our own world. While the Force isn’t present in our galaxy, we can still learn from how the Jedi use it to guide their lives. And we can use these lessons about the Force as a gateway to studying mindfulness and putting practices into action. Join us for an exploration of how the practice of mindfulness inspires and empowers some of our favorite Star Wars characters, and how we can bring some of that inspiration into our everyday lives. Panelists include Amy Ratcliffe, Managing Editor of Nerdist and author of The Jedi Mind; Ashley Eckstein, the voice of Ahsoka Tano on Star Wars: The Clone Wars and Star Wars Rebels, and founder of Her Universe; and Dr. Drea Letamendi psychologist and co-host of the Lattes with Leia podcast.

Find out about the complete New York Comic Con lineup at www.newyorkcomiccon.com.