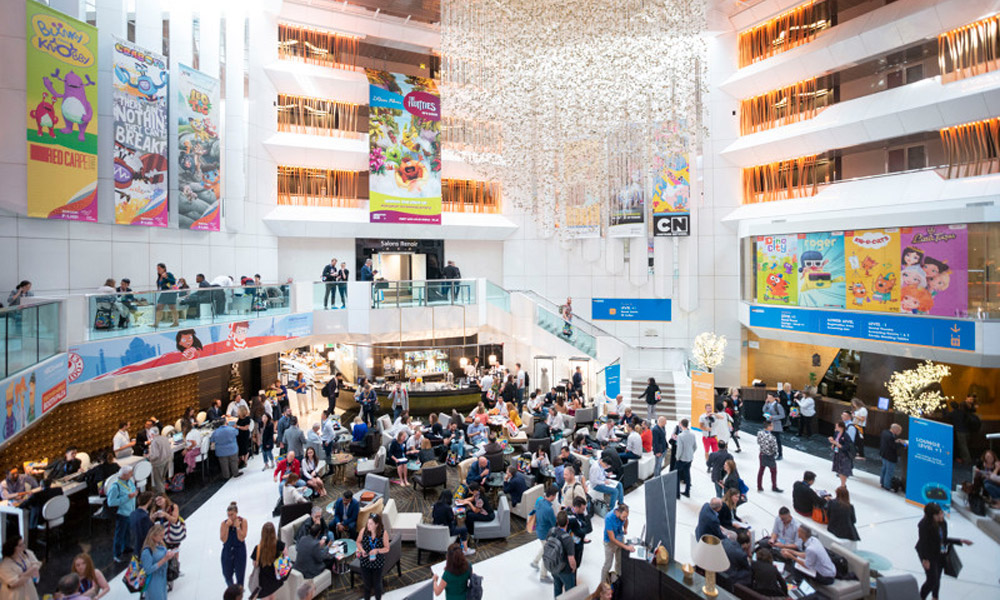 As many had predicted, the MIPCOM fall content market has now joined the ranks of this year’s industry events that had to shift to the virtual world due to the COVID-19 pandemic. The official Digital MIPCOM week is slated for Oct. 12-16, while MIPCOM and MIP Junior Online+ will go live Oct. 5 thru Nov. 17. For more up-to-date info, visit mipcom.com. Here are some of the animation highlights of this year’s event: 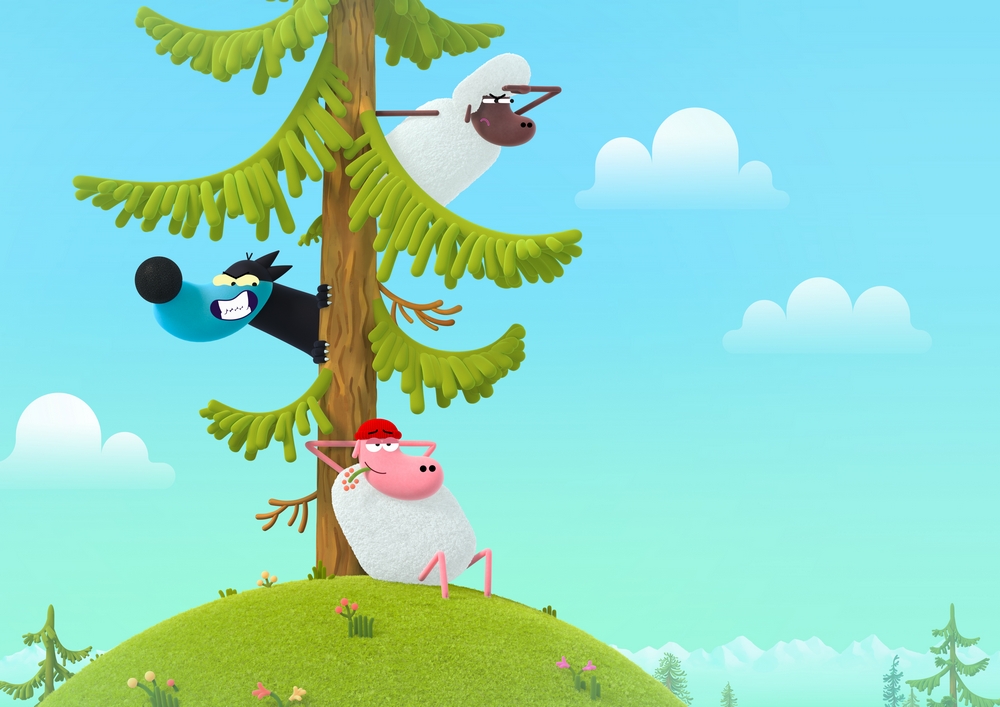 Ewe Will Love It!
Oscar-nominated French animation powerhouse Xilam (I Lost My Body, Oggy and the Cockroaches) continues its winning streak this fall as it will be launching its new slapstick comedy Trico (78 x 7-minute) as a Netflix-branded original for the world. The show, which is created by the studio’s own Hugo Gittard (Zig & Sharko, Magoo) is looking at an early 2022 delivery date. The colorful toon centers on a cosmopolitan sheep who is full of wild ideas and his friend Biscotte, a tough ewe who is always trying to keep his flock safe from the hungry wolf.

“We are thrilled to be undertaking this new collaboration with Netflix and feel honored by the trust they have placed in Xilam’s talents,” says Xilam founder and exec producer Marc du Pontavice. “Hugo has created a fantastic series which is brimming with endearing characters and original comedy — we’re sure Trico’s mishaps will charm and entertain audiences across the globe.” Fortunately, du Pontavice never pulls the wool over your eyes and always delivers! 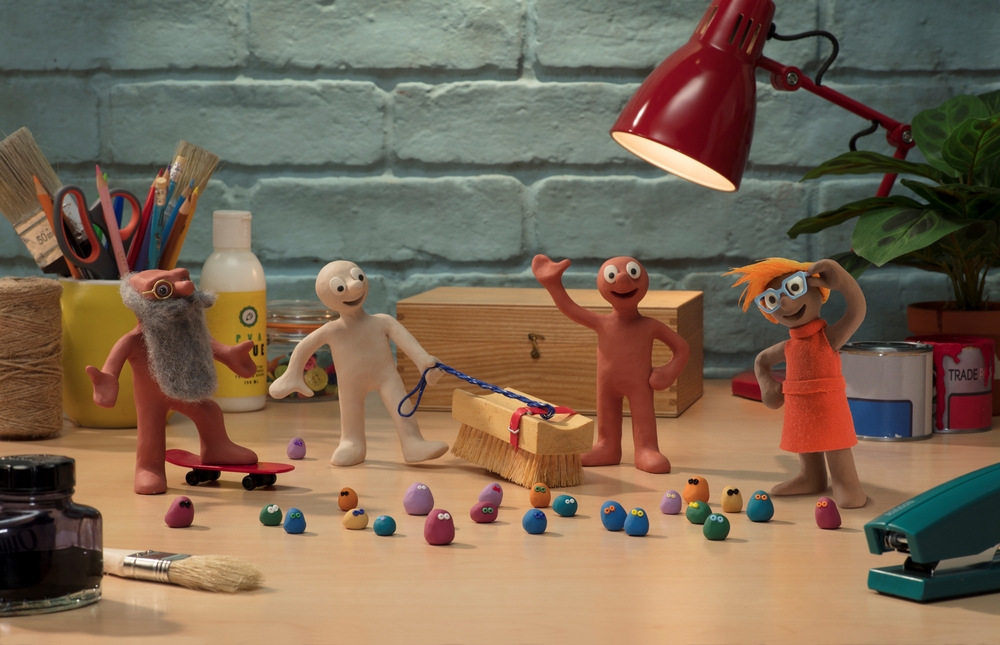 The Epic Adventures of Morph

A Plasticine Pal Is Back
The world was a kinder, gentler place when Peter Lord and David Sproxton introduced their first plasticine hero Morph in 1977. This year, a new 15 x 5-minute series titled The Epic Adventures of Morph will re-introduce the beloved Aardman character to the world. The show, which will debut on Sky Kids in late 2020, finds the clay-animated hero embark on new dialogue-free adventures with his sidekick Chas, and old buddies Delilah, Grandmorph and The Very Small creatures. We can’t wait to feast our eyes on this stop-motion show from the very masters of the art form. 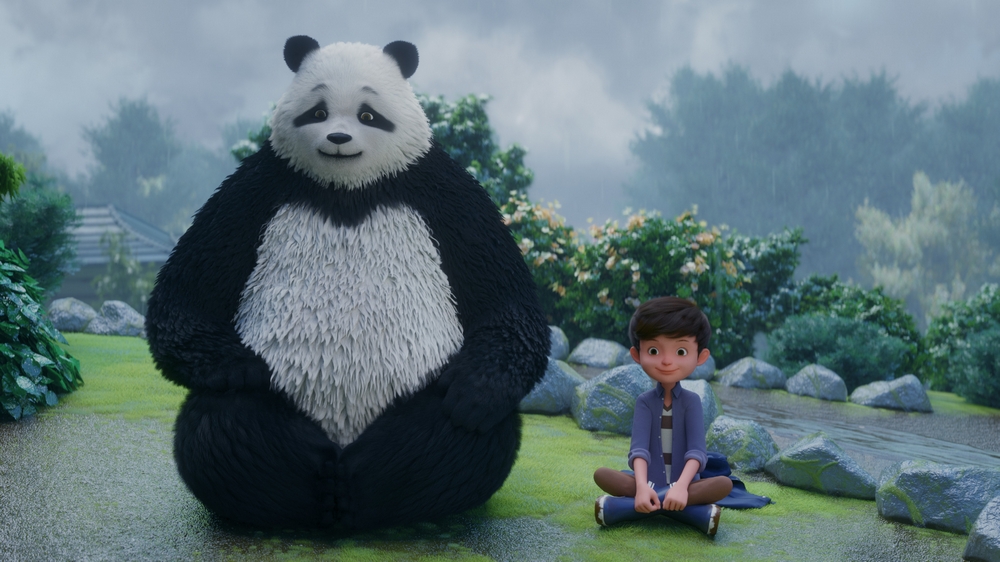 Zen Master Panda
What better time to introduce kids to the art of being Zen and mindful than the mind-boggling madness that we’re all going through? The good people at Gaumont Animation and Scholastic Ent. have produced a series based on Jon J. Muth’s books Zen Shorts, which will arrive on Apple TV+ on Dec. 4. The show is called Stillwater, after the central character who is a wise panda bear and teaches the three human siblings Karl, Addy and Michael about mindfulness tools that help them face day-to-day challenges of life.

Exec produced by Sidonie Dumas, Christophe Riandee, Nicolas Atlan, Terry Kalagian, Iole Lucchese, Caitlin Friedman, Jef Kaminsky and Rob Hoegee, this timely toon features the voice talents of James Sie, Eva Binder, Tucker Chandler and Judah Mackey. This is probably one of the most essential family shows of the year, because as another wise panda once said, “Nobody comes back from their journey the same as they were before.” 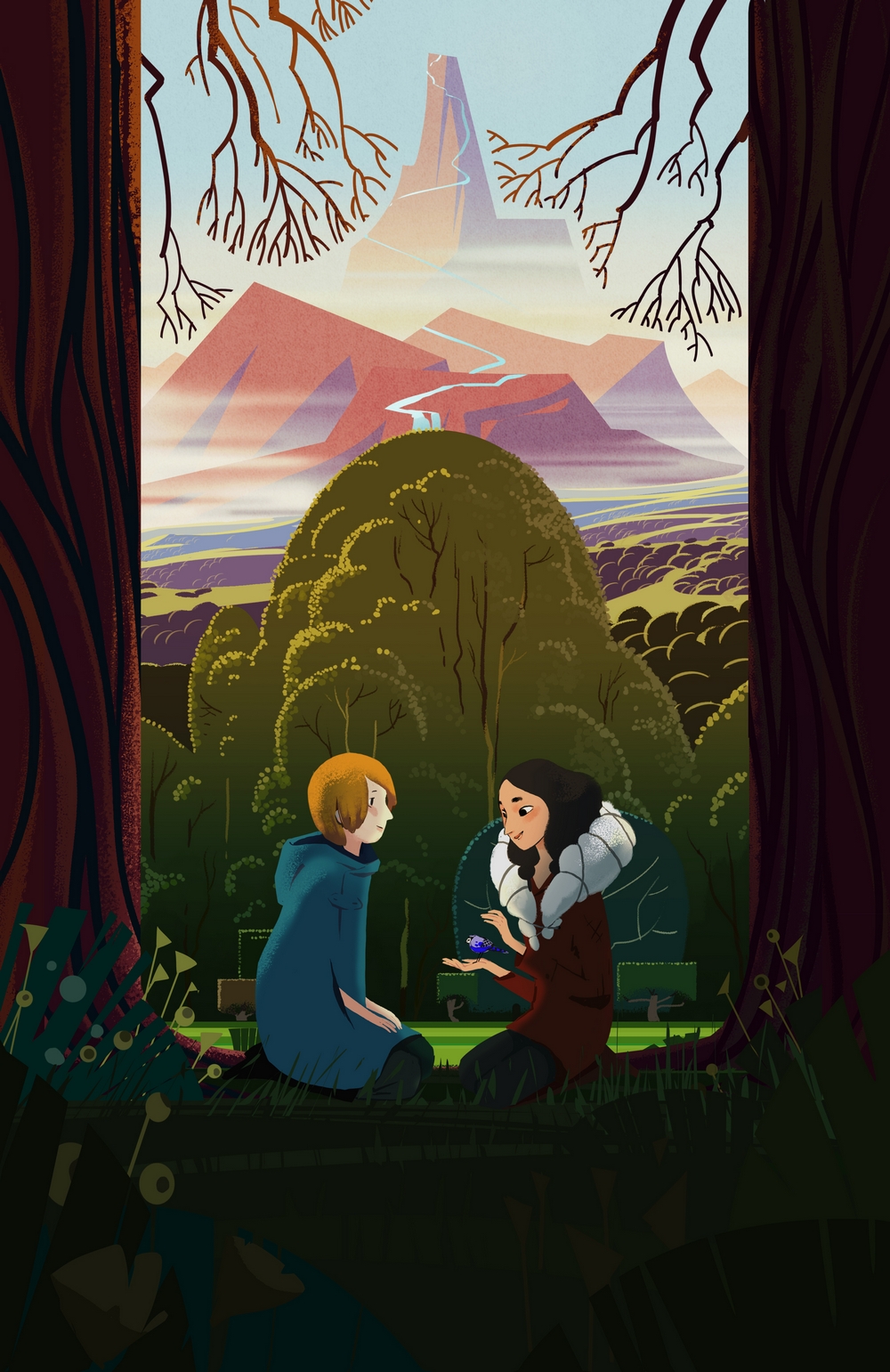 Serialized Sensation
“As an adult, it’s very rare when you read a children’s book that sticks in your head for many years,” says French studio Dandelooo producer Emmanuèle Petry Sirvin. “That’s what happened to my partner Jean Baptiste [Wéry] and me when we read Jean-Claude Mourlevat’s novel The Upside Down River. All the ingredients are there to touch your heart — adventure, friendship, fear, love, nature, humor, imagination and fantasy. We hope our adaptation will be as good, well even more beautiful, than Jean-Claude’s novel.”

Dandelooo’s upcoming 9 x 26′ 2D-animated version of the novel follows a young girl’s search for water drops from the Qjar river in order to heal her sacred bird, who begins a fantastic quest along with Tomek, a shy boy who falls in love with her. The serialized project, which is co-produced with Canal+ Family, will be directed by Paul Leluc. Sadly, we all have to wait until mid-2022 to enjoy this beautiful adventure unfold. But that gives us plenty of time to find the book and fall under its spell just like Petry Sirvin did. 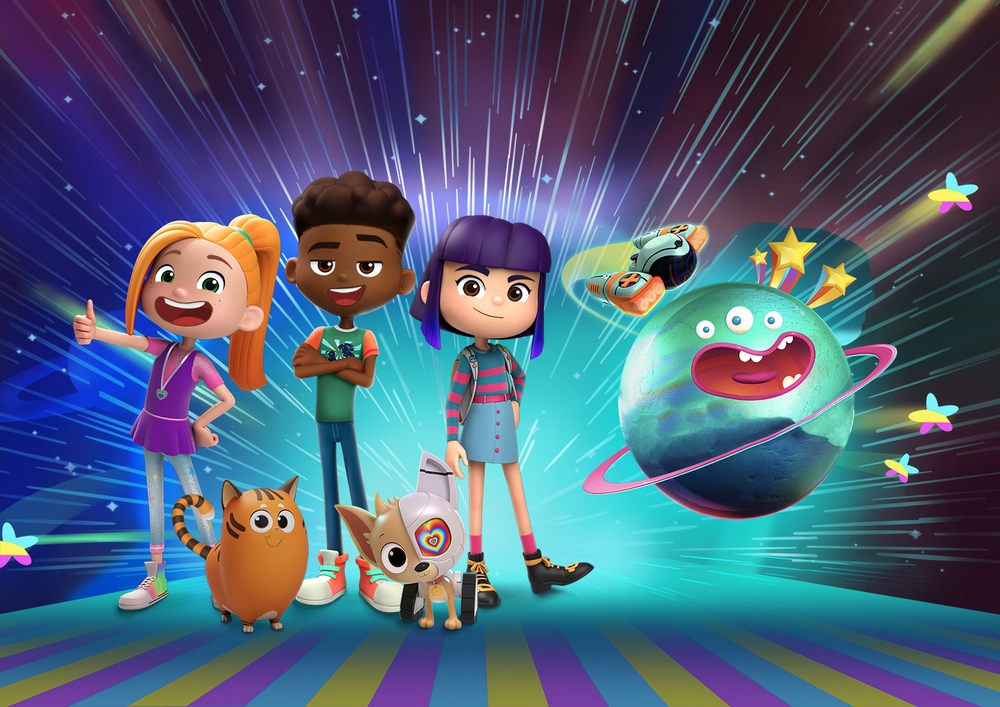 In Search of Intelligent Mini-Lives
There are lots of reasons to love Studio 100‘s latest 52 x 11’ animated show FriendZSpace. Created by industry veteran Dan Clark (Team Smithereen, Alien Xmas) and Oscar Covar, and co-produced with T&B Media and Flying Bark, the CG series is about human kids Alice, Leo and Kim and BotDog (half-puppy, half-Swiss-army-knife pet) who travel through space in their star cruiser to make friends with alien children in distant planets. Of course, making friends with alien kids can be challenging: Some live in the bushy eyebrows of a dangerously moody slobbering beast, while the kids from another planet are so colossal, our heroes need to climb them like skyscrapers just to say hello!

“FriendZSpace is a fast-tracked, action-packed, and super funny character-driven animated comedy which is all about embracing our differences and getting into exciting trouble in the process!” says Dorian Buehr, Studio 100’s head of global distribution.”A signature element in the series is that every alien kid wants to be friends in the end, but to get there will rarely be easy. Different customs, funny alien biological quirks, and pressing narrative events create comic complications that must be overcome!” Frankly, you had us at BotDog and alien babies that live in giant eyebrows! 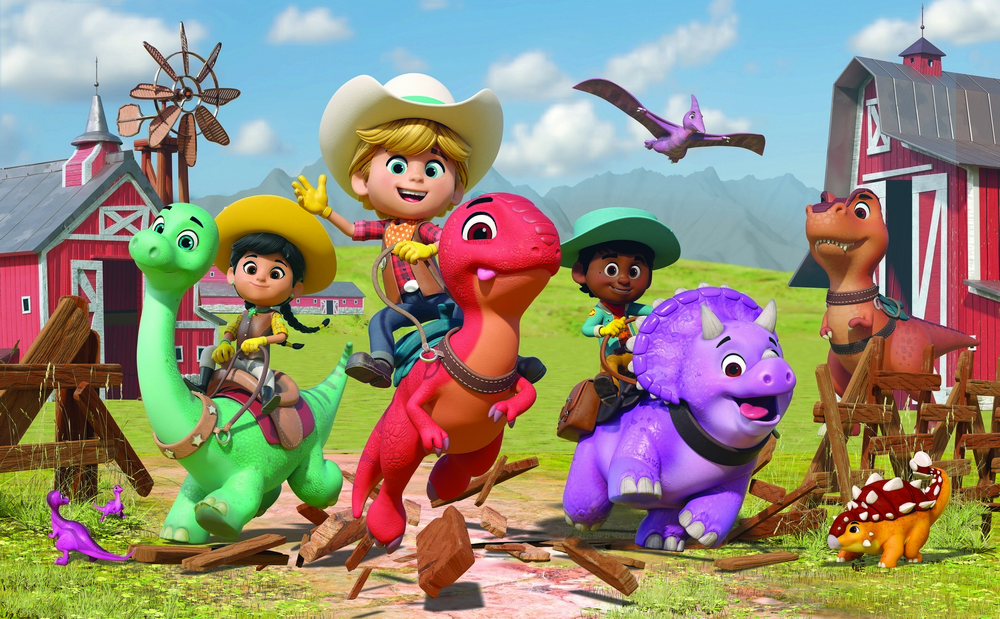 Git Along, Little Dinos
Cowboy kids and their dinosaur buddies — now that’s what we call a perfect recipe for a perfect preschool show! Boat Rocker‘s latest 52 x 11’ animated series Dino Ranch is created by Industrial Brothers co-founder Matt Fernandes and follows the adventures of three young rancher siblings who learn the ropes of navigating the great outdoors with their dinosaur buddies in a pre-westoric world. As Jon Rutherford, managing director of Boat Rocker Studios, tells us, “Matt’s unique vision of combining cowboys/cowgirls and dinosaurs has huge global appeal, with eye-popping animation and carefully crafted comedic storylines.” We weren’t surprised to learn that the show will begin roaming the wild frontiers of Disney Junior in the U.S. in 2021! 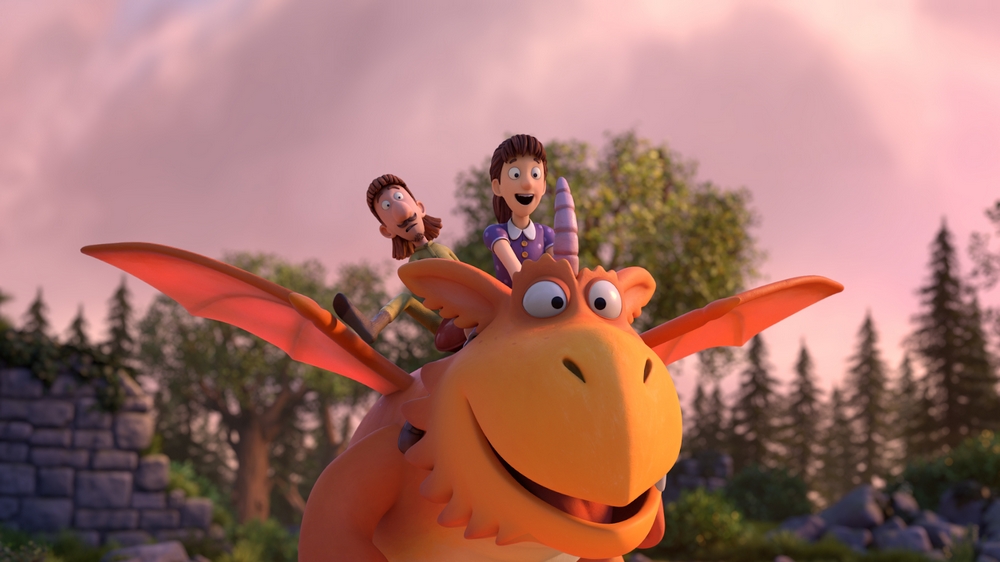 Zog and the Flying Doctors

Flying Doctors’ Orders
A couple of years ago, the world fell in love with a charming heroine named Pearl and her accident-prone dragon friend in Magic Light Pictures’ Emmy-winning short Zog. Now producers Michael Rose and Martin Pope and director Sean Mullen are following up with a half-hour sequel titled Zog and the Flying Doctors. The CG-animated adventures finds Zog as the trusty air ambulance for flying doctors Pearl and Gadabout. However, when bad weather forces them to land at the palace, Pearl is locked up by her uncle, the King, who doesn’t think that princesses should be doctors. Booo!!!

The show is already set to premiere in the U.K. on BBC One as a highlight of its upcoming Christmas schedule and in German with partner ZDF. Magic Light Pictures’ co-founder Martin Pope tells us, “It’s fantastic to bring this companion title to our distribution partners all over the world. Zog has picked up many prestigious awards and nominations that we’re delighted with. So it’s wonderful to join Pearl, Gadabout and their trusty friend for the next stage of the adventure.” Frankly, this is the only flight that seems both safe and enjoyable to take in 2020! 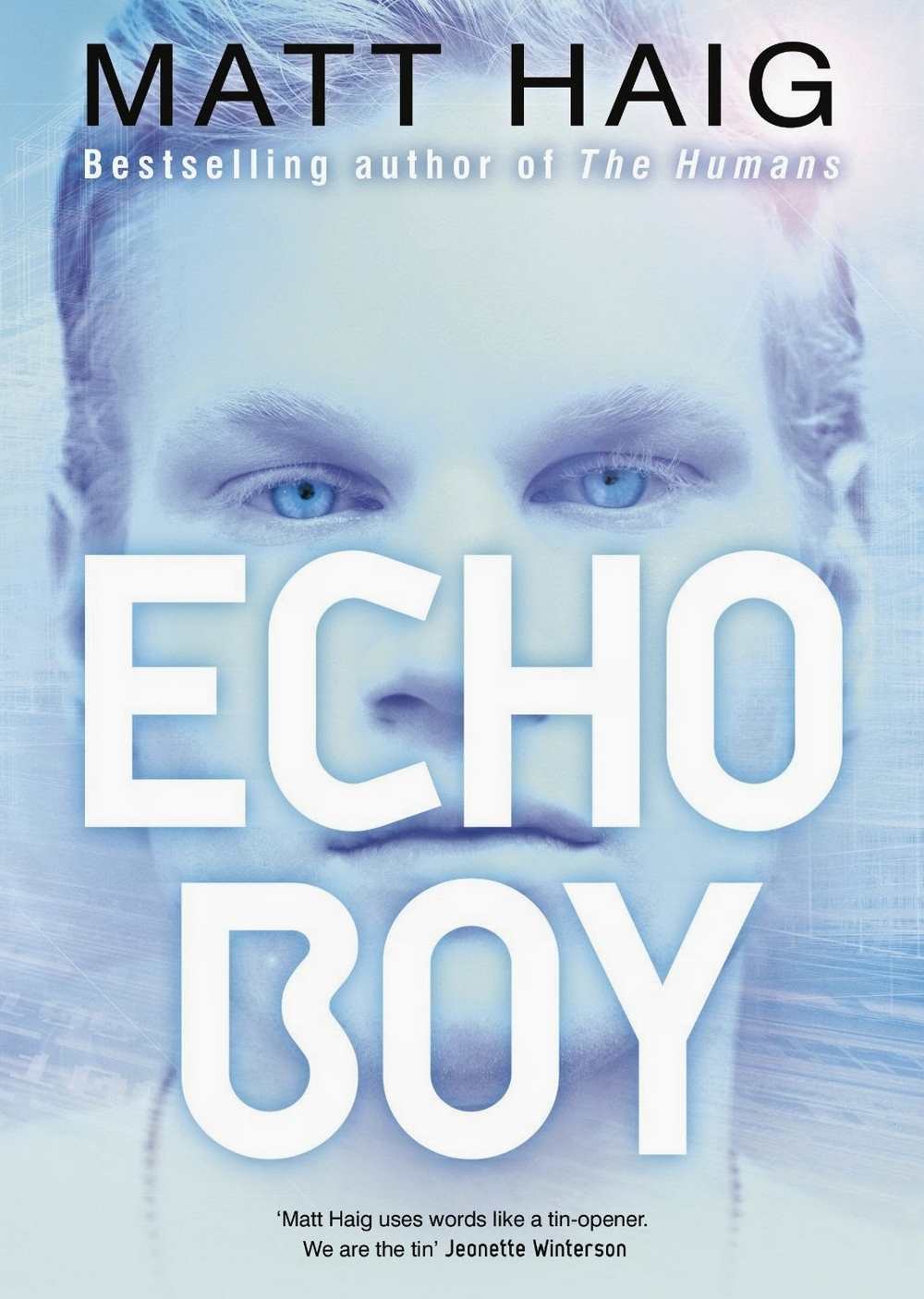 Not All Bots Are Evil
Amsterdam’s hot animation studio Submarine, which is busy working on the second season of Amazon’s acclaimed Undone, has another interesting project in the works. It’s a hybrid live-action/animated series based on Matt Haig’s best-selling sci-fi novel Echo Boy. Set in the year 2115, the series centers on a teenager named Audrey Castle whose life is shattered after her parents are murdered by a malfunctioning humanoid robot. However, when Audrey meets a thinking, feeling prototype named Daniel, she is forced to grapple with her prejudices, fears and the idea of what it means to be human.

Submarine is partnering up with long-time collaborator Tommy Pallotta, who co-developed the rotoscope technique used in A Scanner Darkly, Waking Life and Undone. “Matt’s book is futuristic but also intensely human — and has the combination of an original world and resonant truth we look for in a story,” says Femke Wolting, Submarine’s co-founder and co-managing director. May the good bots save us from all the horrible humans someday soon! 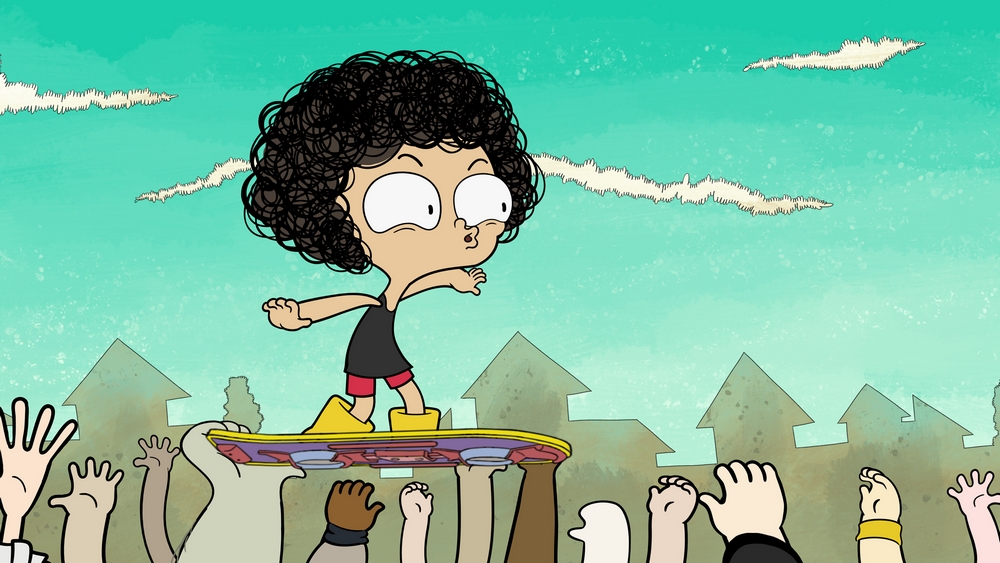 Suffering Sibling
The poor, forgotten nine-year-old star of Cartoon Network Brasil and Copa Studios‘ animated series Jorel’s Brother is so overshadowed by his infamous sibling that he is actually nameless! Yet, the shy nine-year-old strives to be as popular as his brother and he always manages to find a crazy solution to the many challenges life and his unusual family throw at him. The 104 x 11′ (and 18 x 2′) series is created by and based on the childhood of famous Brazilian actor, writer and MTV presenter Juliano Enrico, who also voices Jorel! Cake Distribution is handling worldwide rights (except Latin America) for the International Emmy-nominated show, which targets eight to 11-year-old audiences. While a fourth season is set to air later this year, we have it from reliable sources that the poor bro continues to be nameless. 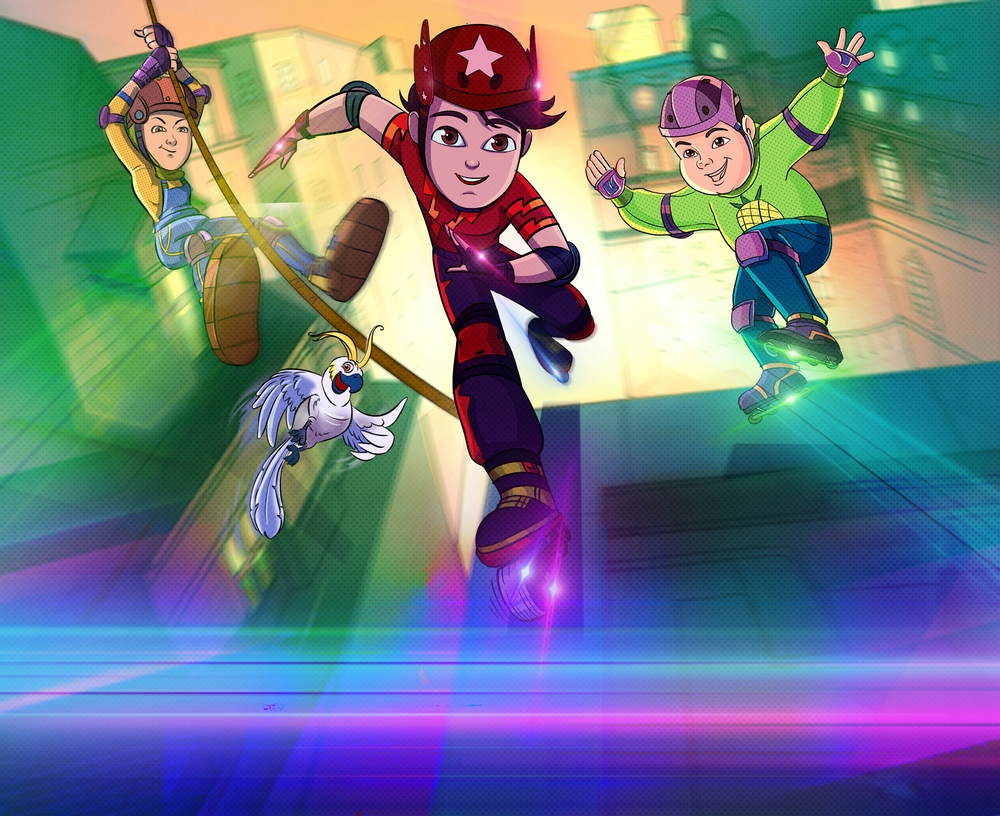 Fighting Evil in Jakarta
India and Singapore-based animation studio Cosmos-Maya and Spectrum Film have joined forces to produce a new CG-animated show about a modern-day local Indonesian boy who becomes an action hero. The 52 x 11′, which is called Putra is described as an action-comedy which follows the adventures of a brave kid who investigates crimes with his friends Iss and Budi. Iss’s coding skills help Putra solve complex puzzles, while Budi’s habit of excessive eating invites unnecessary troubles.

“We have seen our homegrown Indian IPs performing wonderfully in Indonesia,” says Anish Mehta, CEO of Cosmos-Maya. “Putra gives us the opportunity to directly cater to a large, rich, digitally-advancing and diverse market allowing us to make homegrown content tailormade for local consumption in a foreign territory. There is no better time for us to make this move into the Indonesian animated content space, and there is no better partner for this than Spectrum Film.” 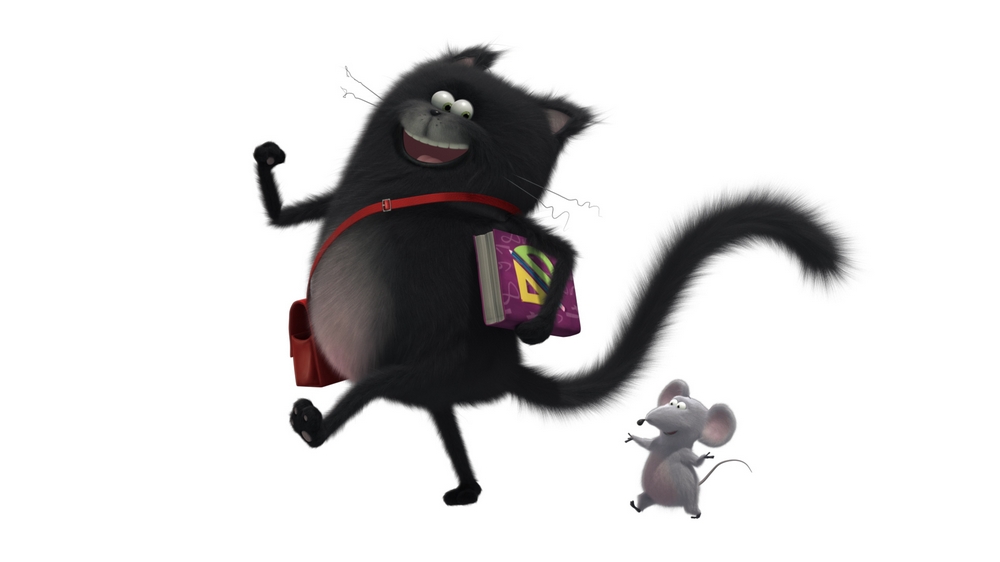 Cat and Mouse Games
When children’s author and illustrator Rob Scotton published his book Splat the Cat, millions of readers around the world fell in love with his delightful black feline central character and his good friend, Seymour the Mouse. Now, thanks to the efforts of Paris, Angoulême and Montreal-based studio Blue Spirit, the charming property is being adapted into a 52 x 11′ show called Splat & Seymour, aimed at four- to seven-year-old viewers. The show is being directed by French toon veteran Jean Duval (Mini Ninjas, Doogal). Blue Spirit, which has worked on features such as My Life as a Zucchini and The Prince’s Voyage, is also bringing three other award-winning shows to the fall markets this year: Alice & Lewis, The Mysterious Cities of Gold and Arthur and the Children of the Round Table. Congrats to producer and general manager Arnelle Glorennec for the studio’s fantastic output this year. 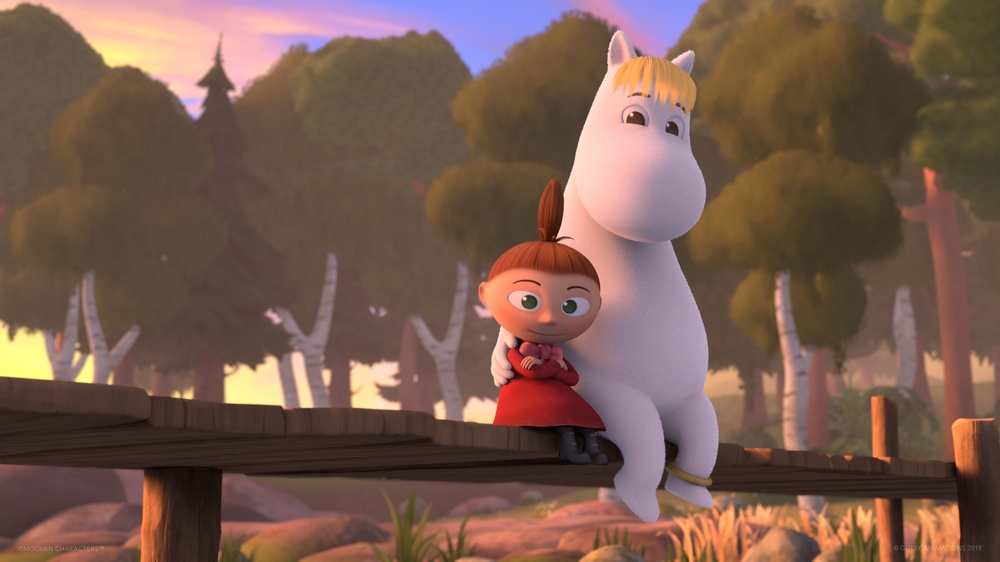 MoominvalleyDouble Delight
PGS Entertainment has two terrific animated shows in its catalog this fall season. The global content distributor recently picked up Wonderstorm’s Emmy-winning series The Dragon Prince, which has received universal acclaim (100% “Fresh” rating on Rotten Tomatoes). The epic show, which debuted in September of 2018 on Netflix, is created by industry veterans Aaron Ehasz (Avatar: The Last Airbender) and Justin Richmond (Uncharted 3) under their Wonderstorm banner and has already been greenlit for four more seasons.

The company’s other big new property is the charming adaptation of Tove and Lars Jansson’s beloved Moominvalley series, which is produced by Gutsy Animation and commissioned by YLE, Sky and NHK. Few can resist the charms of the Finnish-Swedish tales about Moomintroll and his family and friends as they venture beyond their familiar valley to experience new adventures. The 26 x 22′ series’ other media partners include PCCW, France TV, ZDF and Amazon. What a way to embark on a new fall season of animated entertainment.