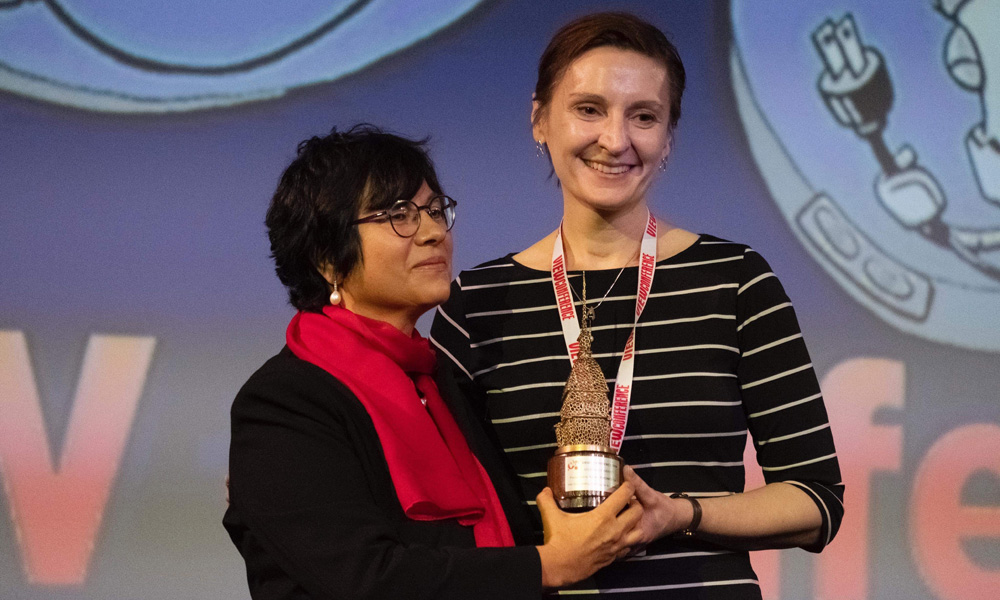 The first-ever VIEW Visionary Award was bestowed on multiple award-winning writer and director Nora Twomey. The co-founder of Kilkenny, Ireland-based Cartoon Saloon directed the studio’s Oscar and Cristal nominated film The Breadwinner, which won the Annie Award for best animated feature and received a special award at Annecy this year. Previously, Twomey co-directed The Secret of Kells, which received Oscar, Annie, and Cristal nominations, and she was the head of story for Song of the Sea, which was also nominated for an Oscar for best animated feature.

“These three 2D animated films exemplify Nora Twomey’s exceptional artistry,” said VIEW Conference Director, Dr. Maria Elena Gutierrez. “The first two honor Irish history, and they are beautiful. With The Breadwinner, Nora has created a story of a young Afghani girl’s struggle using stunning visuals that honestly portray real-life issues. The bravery and creativity that Parvana shows is inspirational. Parvana and her creator Nora Twomey give everyone hope that we, too, can survive dark times with courage and imagination. It is a film that matters.”

The film is based on the book by Deborah Ellis.

In the film competition, the VIEW Award for Best Film went to Pixar veteran Carlos Baena’s buzzworthy horror film La Noria, a CG animated U.S./Spain production. The short centers on a young boy who loves to draw and build toy Ferris wheels, who encounters some strange creatures that will turn his life upside down.

Learn more about the event at www.viewconference.it.