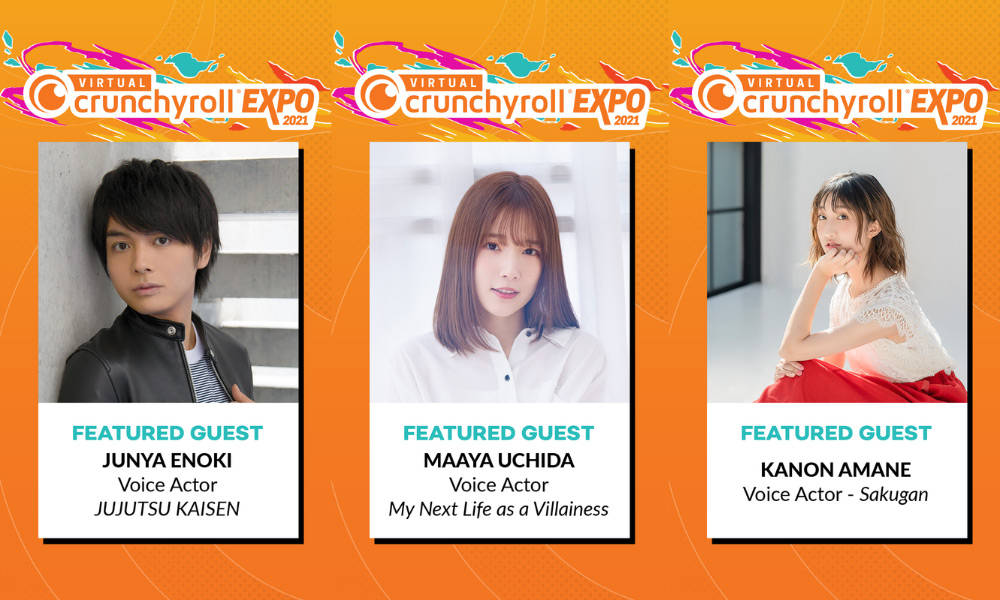 Virtual Crunchyroll Expo (V-CRX) is planning a sizzling experience for anime fans this summer! On top of announcing the next slate of guests heading to the event in August, including voice actors and staff from hit titles, and the debut of a brand new original series.

From the smash-hit dark fantasy series JUJUTSU KAISEN, Virtual Crunchyroll Expo will welcome Junya Enoki, the voice of Yuji Itadori (also known for his work as Pannacotta Fugo in JoJo’s Bizarre Adventure: Golden Wind, Nasa Yuzaki in TONIKAWA: Over the Moon for You, Jack in BEASTARS and Senjuro Rengoku from Demon Slayer -Kimetsu no Yaiba- The Movie: Mugen Train, among many others).

V-CRX will also welcome Maaya Uchida, voice of Catarina Claes from My Next Life as a Villainess: All Routes Lead to Doom! X. Uchida is also known for her roles as Melty Melromarc in The Rising of the Shield Hero and Norman from The Promised Neverland. On the panel for the show, Maaya will be joined by Sumire Uesaka, who plays the part of Susanna Randall.

SAKUGAN is an original anime following a father and daughter on an epic journey that brings them face to face with danger in order to uncover the truth. The series, which will stream the world premiere at Virtual Crunchyroll Expo and officially premieres on Crunchyroll this October, is bringing two guests to V-CRX: Kanon Amane, the voice of Memempu, the heroine of SAKUGAN (Amane was chosen for the role out of more than 1,400 applicants!) and producer Takayuki Funahashi.

Streaming on Crunchyroll this summer, Girlfriend, Girlfriend follows the story of a triangular relationship as one high schooler dates two girlfriends at the same time! Guests from the show include Ayane Sakura, the voice of Saki Saki (also known for her work as Ochaco Uraraka in My Hero Academia and Gabi Braun in Attack on Titan, among many others. Azumi Waki, the voice of Nagisa Minase (also known for her work as Hinata Tachibana in Tokyo Revengers) and Junya Enoki, the voice of Naoya Mukai — who is at the center of the love triangle.

In the horror mystery anime The Night Beyond the Tricornered Window, bookstore employee Mikado has a fateful encounter with an exorcist named Hiyakawa and must help out with exorcism duties. Attending V-CRX ahead of the series premiere in October will be Nobunaga Shimazaki, voice of Kosuke Mikado (also known for his work in Black Clover as Yuno, Fruits Basket as Yuki Sohma and Free! as Haruka Nanase) and Wataru Hatano, voice of Rihito Hiyakawa (also known for his work in My Hero Academia as Causative).

V-CRX also announced that DJ TeddyLoid will be the next musical guest, playing a special set at the halftime show for Crunchyroll-Hime’s Cosplay Cup.

Finally, Virtual Crunchyroll Expo is on the lookout for the best pet cosplay! During the pre-show for Crunchyroll-Hime’s Cosplay Cup, V-CRX wants to feature the cutest and coolest pets in their most dashing cosplay. Submissions are currently being accepted on Twitter now using the hashtag #VCRX alongside your pet’s name, their character, and a photo of your furry friend in their best anime attire.

Netflix Teases the Ancient Alien Secrets of ‘Spriggan’
First-Look: ‘Nightmare of the Wolf’ Slated for August 23